What in the HELL??? First, there was the McLaren MP4/21 with its "viking horns": 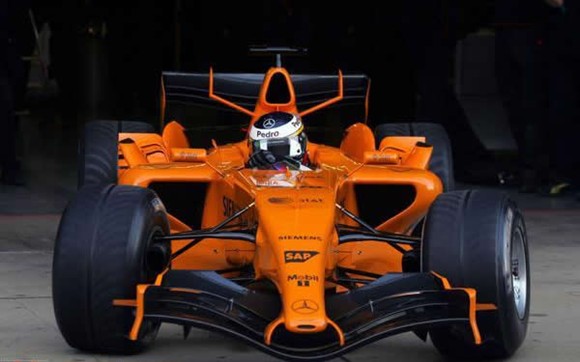 At the time, these were radical and crazy...

Then, there was BMW and their very short-lived vertical nosefins: 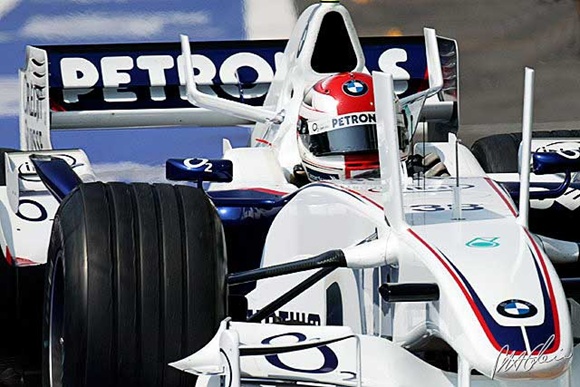 Ugly AND dangerous, what more could you ask for?

Now Honda wants to get into the act: 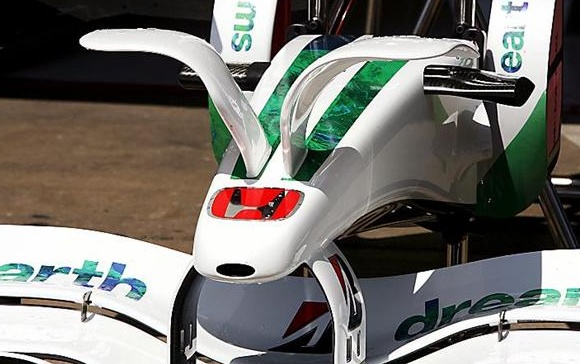 Honda: Because our livery isn't ugly enough yet...
It's unknown if they'll be running the "handlebars" in the race, but they're in the paddock at least.

Everybody wants to make a fashion statement.  ;-)

They remind me of the ears on that waskally wabbit on the Trix box.

Before I scrolled down far enough to see your caption on the BMW picture, my reaction was "Man, those look dangerous!"

I can't figure out what it is that Honda is trying to achieve with that new one. It looks like it will lift the front wheels, which is Not A Good Thing. Less traction for steering? Eek!

4 I bet they're trying to control turbulence vortices with them, aren't they? And that's also what the two lower ones in the front are for, too, right?

Good lord... They better be getting a substantial improvement in overall Cd downstream for the extra costs those rabbit ears are going to add. Those are giving you extra form, friction, and interference drag while degrading downforce. Sometimes it looks like they just throw s#$t at the wall and see what sticks.

Steven are you referring to the two arms coming out of the bottom of the nose? I think those are what actually hold the front wing up.

I'm guessing those other little dealies on the top of the wing are telemetry pitot tubes.

I see what you mean about the two lower ones. But the upper ones still look like a really bad idea to me.

7 The lower ones are part of the assembly attaching the front wing to the nose, yep.  I assume they're aerodynamically effective, too, but their main purpose is to keep the wing on.

The black items sticking out from the left and right of the nosecone are FIA-designed, approved and mandated camera pods, or at least one of them is.   Every F1 car has mounting spots for them.  The usual arrangement is one camera pod and one pod with no camera.  The car has to be designed to run with them attached, obviously, and since every team has to have them, there's no penalty or advantage to having/not having them mounted.  In fact, I've seen, once or twice, a car (usually a Renault) with only one mounted.  I have no idea how that doesn't affect the aero, but they know what they're doing.

On the front wing itself, the items directly below the "h" on the left and the "a" on the right aren't telemetry antennae at all.  They're adjustable... call them clips, I guess... that keep the wings a set distance apart, so as to prevent them from being termed "movable aero devices," which are no-nos in the FIA rulebook.  They're adjustable so the teams can widen or lessen the gap between the two wing planes as needed.

You might notice the black oval right on the tip of the nose?  Believe it or not, that's a hole, and it's the only cooling system the driver has in a F1 car (some teams, like McLaren, have two holes in or around the nose: one for the driver, and one for the Electronic Control Unit; it depends on where the ECU is mounted on the car).

I haven't the faintest idea what Honda is driving at with the handlebars.  It sure LOOKS like they'd help the car get airborne, but Honda has one of the better aero teams in F1 (which makes last year's debacle so suprising), so again, I assume they know what they're doing...