Well THAT Was Unexpected As I always do... always... I got up at 630am today when my cellphone alarm went off.  For the next half-hour, I did the my usual routine: brushed my teef, took a shower, that sort of thing, y'know?  As I got out of the shower in the dark (I haven't showered with the lights on in 20-some-odd years... no I don't know why), I noticed a small flash of red light from my cellphone, sitting there on the sink.

This elicited a sigh from me.  Such a red light this early in the morning is never good news, as it signifies either a missed call/voicemail or a text message.  Perhaps an employee checking in to let me know that they're sick, or a misguided telemarketer, maybe a wayward text from Brickmuppet, or occasionally a weather alert from a local TV station.  Well, whatever it was, it could wait a few minutes while I dried off and got dressed.  This I accomplished, short of putting on the shirt I'd be wearing into the store that day... fewer wrinklies that way, don'tchaknow?  Sitting in front of the computer, I finally took a moment to see what was so important that it deserved my attention at 7am.

It was both a text and a voicemail from Duck U's Alert System.  "Due to weather conditions, the Duck U campus and offices are closed today."  I... what?  As it turns out, the fog/drizzle that was just beginning when I got home Thursday night never actually stopped, and all of Duckford had an unpleasant glaze of ice over it.  Heck, even Duckford Mass Transit had taken all their buses off the roads to keep them from, I dunno, ending up inside people's houses or where-ever they'd wind up after an unfortunate skid.

So, after contacting the employee who was to be working with me today and telling her not to come in, telling my boss that we were closed, re-recording the store's voicemail message from home, and double-checking with Duck U security that yep, campus was closed, I finally decided to go see what it was like outside.

Ice.  Ice everywhere.  Oh, don't get me wrong, it wasn't thick ice... news reports says less than 1/10th of an inch... but you don't need much to turn streets into skating rinks.  I didn't even try to head over to the DuckMobile.  I could see the sidewalk and parking lot were more appropriate for a Blackhawks game than for driving.  With that, I walked back into Pond Central, switched into a pair of sweats and fuzzy slippers, and proceeded to completely enjoy my first not-normal (i.e., not holiday or weekend, not like I've had many of those either) day off in five months.

Unsurprisingly, I did christmas shopping (thank you, Internet!) then took a very long, very needed, nap.  Tomorrow is grocery shopping in preparation for our first real snowfall of the season (well, that and I'm out of stuff), and Sunday is laundry day and getting ready to go back to work on Monday, but at least for today, I could do what I wanted... and it was good. 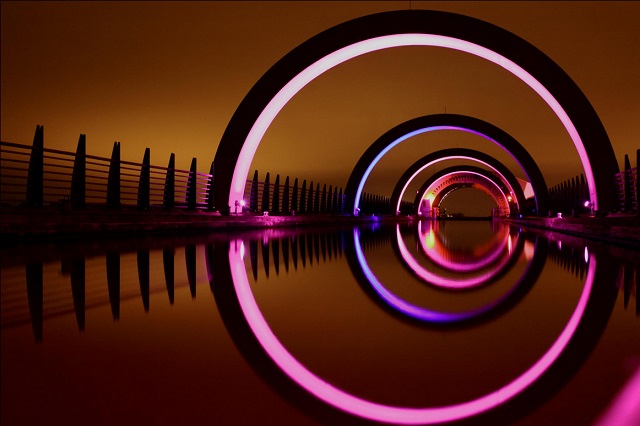 1 What is that picture?

2 It's the Falkirk Wheel, Steven.  Arguably the coolest piece of technology today, and the world's only rotating boat lift.

3 I'd seen the Falkirk Wheel before, but didn't recognise it from the photo either.  Looks more like a still from a movie version of Red Planet.

4 Every so often you see things and say to yourself, yep, we really are living in the 21st century.

5 That is an amazing photo.

6 Hooray for surprise downtime that doesn't involve having something terrible happen first!