Well Of COURSE! How Could We Be So Blind? We have it on good authority that everything will be a-okay for the Grand Prix of Korea on Sunday.  Who says?  Why, a personage who has absolutely nothing riding on the way the track handles, has no vested interest in the success of the race: 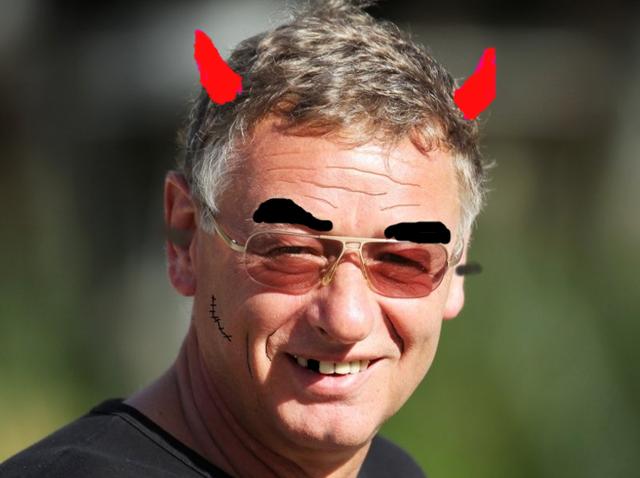 Hermann Tilke.  Yes, the designer of the Korea International Circuit hisownbadself has come out saying that the race will be exciting.  Hully-gee, how could we have been so blind as to have ever thought that there'd be some problems with the race?

Tilke: "I think on Friday the track surface will be very, very slippery because it is brand new. That means you will probably see some spinning."   Gosh, ya think?  Thanks for the update, Mr Track Designer!  It's not like spinning and crashing in practice might be a problem or anything, though it would be exciting, in a NASCAR sort of way.

Tilke: "And, it will not be easy to find the set-up for Saturday and Sunday because the track will change a lot. That means some drivers will make the wrong set-up choice, because you are going to have to second guess what is the right way to go."  So expect an HRT to be on pole, because their car is so bad a screwed-up setup won't make a difference.  Still, that'd be exciting, I guess.

Tilke: "After some practice the track will improve a lot, because they lay down their rubber, and that will produce some grip. But off the ideal line it will be very slippery - a big challenge for drivers."  In other words, expect a processional, because nobody will dare get off the driving line for fear of ending up somewhere around Jeju-teukbyeoljachido.  Exciting indeed... everybody loves a parade!

Tilke: "The main systems will work fine, but maybe here and there, there might be some small things that are not working."  Like asphalt coming up in foot-long chunks.  Or curbs turning into red-and-white painted gravel the first time a car bounces over them.  Or missing drain covers.  All of those things spell raw, unadulterated excitment with a capital 'E'!

Tilke: "And because the track is not tested, as it got ready very late, there will probably be a few surprises as well. But all the main things will be okay."  Everybody loves surprises, particularly someone driving a F1 car at 190mph!  I guess it's a good thing that there practically no grandstands, since otherwise they'd sell you the whole seat, but you'll only be using the edge.  I'm so excited, and I just can't hide it... I'm about to lose control, and I think I like it!

So there you have it!  Hermann Tilke assures us that Korea will be the bestest race on the calendar evar!!!1!11!!@!eleventy!!!

And if you can't trust Hermann Tilke, who can you trust?  I mean, really?

If I were one of the drivers, my goal would be to finish the race without destroying my car or dying in a crash, and be damned to what position I finished. This track is sounding more and more like a threat to health and well-being.

Has there ever been a case where the judges decided a track was too dangerous, and stopped a race?

I guess a different way to do that would be to order the safety car out and just let it lead a processional until the  race is over. (Ever been a race where the winner followed the safety car over the finish line?)

2 To your first question, the answer is "no, but...".  The drivers have gotten together and protested a track.  The old Spa "triangle" circuit, for example, went away for that very reason.  Niki Lauda tried to lead a boycott of the Nordschlieffe circuit of the Nurburgring (aka "The Green Hell") for safety reasons.  The drivers as a whole voted against the boycott... and Lauda had his terrible accident that nearly killed him.

For your second question, the answer is "yes, but...".  Races end behind the safety car all the time, though not recently in F1.  Weather or accidents bring out the SC late in the race, and before the debris is cleared or the rain slows either the timer runs out or the lap counter does.  So it's not common, but it does happen... but that's not exactly what you mean.  The closest I can think of to your question would be the Japanese Grand Prix from three or four years ago, which started behind the SC because of heavy rains.  The SC stayed out for nearly a third of the race.

The thing is, the FIA has judged the track safe.  Therefore, they believe that everything'll be fine... because they say so.  *cross wingtips*

3 Maybe the devilish Herman's idea of exciting is the sound of million-dollar cars crashing into each other on an untried track.  Can the almighty F1 not put their practice rules aside for this one race, or at least offer a special practice session?  I'm sure the Gods of Racing would understand.  As would the fans, who  value the lives of  the drivers.

4 To listen press report it, drivers uniformly proclaimed the track great after walking it. Everyone expected it to be extremely slippery, but nobody questioned safety.