Vividred Operation Ep08 After looking back at it, I realized that I've been dealing with this bronchitis thing for three darn weeks.  No wonder I'm so bloody tired!  At least the antibiotic has been working its magic upon me for these past seven days... I feel a lot better.  Now, I'm sure y'all are reading this and saying something to the effect of "well, that's nice, Wonderduck, but what, exactly, does this have to do with Vividred Operation?"  A fine question, and I'm proud of you for calling me on it.  Keep the duck honest, I always say.  Well, since I feel better, I'm much more likely to do a good job with this writeup!  I mean, the last two have been done while I've felt miserable, so this one oughta be fantasmic!  Or something like that.  I dunno.  We'll find out.  As you may remember, at the end of last week's episode the RHF had been zorched by a seemingly-defeated Alone and was plummeting from the sky while the rest of Team Aquos watched helplessly and Hot Dark Girl Rei chuckled darkly to herself.  So where do we start this episode? 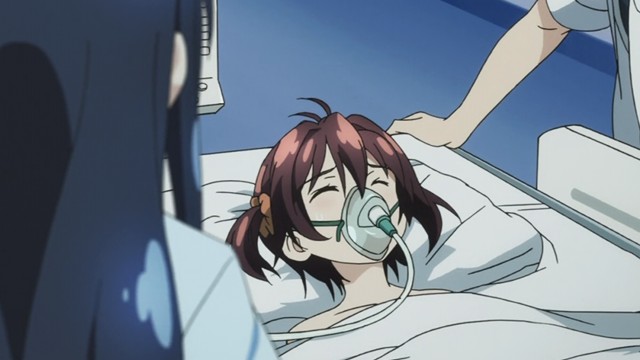 Ladies and gentlemen, the Production Staff went somewhere that even I didn't go, and it's AWESOME.  I saw this scene, of medical staff rolling RHF down a hall while Team Aquos crowded around her broken body and immediately knew I'd seen it somewhere before... I just couldn't figure out where. 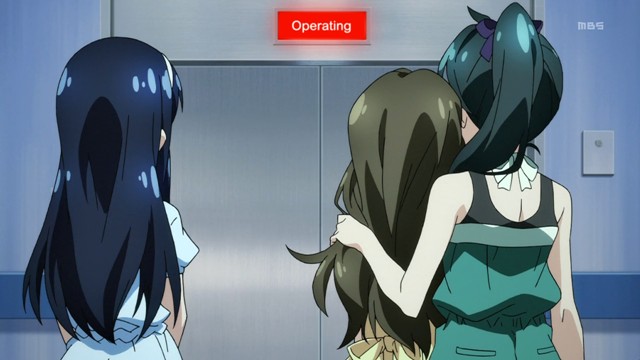 It did eventually come to me, and it may be telling that I was under the influence of a cough medicine that contains a decent amount of codeine when it finally clicked.  We're in Ep09 of Ga-Rei Zero!  The more I think about it, the better VividGaRei OperationZero sounds to me.

Is that what Hot Dark Girl Rei is shooting at the Alones?  Fragments of the Death Stone?  Is RHF going to turn into The Schoolgirl In Black?  When's the pocky eating scene between Rei and Himawari?  Did I really just say that out loud?

Even though it had enough power to blow RHF out of the sky, the Alone was still pretty badly damaged by Team Aquos.  So badly, in fact, that it it needs time to repair itself, and there's only one good place to do that when you're a giant Duncan Butterfly yo-yo: SkyTree! 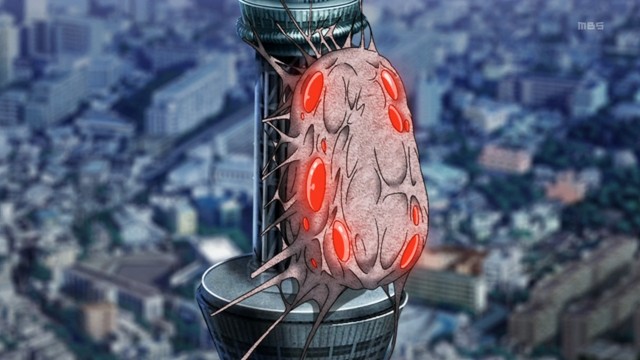 For the record, I coughed up quite a few things that looked like that while the antibiotics were doing their thing on my bronchitis.  I'll betcha it didn't even buy a ticket, durn linejumpin' alien thingie. 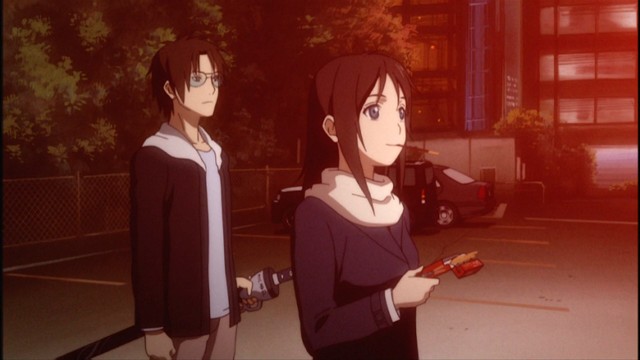 Kagura, aka The Schoolgirl In White, has seen it all before.  Ain't nuthin' new here, just move along.  Turns out the Alone's electromagnetic powers have been turned into a force-field; anything with electronics gets EMP'd before they get particularly close.  Missiles, airplanes, that sort of thing are right out, kinetic weapons only.  As the Powers That Be start constructing trebuchets, it's recognized that tanks shoot kinetic rounds.  A company of tanks is duly summoned and attacks.  It doesn't go well. 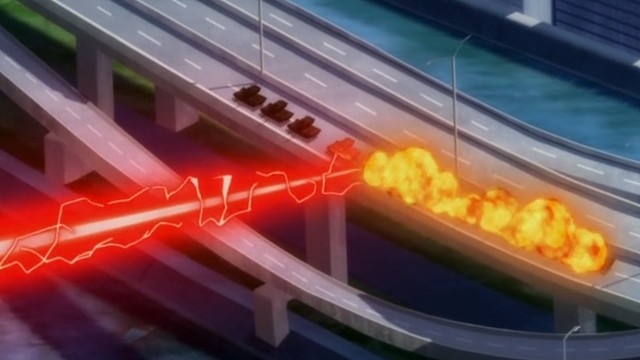 Yeah, while the Alone is hurt, that's only in comparison to its final form.  It's still got the ability to dish out a lot of pain, as the tank company learns.  Really, where's Byukuei when you need it?  The most powerful spirit beast would make short work of this thing.  Back at Command... 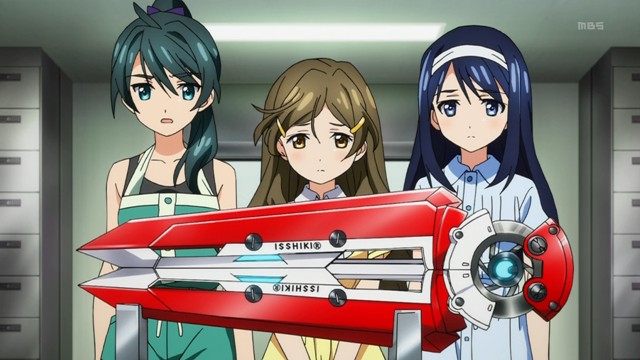 ...the girls get to take a look at "Naked Rang," RHF's weapon.  Oddly, it didn't disappear when the rest of the suit failed.  Everybody is more or less terrified... if it could take down the Red Headed Freak, how can the rest of Team Aquos hope to win?  They're doomed.  Speaking of doomed... 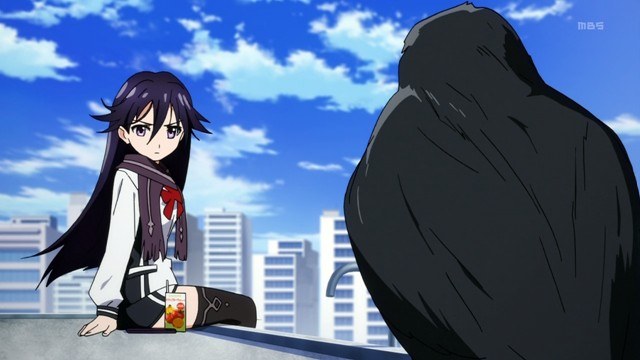 ...Croooow! is giving Hot Dark Girl Rei crap for only taking down one of Team Aquos.  She starts to get angry until she realizes it's not wrong.  With mixed feelings... she kinda does like the Gang of Idiots... she heads off to see what she can do to them.  I'd think her MP-5 would work well.  Meanwhile... 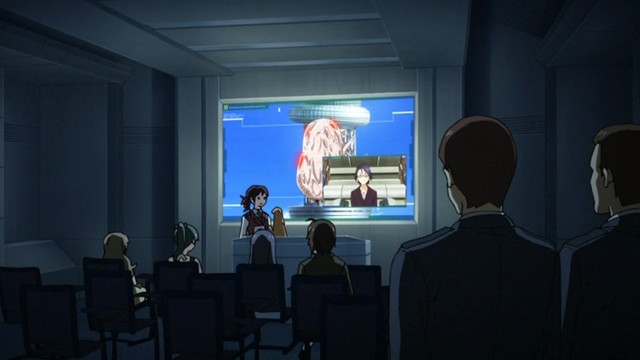 ...the Defense Forces hold a strategy meeting.  The Alone is growing, and will probably "hatch" soon.  Its beam weapon is too much for even the Vivid suits to deal with; even Himawari's shield would only last a few seconds.  As a result, the decision is made not to risk the girls: there's no way for ANYTHING to defeat the Alone without the ability to Dock.  The decision is made to surround the SkyTree with 100 "SGE Bombs" just outside the range of the Alone's energy damper.  Speaking of Evangelion, SGE Bombs may as well be N2 Mines.  Sure, they'll rip the heart of Tokyo out, but there's a 4% chance that the Alone will be destroyed, too.  As you can imagine, the government is less than pleased with this plan, but there's little else to do.  Oh, and by the way, if the Alone destroys the Phlebotinum Engine, there's a good chance that all the energy it contains will be released at once... taking with it most of Japan.  Yeah, use the nukes.  An evacuation order is announced for most of the Kanto Plain. 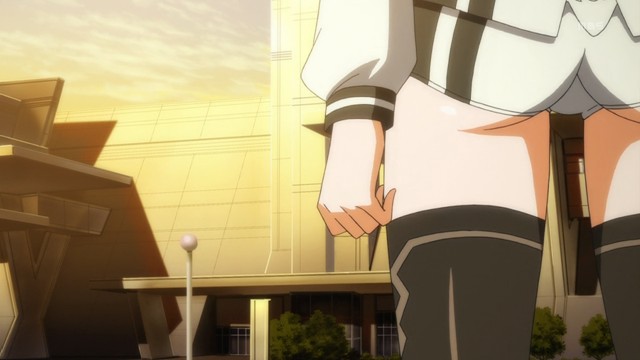 Hot Dark Girl Rei has found the hospital, in case you thought Vividred Operation forgot about its signature camera angle.  She knows "the red one" was brought here, and thus the other three are probably here too... 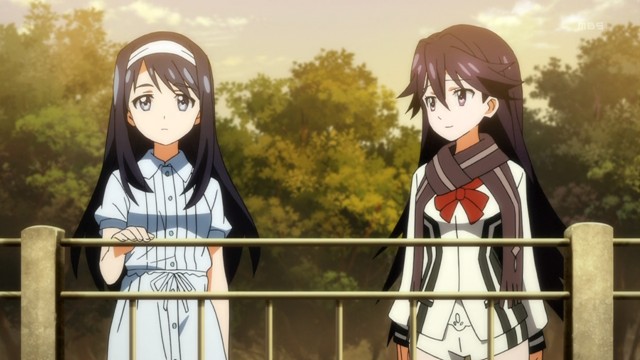 ...when she bumps into Aoi.  She expresses concern about how Rei left in such a hurry the previous day, and how worried Akane was as well.  A conversation then occurs about how supportive the RHF is, and how she'd undoubtedly support Hot Dark Girl Rei's mysterious errand if she knew about it.  If only... but Aoi realizes that she's got to do what Akane would do, and that's take on the Alone with the help of Team Aquos, no matter what the adults say.  The two part, resolved to succeed in their goals.  If only Rei knew how close she was to succeeding just then.  The next morning, the N2 Mines SGE Bombs are loaded into the planes, the sun begins to come up, when... 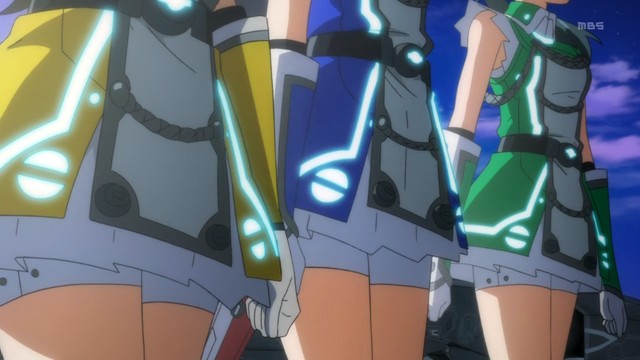 ...look out, we got badasses comin' through.  It's a textbook Big Damn Heroes moment, as they walk out of the rising sun, grim looks on their faces.  It's topped only by the sight of them riding into combat on the back of jet fighters a second later. 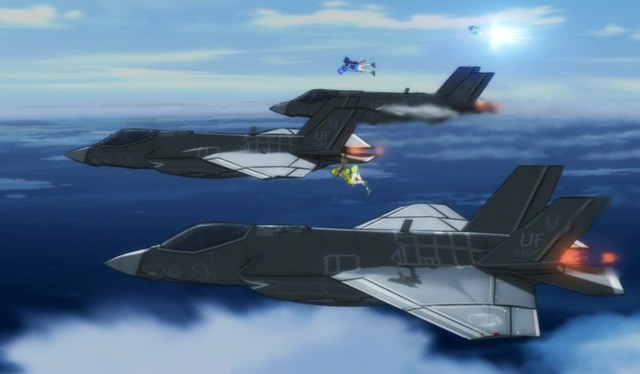 Cue Ride of the Valkyries, which technically is the first time I've used that reference correctly!  I'm so proud of myself right now.  Obviously it doesn't take much; I bought a vacuum cleaner this afternoon, and putting it together made me proud, too.  It had three pieces.  Three pieces.  I'm so lame. 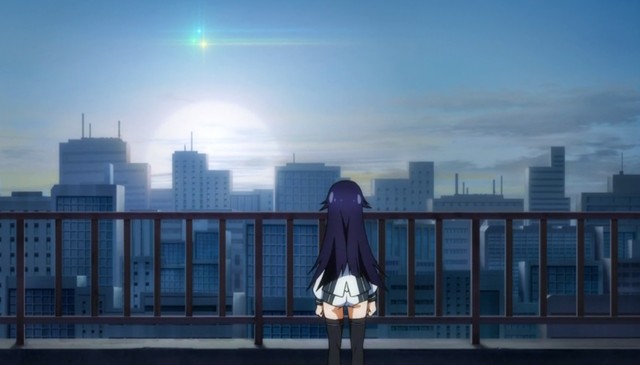 Nearby, Hot Dark Girl Rei sees lights in the sky and knows that her adversaries have arrived... or that she's having another LSD flashback, one of the two.  I'm not sure which is more likely... she does take orders from a talking bird, after all.  Meanwhile... 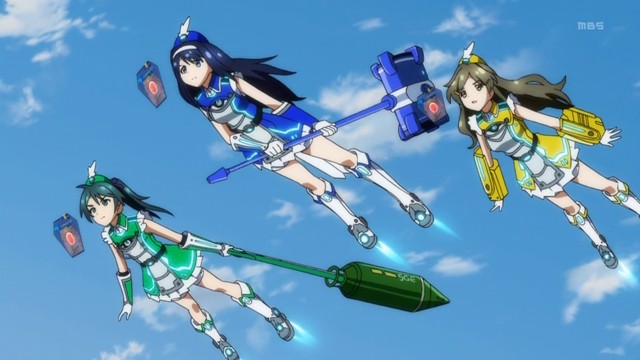 ...the plan for Team Aquos is pretty simple.  Aoi is going to attack the thing I coughed up with her big hammer.  When the phlegm monster starts taking shots at her, thereby opening a small hole in its shield, Himawari is going to jam her shield-thingy into the hole and expand it as big as she can.  Wakaba is then going to stick her sword-SGE Bomb-thingy into Himawari's hole and push it into the soft, squishy creature inside.  Then the bomb will go off, and everybody will go home happy, sweaty, and pleasantly exhausted.  At least, that's the plan.  It will require exquisite timing to pull off, as Himawari's hole will only be open for a few seconds. 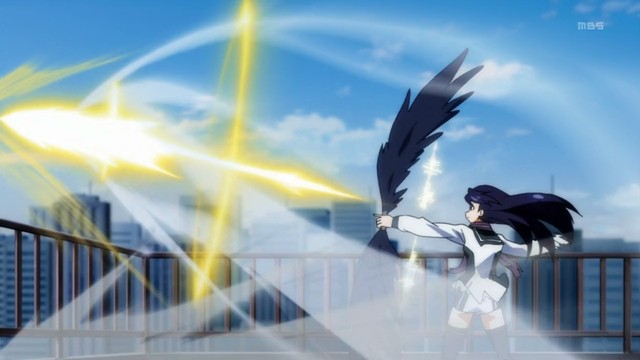 Except Hot Dark Girl Rei doesn't want to play that sort of game.  Even though the Alone hasn't emerged from the phlegmball, she shoots a powerup, despite the disapproval of Croooow!  Quite logically, she points out that if the Alone is destroyed now, it doesn't matter if the powerup isn't as powerful as it could be.  The powerup hits, Aoi bonks the phlegm monster and it starts shooting, Himawari holds the hole open...

...and Wakaba thrusts her weapon into the hole.  Everything seems to be going exactly to plan... 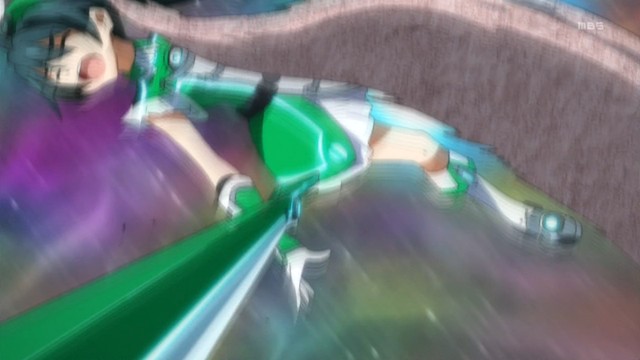 ...and then the tentacles come.  No, I'm not joking.  A tentacle blasts Wakaba upside the head and knocks her flying into the SkyTree.  Himawari's shield-thingy collapses, and she chases after her fallen friend.  This leaves them both INSIDE the shield, which is bad.  Then the shield disappears, which is good!  Then this happens: 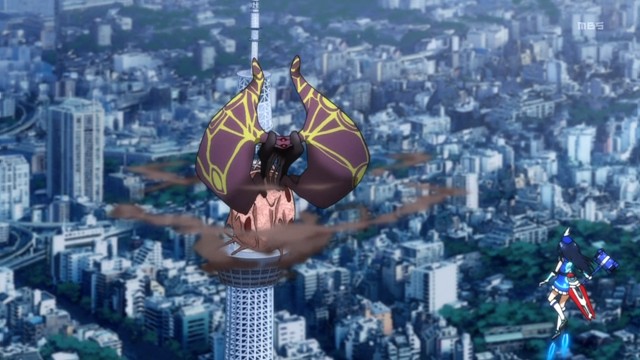 ...which is really bad.  Unless you like Mothra, of course, in which case you get a nice little bonus.  Mothra, on the other hand, really doesn't like pesky middle schoolers jamming explosive lances into its cocoon, and really, who can blame it?  I mean, who DOES like having explosives jammed into them?  Anyway... 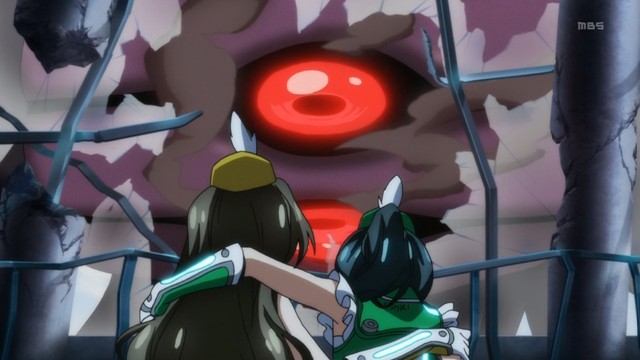 ...it decides to take care of half of Team Aquos before destroying the Phlebotinum Engine.  The eyes begin to glow, imma firin' mah lazors, and soon all we'll have is Red and Blue.  Which is actually a really funny series, which just blew my mind when I realized it was 10 years old.  I remember downloading it via Kazaa, for heaven's sake!  Via dialup!  Aoi tries to fly over to stop it, but she realizes there's no chance she'll make it... 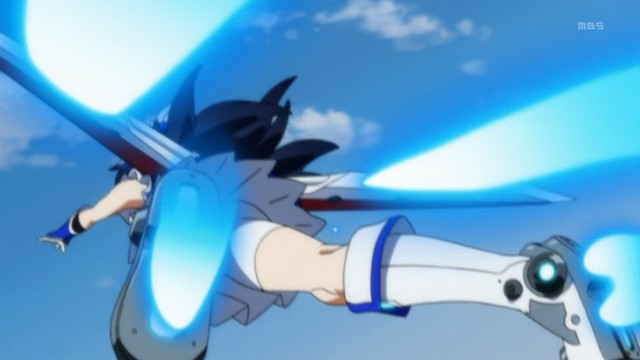 ...and suddenly, Naked Rang snaps open, its jets fire up, and like a push from the RHF herself, she speeds up like she's got a SR-71 stuffed up her... um... shoes.  Voomph!  She avoids the tentacles Mothra throws at her, she zooms up to Wakaba's shaft, hits it with her hammer, and buries the bomb as far in as she can get it.  BOOM! 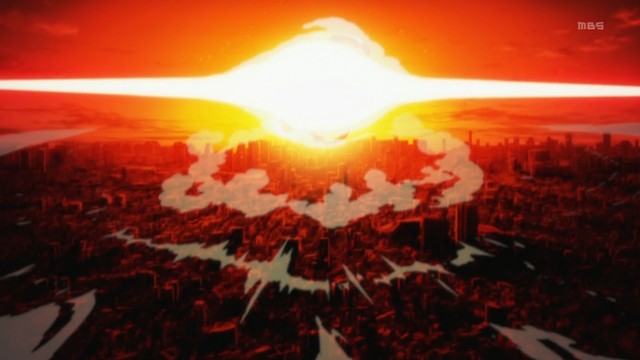 Oh.  I don't think they thought their cunning plan all the way through.  All three of them are killed in the explosion, blown into their component atoms if they're lucky.  If they're NOT lucky, they're just hideously burned and poisoned by the immense amount of radiation they absorb by being next to Ground Zero.  Fortunately for them, their agonies, while immense, lasts not very long.  But I forgot to account for their Vivid Suits, which absorb some of the radiation.  They're still going to die, but they'll still get a chance to say goodbye to RHF. 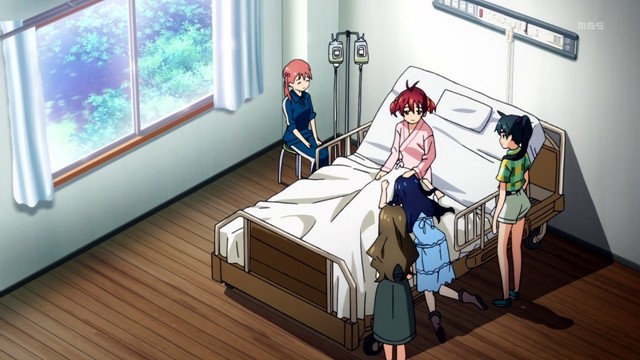 Aoi collapses and dies as she bids adieu.  Himawari and Wakaba last not much longer themselves.  OR... Mothra is destroyed, Team Aquos somehow escapes from The Bomb completely unharmed, and RHF makes a complete recovery.  Everybody is happy!

Almost everybody.  Fade to black, roll credits, the end.

Best episode yet, probably because RHF isn't actively in it.

Next episode: more zombies!  I do wish I could have worked in a few more Ga-Rei Zero references, though...

1 I don't think the new vacuum is going to help with the bronchitis.

You've put a lot of work into this, I feel ashamed.  I really should try to get at least a few shots out of Nyan Koi, but the Speed-review is going pretty quick.  I wanna actually finish something for once.

Oh, and that special camera angle?  I call it perineum-cam.

Use the vacuum to suck gunk out of your lungs!

3 After my wife came from anastesia, they gave her a spirometer and told her to use it every hour. Supposedly it helps prevent pneumonia. Not sure about bronchitis, that one is different (inflamation of upper passageways, not lower ones). Still, maybe something to google out.

4 Ah, I finally figured it out. Pete's word was "anesthesia".