USS Hammann The life of a destroyer is never a glamorous one.  Big enough to be a target but small enough to easily die, the destroyer's main job is to protect bigger, more important, ships from those that would attempt to harm them.

The USS Hammann (DD-412) was the fourth of the Sims-class of destroyers, commissioned in 1939.  2200 tons at full load, her twin screws could push her 348 foot length through the water at 35kts.  She was armed with four 5"/38 guns and eight torpedo tubes, a common enough armament for a pre-war destroyer.  She also carried a few .50cal machineguns.  In comparison to what DDs would carry just a few years later, that seems a light load of weapons, but nobody really knew the threat aircraft posed at the time.

The Hammann was to be blessed (or cursed) with an active, but short, life.  She was assigned to Task Force 17 and served as the plane guard destroyer for the USS Lexington at the Battle of the Coral Sea.  She also collected many of her crew when the time came to evacuate the carrier.

The Hammann backs away, decks crowded with Lexington crew. 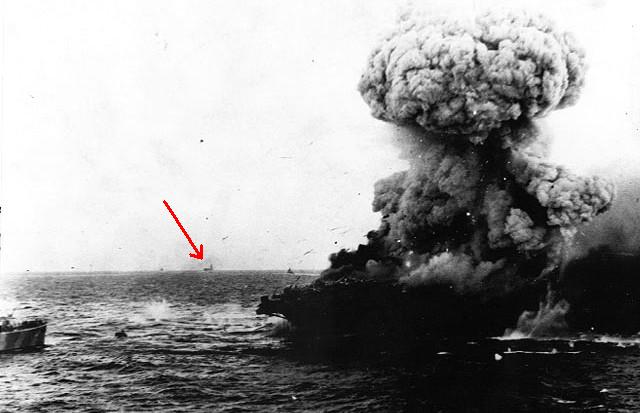 The Lex explodes.  The Hammann's bow is to the left, the arrow points to the USS Yorktown.

After the Coral Sea, the Hammann escorted the damaged USS Yorktown in her dash back to Pearl Harbor.  While the Yorktown underwent a crash repair program, Hammann replenished in preparation for the Battle of Midway.

We all know what happened there.  The hastily repaired Yorktown took three bombs and two torpedoes and ended up dead in the water.  Again the Hammann rescued survivors from an abandoned carrier, this time transferring them to a larger ship.  On June 6th, 1942, the destroyer pulled alongside the Yorktown to provide power, hoses and pumping for firefighting efforts.  While alongside, the Japanese submarine I-168, taking advantage of lousy acoustic conditions, slipped inside the destroyer screen surrounding the crippled carrier and loosed four torpedoes at her.  One missed.  Two went beneath the destroyer, striking the carrier.  And one slammed into the side of the Hammann.  Her back broken, the Hammann jackknifed and sank in four minutes. 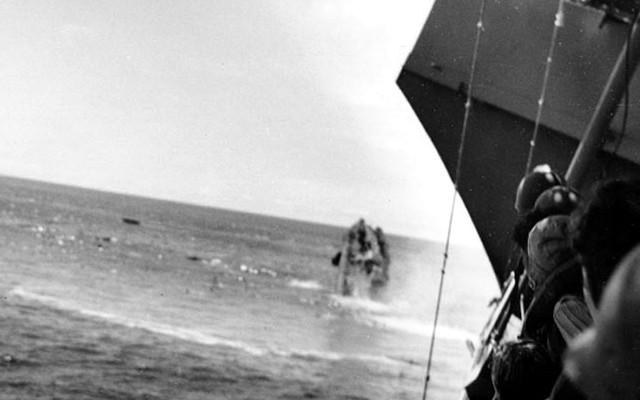 The Hammann's stern portion goes down

Most of her crew ended up in the water, surprised but alive.  The destroyer, however, seemed to have other plans for her men.  Shortly after she went down, a massive underwater explosion occurred when her depth charges detonated.  This is somewhat odd, as the man in charge of them says that they had been safed.  Some have said that her boilers exploded.  Either way, the concussion from the explosion snuffed out the lives of 80 of her 192 crew. 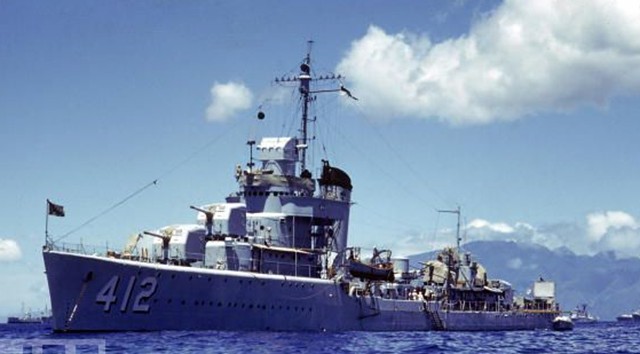 There was nothing particularly special about the USS Hammann.  Just another destroyer in a fleet that had dozens... hundreds... of them.  But circumstances put her alongside the first two American carriers lost during WWII, and nothing but horrible luck made her the first American loss at the Battle of Midway.  She earned two battle stars for her service, and her captain, Commander Arnold True, was awarded the Navy Cross for his work at Midway.

As can be said about many of her counterparts: "A great ship."

Raise a glass for her.