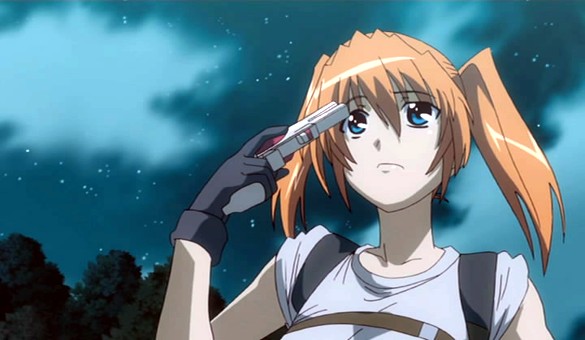 Considering what happens later in the episode (Nanoha befriends the hell out of her), this might have been Tea's best option.

1 Hey, at least she has her finger outside the trigger guard. Most fictional characters have terrible trigger discipline.

2 Well, Cross Mirage doesn't actually have a trigger guard, but your point is still made, and taken.

3 Keep in mind that Cross Mirage doesn't need a trigger -pull- to fire. We don't know how literal-minded those devices are... presumably if Subaru had chosen that moment to ask Tea, "Hey, what's your most powerful attack spell?", CM wouldn't actually blow Tea's brains out. On the other hand, it might whack her upside the head to teach her fire discipline...

We know friendly fire's possible because of Vice. (But it's also largely survivable, same incident.)