Two Thousand Million Or So Years Ago... 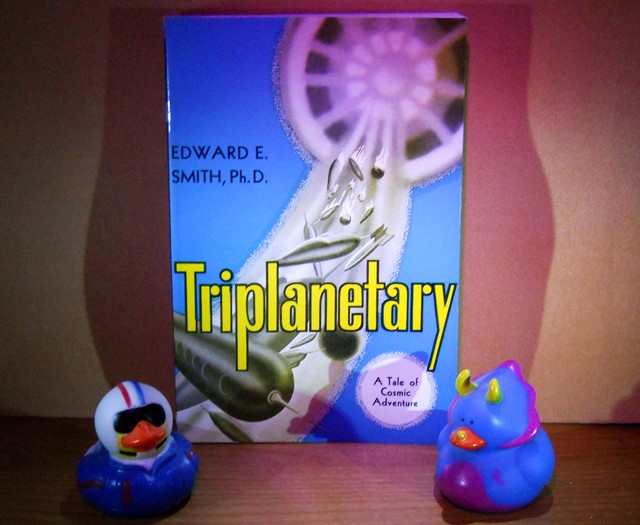 A few years back, I felt the need to go to the roots of space-opera science fiction.  As I'd never read any of EE "Doc" Smith's work, and Robert Heinlein himself spoke well of the man's work (and told a wonderful story of how Smith tested a used car before Heinlein purchased it), I figured it was a slam dunk that I'd love it.

I was wrong.  I had never been more disappointed in a book since I found Farnham's Freehold in a used bookstore for a dime... and later felt ripped off.  Look, I'll admit that I was young and stupid when I read Triplanetary some eight years ago, but I felt the plot of the book was hackneyed and ridiculously over-used.

Of course it has, but that's not the author's fault.  Considering that Doc Smith for all intents and purposes invented the space-opera genre of science fiction, of course the book is hackneyed now... hundreds upon thousands of books and movies owe Smith their very existence.  But I didn't read the book when they were originally published (in pulp serial form), I read it in the 21st Century... and found it boring.  Dull.  Poorly written.  Uninteresting.

Shortly after I finished Triplanetary, my brain made the connection: the book was dull and cliched because it was the FIRST to do all the things that make space-opera space-opera.  Grand battle fleets tearing themselves apart with ray guns?  Hyperspace?  Shields?  All of that and more can be found in Smith's books...

...and I can't read them as novels.  Historical documents, yes, but not novels.  My brain, steeped in science fiction for 30 years (I started reading SF around the age of 10), just can't make the jump to read them in-period.  I might be missing out on a lot, but I can't do it.  They're just so...

I appreciate the chivalry that Steven speaks about in the post that generated this one.  I still hold doors open m'self, and so forth.  But Triplanetary does take it to an extreme... not even a darned chaste kiss to be seen, which seems unrealistic even for the 1930s.

There's one other thing missing from the book that really kills it for me, and that's a sense of humor.  It's so bad that Triplanetary can't come near books that have funny bits without killing them altogether... I placed it next to James Lileks' Mommy Knows Worst and haven't laughed at it since.  It's not that the jokes fall flat in Triplanetary, it's that there's no humor in the book anywhere.  I'm sorry, but that's a deal-breaker for me.  If a book or series is so darn serious that it can't laugh at itself even a little bit, I can't stand it.

So there you are.  I tried, I really did... but for this duck, the Doc is definitely out.

Unfortunately, Triplanetary isn't the book to start with. It was written later, kind of as a prequel, and frankly it's far from being my favorite of the series.

I found First Lensman, the second book of the series, to be tedious, partly because Virgil Samms, the protagonist, is a stuffed shirt.

The real story of the series is about Kimball Kinnison, and that begins in Galactic Patrol and runs through Gray Lensman, Second Stage Lensman, and Children of the Lens.

And there's a seventh book in the canon called The Vortex Blaster (later renamed to Masters of the Vortex) which is about an entirely different character. That one's actually my favorite.

2 I started with Galactic Patrol, which is the book he wrote first. It is much better than Triplanetary.

3 I don't think I read any Doc Smith when I was a wee lad who'd just received permission to raid the grownup shelves in the local library, but I gleefully devoured all the dusty pulp SF they had, much of which would make Triplanetary look like A Fire Upon The Deep.

Seriously, I just found the Kindle edition of one of those ancient novels, Manly Banister's The Scarlet Saint. I can't describe how much worse it is than the magical adventure my 9-year-old self experienced.

As the saying goes, "What was the Golden Age of Science Fiction? Twelve." :-)

4 Have to agree with you, Wonderduck.  While there is better "Doc" Smith and worse "Doc" Smith, coming to his works after reading years of later space opera is kind of a hollow experience.

5 The man started his sf career in the Edwardian era, and didn't feel he handled romance plots well. But if you read the later books, there's plenty of action going on in the background, no worries.

But first off, you should never read any of the introductions on your first read-through. They are the fix-up connecting the Lensman version of the older, non-series novels (like Triplanetary, which bears many traces of its original 1934 form) with the Lensman novels. Once you've read the stories already (as the magazine readers would have, which was why they were ever published as books at all), the intros are fun. Before that, they are spoilers.

Second, you should start the series where it really starts, with Galactic Patrol (1937-193

. Don't read the intro. The series starts with that scene in the Academy describing the seniors getting ready for graduation.

My understanding is that the intros started showing up in the magazine version of Gray Lensman (the second novel, 1939-1940), but my single copy of a magazine version has a very funny intro with the author explaining about his interview with Kinnison. I don't think these have ever been reprinted, which takes a lot of flavor out of the later intros that Smith put in for book publication. Anyway, keep reading with Second Stage Lensman and Children of the Lens, and then cut back to read the others if you wish.

I grew up reading space opera, but I found the Lensman series still very fresh and fun and fast-paced. I hope you will try it again.There are some pretty good audiobooks available from Books in Motion or through Audible, albeit it's hard to skip intros and forewords with an audiobook.

7 Edwardian as in the first publication of The Skylark of Space.