Top Gear Gets A Visitor Casual fans of the BBC TV show Top Gear are familiar with the segment "Star in a Reasonably Priced Car," where some celebrity shows up and takes an inexpensive vehicle around Top Gear's own racetrack.  The top star currently is musical artist Jay Kay, lead singer of the group Jamiroquai, with a 1:45.8 in the Chevrolet Lacetti, known as the Suzuki Forenza here in the States (for the record, the fastest lap around the track was put in by a RN Sea Harrier, :31.2; the fastest car was Renault's 2004 F1 car, the R24, with a :59.0, driven by The Stig).

What those who aren't particularly familiar with the show don't know is that, occasionally, they manage to score real racers for a lap around the track, known as "F1 Stars in a Reasonably Priced Car."  Such luminaries as Jenson Button, Lewis Hamilton, Nigel Mansell, Mark Webber and Damon Hill have turned laps, with all coming behind The Stig's 1:44.4. 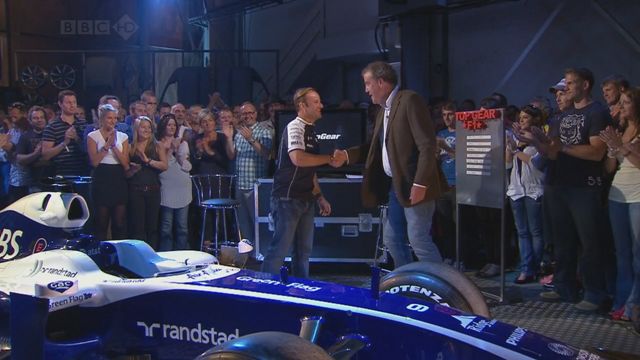 It's remarkable how not tall Barrichello is, particularly standing next to 6'5" Jeremy Clarkson.  He's very small.  I knew that F1 drivers are usually short, but it's still a shock every time one sees that fact.  Anyway, in his day job, he drives a F1 racer, capable of 205mph on the right track, with enough grip to pull 5Gs in the turns or under braking.  But what is he driving for this lap? 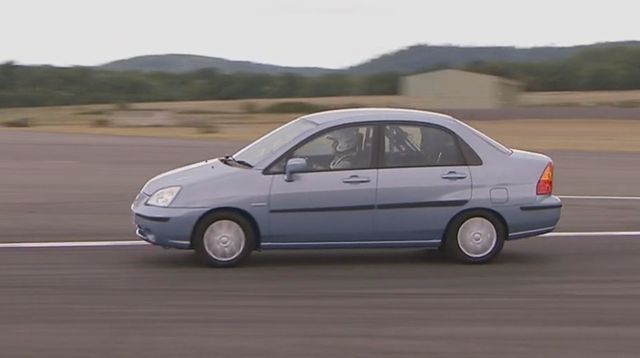 A Suzuki Liana, the same as every other F1 driver.  Rubens' reaction? 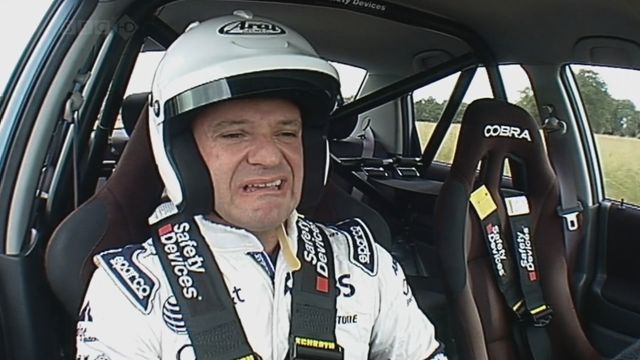 He drove the same line that The Stig takes around the track, unlike just about every other F1 driver, who tend to go a lot wider through the turns to keep their speed up.

And what was the result? 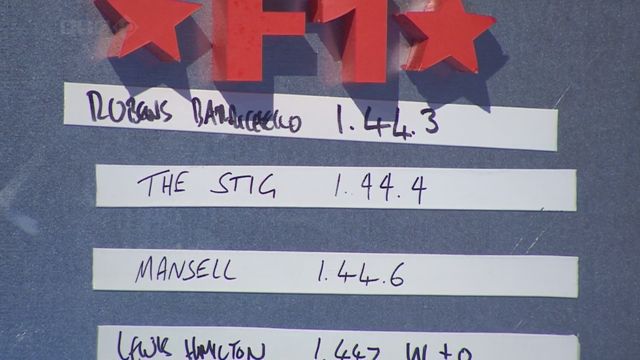 A 1:44.3, the fastest F1 driver ever, beating even The Stig itself!  For the record, the F1 leaderboard is as follows:

1 That's pretty amazing for the king of whiners.

2 If I had to drive a Suzuki Tincan Liana, I'd be making that "yuck!" face, too.

How did Schumi get the DNF?  Part of me hopes he made a fool of himself by stuffing the car off the circuit.  OTOH, let's hear it for Mansell--almost two decades past his racing prime, and he can still run with the big dogs.

3 Slappy's run was a joke lap.  He stalled on the line, bunnyhopped once he got the engine running again, spun a couple of times, then got lost and wound up heading towards France.  It was funny, but it was pretty clear that it was done for laughs.

Mansell did his run in 2005, so it wasn't exactly recently but still... whoa.

4 That Italian who took his wife for a ride? They ought to get him on this show.

5 TG almost makes the license fee worth paying, just wish the beeb would give them a decent budget again so they can do more big trips and projects like the amphibious cars.