Tooth Is Out, All Is Swell(ing) 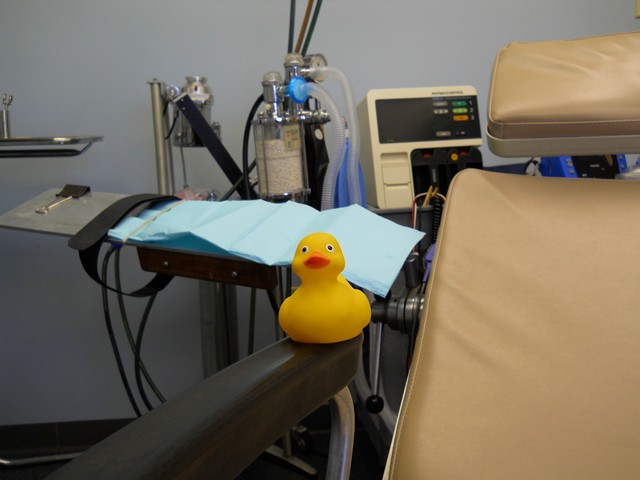 I'm currently at the Old Home Pond, totally clear-headed as they didn't put me under general anesthetic to yank the offending tooth.  Instead, they used Nitrous Oxide gas.  It worked, I didn't particularly care what was going on while they dug around, but whoo-doggie I do not think I like Nitrous all that much.  It was unpleasantly like being drunk... and if you don't think that's an unpleasant feeling, ask a glass of water.*

So, yeah, I'm drooling and bleeding all over the place but for now, all is well.  So far.  I think.

*Joke blatantly stolen from one of them-there Douglas Adams novels.

Glad to hear that you're OK.

I think Nitrous Oxide is considered a "general anesthetic". It depends a lot on how much they use, but it's possible for them to put you out like a light with it.

I'm curious: did they also use a local?

2 Oh yes, yes they used a local.  Two shots, one on the outside of the gums, one on the inside, after the whole gumline was hit with a spread-on topical.  To be honest, the stick on the outside was the most painful part of the whole thing.  The pain followed a distinct path from the upper-left bicuspid to the outside point of my left eye, then straight up to my hairline.  Dr A apologized, saying that he "must have hit the nerve."  My response, rendered nearly unintelligible by the bite-block holding my jaws open, still managed to burn off the wallpaper opposite me.

3 Nitrous oxide is the most wonderful thing to have when you're getting dental work done.  It makes you not care about anything.  The dentist could use Semtex to blast the tooth out and you'd be too busy admiring the way the wallpaper (the unburned part) seems to move even to care about it.

Glad the yanking went okay.  Follow his post-procedure advice; believe me you don't want to get the condition known as "dry socket".  That sucks almost as bad as having the tooth still there....

4 I'm glad to hear that you're feeling better, but I must admit to being a bit confused.  You said that you went to a dentist, but since when do ducks have teeth?

5 I've never had the 'pleasure' of Nitrous, but it's been ages since I had to endure that kind of work in the dentist chair, after one unpleasant experience with a root canal some years ago I've been very very good about brushing, flossing, etc.  And most of my teeth that are hard to get to are now ceramic anyways...

A minor hijack: I spent this weekend in Monterey for the Rolex Historic Motorsports Reunion.  One of the race groups was 1966-1983 Formula One cars.  I took a video of the group making it's first hot pass through the corkscrew which you can see here: http://www.youtube.com/watch?v=10vF_-e20mE  Hope that helps you feel better!

I have literally thousands of pictures and other videos of the event which I'd be happy to share with you, let me know.

6 Ever been bitten by a duck, Siergen?  No?  Then don't assume there are no teeth.

David, I'm a firm believer that the Historic Motorsports events are populated by lunatics... imagine taking a 40year old car out and racing it against other 40 year old cars!  Then say that there are only five of your type of car EVER MADE.

Yeah, I'd be nervous.

7 OMGosh! I take a duck to my dentist (and doctor) also because I am a big baby when it comes to that stuff. My dentist actually has a couple of rubber ducks in his office. He told me if I ever forget mine he would let me use one of his. Heehee. Hope you are feeling better