To The Mun IIIa: The Search For Something That Flies After the failure of Mun Rescuer I, it was time to go back to the design phase to come up with something less likely to turn itself into a brightly glowing ball of incandescent gas.  An hour or so of tinkering brought forth the cleverly named Mun Rescuer II: This Time It's Personal. 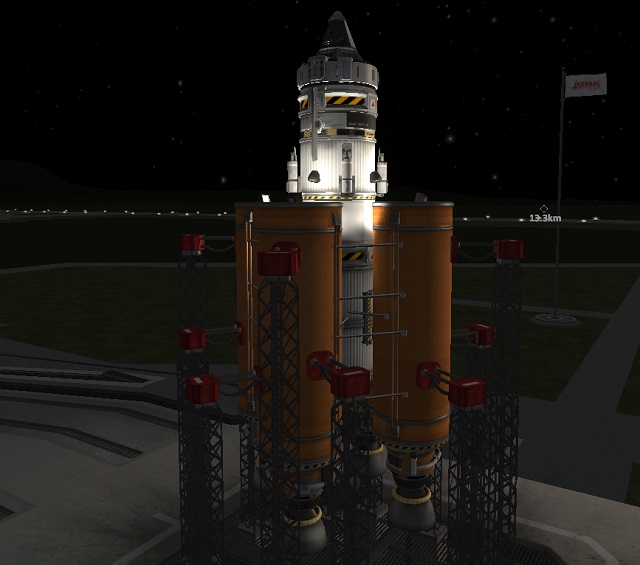 This time with more lights!  No, they do nothing for purposes of getting to the Mun, but it does make it look purty-ish!  The media beast must be fed, don'tchaknow?  It heads into space on the immense power of four Mainsail liquid fueled engines. 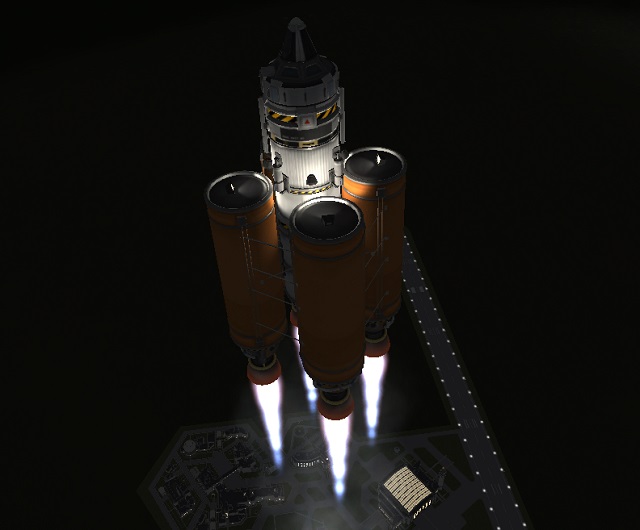 See?  It leaps off the pad with the greatest of ease, and practically wants to scream into space at a speed guaranteed to rend it into component atoms before the gravity turn.  It wasn't until Mun Rescuer II: This Time It's Personal dropped the Orange Cans of Fuel that I realized that there was a problem.  Namely, this beast was horrendously underpowered to go to the Mun.  The stage that I had intended to use for Translunar Injection was swallowed just getting into a stable orbit.

Worse still, the lander-and-go-home stage clearly didn't have enough gas get to the Mun on it's own.  Chalking it down as a good test flight, I deorbited, hoping the PPD-12 Cupola could handle the re-entry stress.  Really, the whole endeavor would come down to that... it's pointless if we pick up Bill Kerbin from the Mun, only to fricassee him a few kilometers from home. 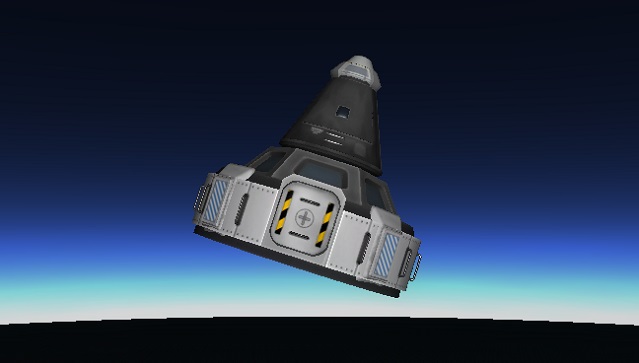 Much to my surprise, it didn't turn into something resembling a melted marshmallow... the Cupola really isn't meant for that sort of thing.  Even better, the capsule didn't pull apart from the lifeboat when the parachutes opened up.  Huzzah!  Feh.

So!  A spectacularly frustrating first flight.  Everything worked perfectly... except for the whole reason this thing exists: getting to the Mun and back.  That part?  Not so much.  But at least Bill Kerman is having fun on the Mun. 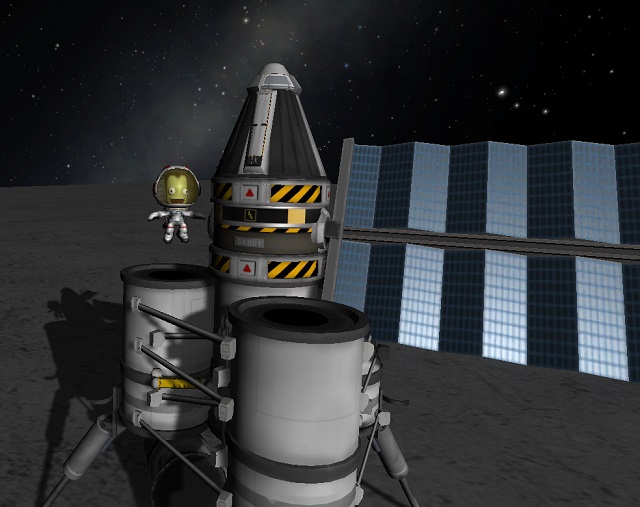 Morale is still high, despite all reason.

1 I've been trying to get to Duna and back for the last several days.  I actually had Jeb stranded on Duna at one point, he landed in one piece but the lander fell over.  I should have left well enough alone and mounted a rescue attempt, but I wanted to experiment a bit so I tried rolling the lander a bit with the torque module and then launching when it was pointed vaguely upwards.  I kind of expected it to go blooey on me so I did a quicksave first.  Sure enough the launch didn't work, only I hadn't actually done a quicksave, and when it reloaded I was about 2 years earlier in my career at my first Minmus landing.  Oopsie!
I've since been trying to repeat the Duna mission, but I have less in the way of parts available and can't make that same rocket.  I'm actually in orbit over Duna waiting for my window back to Kerbin right now, waiting to see if I've got the juice to get home or not.

2 That's very cool, I didn't know you could do lights.

3 The lights are very nice.  I forgot to put lights on my first lander, and while it was OK for my first landing, for my second landing I really wanted to land in a specific spot where it was dark, and that didn't work out so well.  Hitting a mountain side at ~40m/sec hurts.  I also had one time where I spent about 10 minutes trying to get my Kerbal back into the capsule in the dark before realizing I was trying to climb up the wrong side of the lander.

4 I've been looking at your Mun Rescuer II design up there, and I'd be astonished if it got much past orbit.  I only just got access to the orange tanks and mainsails in my career game, but I recall that while they do surprisingly well, they don't do *that* well.
The launcher stages I've been building have been several times larger than that, but I've been trying to move very heavy landers with all the science instruments and the power to bring them back.  I don't know how much that lander can weighs in comparison, but I bet that rescue lander is quite a bit heaver than the original one, and for every pound you add at the top, you're going to many many times more in the launch stage.

5 David, while I understand that you're farther along in the game than I am, part of this series is me learning by my mistakes.  I'm trying to figure out what I'm doing as I'm doing it, and making it enjoyable for the readers in the process.

6 OK, I was just trying to be helpful and keep some comments active, but I can pick other kinds of things to say.  I am trying to enhance the fun, not ruin it.
I've hit an interesting wall in my own career, I've finally pulled off the Duna mission I've been working on for a week, and now I have no idea what to do next.  I think I want to build a space station or munbase, but I haven't researched most of the necessary parts.  I'll probably end up duplicating my Mun, Minmus, and Duna missions, but this time with a three Kerbal crew.  I hate to think how big the rockets will get if I'm trying to do that without multiple launches and orbital rendezvous.