To The Mun! II: Electric Munaloo! After hours upon hours of poorly thought out mission parameters, unsuccessful orbital routines and rapid unplanned disassemblies... 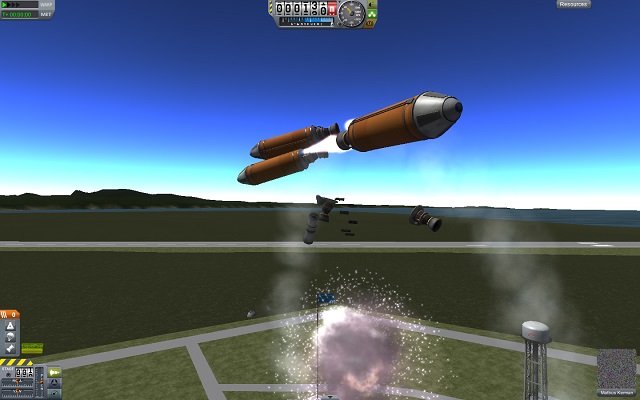 ...I have finally figured out how to to routinely make it into orbit.  As Robert Heinlein pointed out, "once you're in orbit, you're halfway to anywhere."  So, like any good Kerbalnaut, I set my sights on My First Mun Landing®.  How hard could it be? 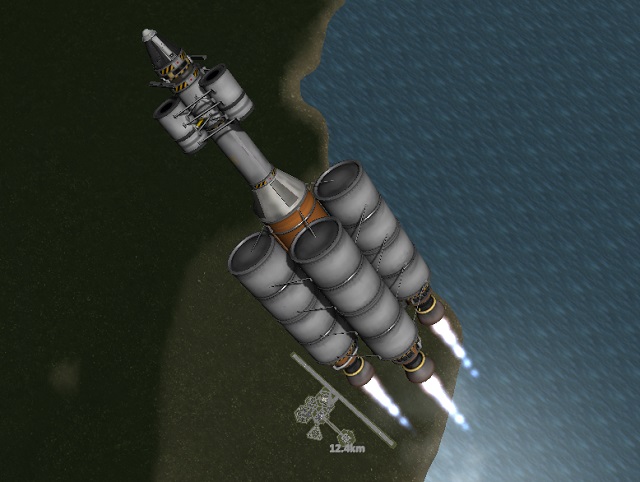 Here is the trusty steed, the cleverly named "Mun Launcher I", in the middle of the gravity turn for orbit, a short time before dropping the heavy boosters.  Players of the game might recognize that I'm actually heading towards a retrograde orbit... what can I say?  I'm an iconoclast!  I've also had four consecutive successful Munar orbit launches this way, and zero successful Munar orbit launches going the normal way.  It's probably just me. 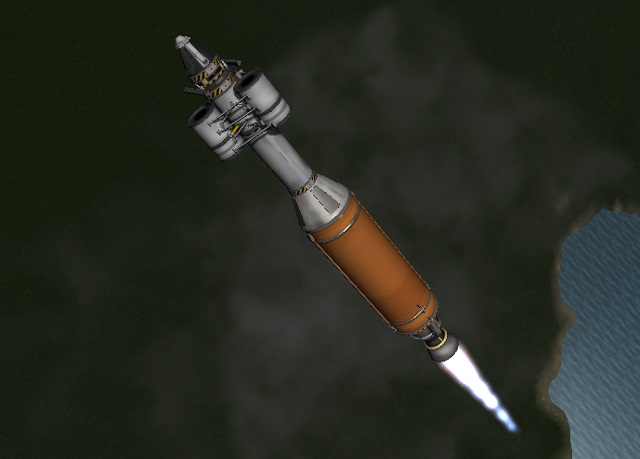 Here we've dumped the "GetMeUpHigh" parts and are now running on the "GetMeToOrbit" section.  It's about as maneuverable as it looks, too... darn thing doesn't so much "turn" as it does "wallow."  By the time the orange tank is empty, however, we're either in orbit, or an elliptical path that just barely misses being an orbit.  Either is acceptable, as this puppy is going to the Mun! 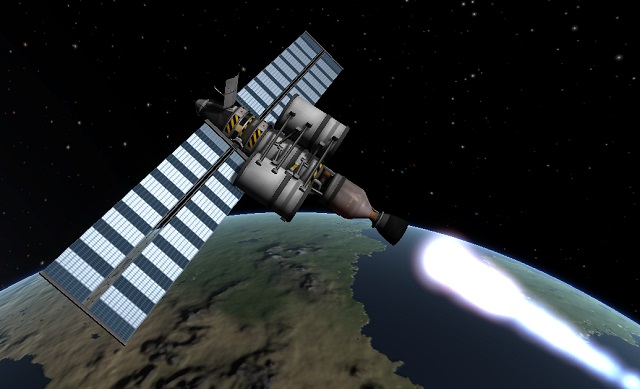 Munar stage!  Sharp-eyed readers might notice a lack of landing gear... that's because these shots are from an early orbital test.  The Gigantor XL solar arrays are waaaay overkill for the mission, but this is KSP.  If it's worth doing, it's worth overdoing.  I'm using the nuclear rocket, as it's the most fuel efficient in the game, and lord knows I'm not THAT good yet... any spare fuel is a good thing!  In due course, the trip through the inky black is complete, and orbit around the Mun is accomplished.  All that's left is to land.

...and here we go.  Sharp eyed readers will have noticed that I've added landing struts to the Munar Stage to turn it into a Munar Lander.  Experienced KSP players probably know what the problem with these struts crossed with the nuclear rocket are, but I went through all the calculations... and did it anyway. 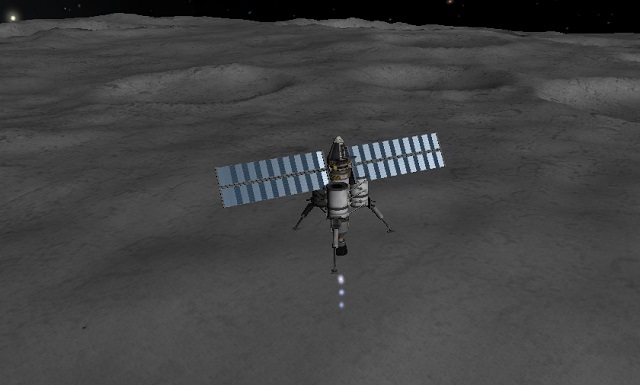 Almost there!  The original landing point was going to be right on the lip of one of those craters... bad, bad idea.  I managed to drift over a bit to prevent that from happening and found myself heading for a pretty flat location instead.  Nice!  The surface came up slowly, I was juggling the throttle by mere percentage points either up or down every second, I realized I was holding my breath, until... *KLONK* 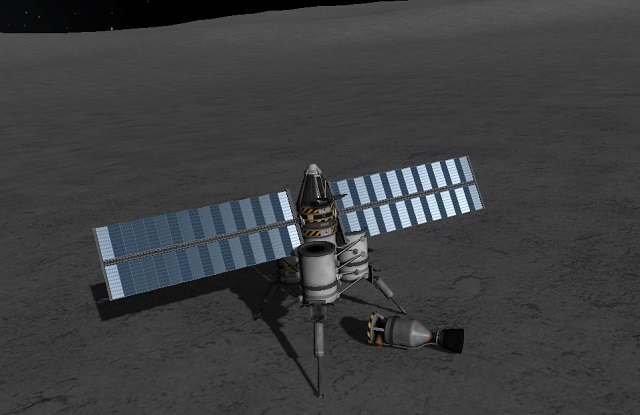 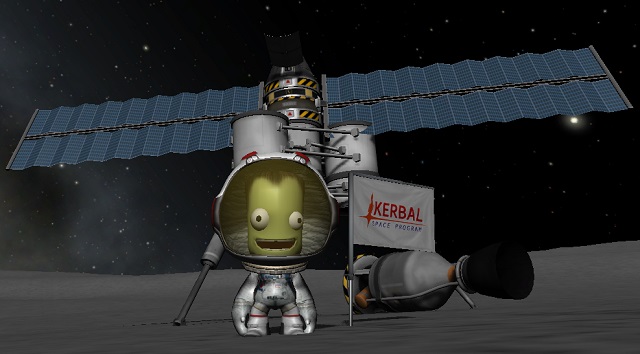 If this isn't the quintessential Kerbal Space Program picture, I don't know what is.  Success and failure, all in one shot.  Bill Kerman, we salute you!  We honor you!  And now, we have to rescue you.  But that's for another day!

1 For my birthday (the 31st) I went legit and bought the full version.  So many parts! I found the Wiki, which is very helpful so far (I didn't know how to set up the staging).

I once made Munar orbit with the demo, 7 stage rocket, I think I even made it home.

Learning to make good use of those Maneuver markers is next on the agenda. It would probably ruin the game if they made them autopilot points.

I do wish there were a little more on-screen documentation/Controls, instead of bringing back the days of needing a keyboard cheat sheet for each stage of the game.

3 Nicely done with the Mun landing, by the way.

4 Oh, and speaking of a Keyboard cheat sheet...

5 Bill Kerman, we salute you!  We honor you!  And now, we have to rescue you.  But that's for another day!

He seems awfully happy for someone who's stranded on the Mun. How much time do you have for a rescue before he runs out of oxygen?

6 As long as it takes, basically.  They're pretty hardy little critters.

7 Hooray for a successful Mun shot!

8 Nicely done!  A Mun landing in true Kerbal style.
After your original post got me back into the game, I've been running in career mode.  It's a LOT harder to get to the Mun when you have a limited set of parts, but it's also a great learning process.  The rocket that got me to the Mun and back was quite a bit bigger and more complex than yours, but I didn't have the big fuel tanks, fuel cross-feed, or nuclear engines available.  It turns out that Minmus is actually an easier target, that same rocket and lander did that as well for their next mission, and was able to do a few orbits of the Mun on it's way back for more research.
My latest goal was to get a probe out to Duna.  I finally managed it last night after redesigning my rocket about 5 times.  The rocket that finally did it was scarily huge, and even so I wasn't lifting a return vehicle, my lander didn't have the juice to get back to Duna orbit from the surface.

9 My Mun lander had a central "400" tank with a pair of "200" tanks on the side with the 909 engines on them, fuel feed from the center tank to the exterior ones.  Put on four of the very simplest small solar panels, radial parachutes on top of the side tanks and the pod, an extra battery or two, and an SAS on the central tank just above the decoupler, and you've got a lander that can easily handle itself from Munar injection through several Munar landings and a return to Kerbin.
You've gone way overboard on the struts, especially if you've got all the parts available and are using medium or heavy connectors.  For tanks below 800, I connect them to the central body with one light strut at top and bottom, and connect them to their neighbor likewise with one strut at top and bottom, and that's plenty strong enough to hold things together without any flex.  For the big 3200 tanks, a similar pattern of medium connectors is good enough.  If your lander or transfer stage get big enough, you might tie them to the lower stages with struts out to the boosters to keep things from flexing.
I don't see much in the way of control on that ship.  For something that size, I'd have winglets on the external tanks, and a large SAS at the top of the central tank, backed up with RCS rockets if I'm going further than the Mun and need precise trajectory control.  RCS is also good for landers, as in a pinch it's extra thrust if you run the main tanks dry.

10 If that's a nuclear rocket, I think your astronaut has a more immediate problem to worry about than running out of air.  A NERVA type booster becomes intensely radioactive during use, and he's standing a couple of feet from the business end of the thing....

11 David sez: You've gone way overboard on the struts, especially if you've got all the parts available and are using medium or heavy connectors.

David sez more: I don't see much in the way of control on that ship.

Don't need much.  There's an Inline Advanced Stabilizer up there under the Decoupler attached to the Mk1 capsule.  Further, there's only need for one maneuver for this puppy: the gravity turn.  If the "GetMeUpHigh" stage needs to do anything more than that, well, "You are not going to space today."  The rest of it is handled quite nicely by the IAS... in real life, I suspect the rotations/second this thing can do would kill a person.

12 Ed sez: If that's a nuclear rocket, I think your astronaut has a more immediate problem to worry about.

14 Yeah, the aerodynamic drag model of KSP leaves much to be desired.  It used to be that each part had a drag factor, but it basically just boiled down to more parts and more mass = more drag, so adding aerodynamic nose cones and payload shrouds was actually a bad thing.  I heard that they patched it a bit in the latest version, but I need to verify that.

15 I've been inspired by the Wonderduck, and have decided to blog my own KSP adventure.
These are the stories of the Royal Squirrel Patrol Space Force.

16 Steven, those "barrel things" are the fuel tanks for the Munar Stage.  And yes, in real life, they'd be as aerodynamic as a cement truck.  But, as David points out, there isn't really a drag model in KSP... yet.  Near as I can tell, every piece of equipment, from a narrow strut to a sideways mounted Orange Can Of Fuel, has the same drag.

Every fiber of my being wanted to put a nosecone on them, believe me.