To The Mun! FINALLY! 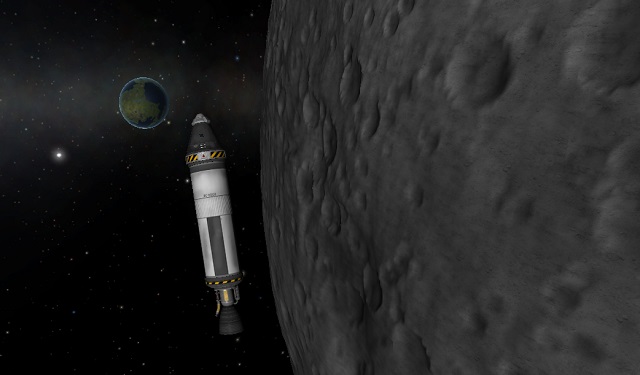 Sure, maybe everybody else has already managed to get into orbit around Mün, or landed there for that matter, but I never pulled it off.  Until tonight, courtesy of my Delta-K rocket, some seat-of-the-spacesuit piloting, and a metric fsckton of luck.  Even better, I think I'll have enough go-juice to get Jebediah back, to boot!

The next step?  Land on the darned thing, and get back.  I think the Delta-K will have the oomph to get the lander up... I hope.  I have high hopes.

1 The best I've managed so far was to orbit the Mun, and run out of fuel on the way back, ending up in an orbit with a periapsis of around 150 meters, and an apoapsis that was about halfway back to the Mun.  I've actually got that game saved aside as mounting a rescue would be an interesting challenge.
That rocket probably had enough delta-v to get back, but I messed up my maneuvers, breaking Mun orbit in a way that added total velocity to my orbit which I then had to cancel, and I tried to rush that, rather than wait for the most efficient time.
Compared to your Delta-K, my rocket had more in the lower stages, but less in the middle.  I had five of the big fuel tanks with fuel cross-feed, so I drop two fairly quickly, drop another two just before achieving orbit, and use the fifth to put me on the mun transfer orbit.  Then the upper stage handled mun orbit and return.  My upper stage was smaller than yours.  The rocket's I've seen with landers on them have more upper stage than you do, with lower stages in line with what I had or larger.

2 Ah, I've cracked up quite a few Mun landings.

Nothing like that moment when you realize 'Oh crap, I'm coming in waaaay too hot!'...

Here's a screenshot of one of my less than successful landings (though with repeated rocket pack smackings, I did get the habitation module upright).

3 I'm still orbitally challenged.  I can get a rocket up there safely, but my orbits continually end up being elongated and outside the second moon's orbit for the apoapsis (I'm mangling the word, I know it)

4 As it turns out, Jeb did have enough go-juice to get back home... if CapCom had any idea what they were doing.  Instead, Jeb wound up in a lovely solar orbit, tilted about 15° in relation to Kerbin's orbit.

After watching something around 20 full orbits, the closest Jeb ever got to Home was roughly halfway between Kerbin and Mun.  Rescue... is probably not an option.

I've been playing around in the free demo for a while, and the tutorial they added helped me immensely. That and some youtube videos finally got me sorted out and making regular Munar trips.