This Is Simple! So you wanna be a F1 driver, bunky?  You think you got the skills to take one of the 22 most technical cars in the world out onto the racetrack and go head-to-head with the likes of Seb Vettel, Mark Webber, HWMNBN, Shiv Hamilton and all the others?  Okay!  Here's your steering wheel. 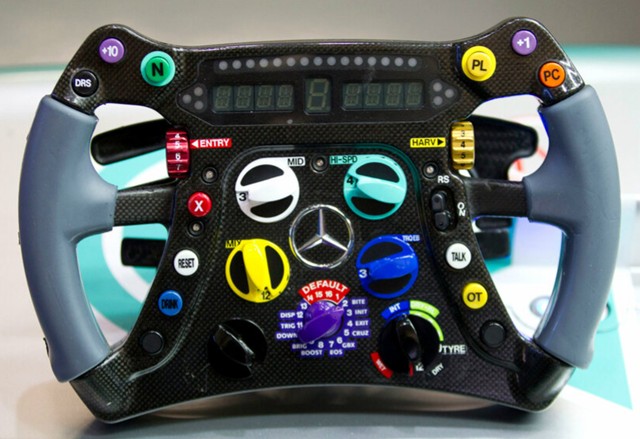 ...and here Hamilton thought he had gotten away from Button(s).

Hey, where you going?  I thought you wanted to be a F1 driver!  You've only got to be able to negotiate tracks like Spa, Austin, Montreal and Monaco at nearly 200mph, with other cars mere inches away, while being able to operate your steering wheel, often without looking.  Here's the kicker: this is Shiv Hamilton's wheel, after he asked Mercedes to simplify it for him.

1 Huh. I would not have expected carpal tunnel to be a major hazard of F-1 racing.
You learn something new everyday.

2 Around 1997 in a Honolulu store I saw a steering wheel that Ayrton Senna had in one of his F-1 cars, there might have been six buttons and a dial on it.  If I can remember correctly the price was somewhere around 5k.

3 Is that a "drink" button there on the left?

Personally, I'm holding out for an automatic.

4 I like the purple dial with four different "default" settings.

6 These "simiplified" controls do not seem more complex than those I have in Piper Arrow, but there's a significant difference in that airplane controls have more to do with navigation and communication than with airplane's performance.

The "drink" button triggers a pump that delivers the Gatorade. You don't want to strain yourself sucking from a remote bottle through the 6-ft-long straw.

Pete, I have no doubt.  The question is, do you fiddle with the Piper's gizmoswitches while undergoing 5g manuevers a handful of times every 90 seconds, in close formation with other planes, at around 180mph?

8 Arrow cannot reach the numbers. Maximum sustained speed against the air is 155 mph and the maximum rated load is 4.4g. I hit 200mph against the ground once with a good tailwind, even have a picture of GPS.

The fastest and toughest airplane I have ever flown is North American T-6 "Texan". It tops well in excess of 200 mph, in fact I was going faster through Valles Caldera. It can pull 5g easily and actually it takes a certain attention not to black out accidentially.

But without doubt proximity operations are the hallmark of F1. They are made easier by the advanced safety that F1 racers enjoy these days, but back in the day Fangio was doing 75% as fast WITHOUT A SEATBELT.

9 My steering wheel has three buttons on it that control the radio/cd player.  I still use the ones on the dashboard because I can operate them without taking my eyes off the road.  That being said, I would love for a chance to drive an F1 car into the kitty litter or a wall.  (Assuming I could even get out of the pit lane.)