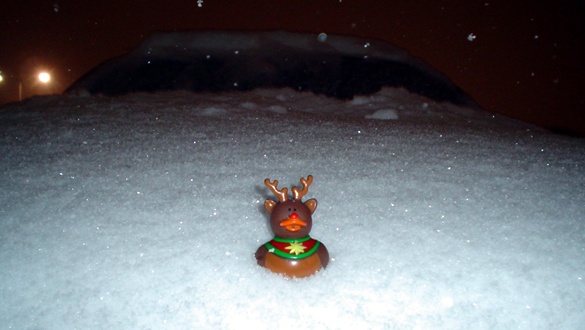 ...Rudolph the Red-Nosed Reinduck on a Toyota Camry!...two snowducks......and a duckie in a fir tree!

Rudy's photo was taken only an hour before the post was put up.  It's snowin' pretty durn hard out there right now, and the roads in Duckford are miserable.  Took me nigh on 40 minutes to get home, which is usually a 12 minute drive.

Glad to be back at Pond Central, lemme tell ya!

1 I was expecting something like three of these:
French ducks
I'll admit that this is the first time I've seen a Reinduck, though.

2 Believe me, I'd LOVE to do an escalating number of holiday ducks, as per the song, but that's beyond the powers of even my flock to accomplish.  Maybe someday...

3 Yeah, it'd be hard to make a holiday duck version of "maids a-milking".  I'd love to see you try, though.