The Meaning Of Ichiro Ichiro Suzuki recently got his 3000th hit in Major League Baseball.  This makes him the 30th player in MLB history to accomplish this feat.  That's great, but I'm more impressed that he managed this despite not playing in the US until 2001, when he was 27.  He's 42 years old now so he did it in 15 seasons-and-change.  He had to average right around 200 hits per year to do that. 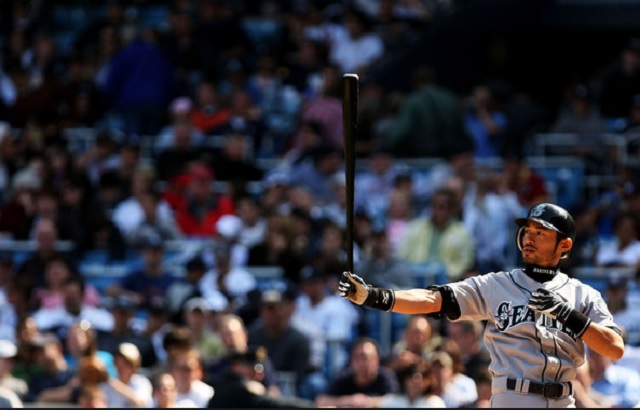 That deserves a "Wow".

In tribute to this amazing player, let us revisit his greatest moment ever (may not be entirely safe for work):

1 I find it amazing that people are fighting over how good Ichiro is.  He did more, in less time, later in his full career, in a more difficult league, than anyone else who ever played.  That kind of stands alone.

2 I seem to actually stumped Google.

Some years ago, maybe in the mid-late 90s, NPR profiled someone (a serious musician, if memory serves) who'd written  a light opera about his beloved Mariners.  All I remember about it is one bit of the lyric: "Ichiro swings a mighty fine bat/And there's not much a pitcher can do about that."

Quite  sure it wasn't "Ichiro's Theme" by Ben Gibbard or "Ichiro Goes to the Moon" by Scott Lewis McCaughey.

You now know everything I know about this, and may be thinking that what the nice people on Telegraph Avenue gave me that time wasn't just a plain sugar cube.  But I'm pretty sure it happened.  Anybody thinkin' what I'm thinkin'?

3 That sounds fascinating, so I went looking for it, too.  All the best search hits already had duck tracks, so I'm guessing we all found the same things.
The song I remember (sort of) is a novelty song about how to be a successful grunge band, which has a section about Seattle.  The singer menations Ichiroooooooooooooooo Suzukiiii.

4 Well, I'll tell ya.  After googling for nigh on an hour and turning up nothing, I did what I should have done in the first place: I went to the Seattle Mariners site over at Reddit and asked them.  Surely if it exists, someone over there would know about it, right?

The results can be described by the equasion "Diddly / Squat = X"  where X = bupkis.

Just what were you getting into out there in the desert while you were watching for lightning, Uncle Ad?

I find it amazing that people are fighting over how good Ichiro is.  He did more, in less time, later in his full career, in a more difficult league, than anyone else who ever played.  That kind of stands alone.

The is a straw-man.

The fight is over the fact that Ichiro was given affirmative action points for being Japanese, thereby "winning" the MVP in 2001 and since being overrated above better players, including those on his own team.  Since this has been conceded even by those who voted for him on the MVP ballot and the breadth of baseball professionals (including players), it makes sense that Ichiro's defenders would attempt to move the goalposts of the debate.

If Randy Bass represents the highest form of racial antipathy in baseball history, Ichiro Suzuki competes with Jackie Robinson in the anals of racial favoritism (contrary to phony stories that they both were "victims of prejudice").

6 Ichiro Suzuki competes with Jackie Robinson in the anals of racial favoritism...

1.  You misspelled a word there.

You want to answer this very carefully, Rykehaven.

7 Ichiro was given affirmative action points for being Japanese, thereby "winning" the MVP in 2001

That's not what I was talking about, at all.  To the point of my statement, whether Ichiro won, or deserved, an MVP in any given year is irrelevant.  I was talking about the fact that he amassed 3,000 (and counting) hits at a time, and in a manner, that was (and is) objectively more difficult than anyone else who has ever collected 3,000 (and counting) hits.  He did this while moving OUT of the prime of his career, measured by the standards normally accepted of mid-to-late-twenties to your thirties; he did it while moving from a competitive league normally associated with AA or AAA baseball to MLB; and is definitively one of the 5 fastest to reach the mark (although there is at least one person who tallied Ichiro to be the fastest, but I don't think that's actually official).

8 I believe this is the song Ben remembers. I have no idea of what AAPA's opera is.

10 I honestly have no idea what baseball fandom you've been watching.  Every discussion I've seen on Ichiro's 3000 hits have been filled with spurious allegations and derision, and a stubborn adherance to the idea that Ichiro's feat was inconsequential.

As a Texas Rangers fan, I've listened *to the radio announcers*, let alone a significant percentage of the fans, decry Yu Darvish's "Japanese mentality" as the reason he's a "garbage" pitcher that Texas should never have signed.  Darvish and Tanaka, and just about every other Japanese pitcher to come to the states, is yoked from the outset with the expectation that they'll succeed in their rookie year, then fall apart because "Japanese pitchers just aren't used to the level of competition."

That informs me that there is a widespread prudjudice *against* Japanese players, not *for* them.

11 No bluff, Rykehaven.  You are not welcome back here.