There's a lot of famous bends out there.  The Dunlop Curve at the Circuit de la Sarthe, home of the 24 Hours of LeMans.  The Lowes Hairpin at Monaco.  The Corkscrew at Laguna Seca.  The tri-oval at Daytona.  130R at Suzuka.  Parabolica at Monza.  The Kink at Road America.  The Karussell at the Nurburgring.  The list goes on and on.  But only one can be the greatest and in this duck's mind, there can be no other than Spa-Francorchamps' Eau Rouge. 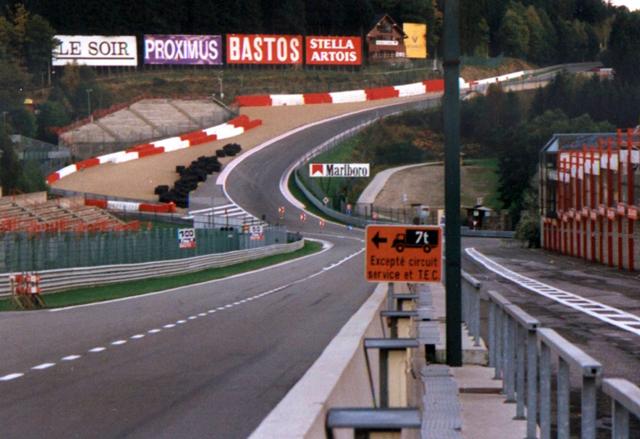 ...and here's what it looks like from near the top today: 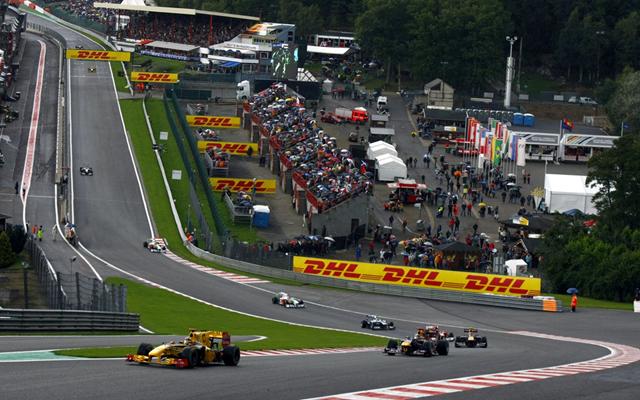 About 105 feet of elevation change.  Now imagine taking it at 160 mph, knowing that there's another (blind) curve waiting for you just over the hill.  While it's become a little bit easier for F1 cars to take Eau Rouge flat-out these days, thanks to high downforce and grippy tires, one still needs nerves of steel and attachments of brass to stick with it.  Most F1 drivers will praise it to the heavens, and that's good enough for me.

But visually Eau Rouge is a spectacle one doesn't get to see much anymore: part hillclimb, part turn.  Only the Corkscrew on the above list has any elevation change, and while it is steep, it's also short... there's no sense of the grandiose about it.  Eau Rouge?  If it could walk, it would swagger. 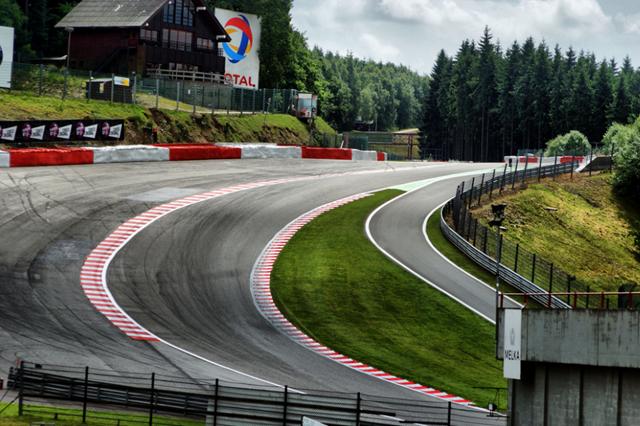 So that's my call for the greatest turn in motorsports.  What's yours?

1 I certainly don't have an opinion, but I recall that you thought very highly of something called "Quad-8" IIRC.

2 By the way, whoever owns that chalet at the top of that hill is sitting on a gold mine. I wonder how much they charge for sitting privileges at the windows of that place every year?

3 Actually... here are the best curves in motorsport. (ahem)

4 There's a turn like that on the road going to a house I used to live in, only the curve at the top is  a quick right with an immediate reversal to the left.

Coming down it from the top, it's a left-then-hard-right and DOWN!, and if you don't get it correct, you sail off into some dairy farmer's field, and whatever's left of you gets to soak in a pasture for 30 minutes until an ambulance gets there.

We were headed up it and a Chevy Monza came over the top too fast and in the wrong lane - he saw our headlights and swerved, which saved his life, but our Datsun 510 wagon nearly cut that Monza in two.

5 Actually... here are the best curves in motorsport.

So the best curves in racing are... straight and flat?

Regarding the chalet, I believe the answer is "if you have to ask, you can't afford it."

6 Whaddye mean "straight and flat"? You been watching too much anime. Real girls aren't built the way anime babes like Eris are built...

Ah, Steven... maybe I'm watching too much anime, but you're not watching enough racing.  I'm on my lunchbreak, so I can't do the legwork that I normally would, but off the top of my head, try this:

Do a GIS for "Milka Duno," "Vanina Ickx" or even your girl "Ashley Force," then tell me Danica is better.  Heck, you might even want to try Lyn St. James; you should remember her.

8 Miss Shirley Muldowney along with Miss Denise McCluggage set some sparks alight in the looks department. One of the nicer things about drag racing like amateur road racing is the chance to interact with drivers. Both of these ladies where & are class to fans, I have heard Miss Patrick might not be as gentile.

9 I'm ashamed to admit that I forgot to mention Sabine Schmitz, the Queen of the Nurburgring, on my list as well.

10 Below is a link to some great pics of eau rouge. It is mind boggling how these curves (eau rouge is the first left, what follows is called raidillon) are basically treated as a flat-out straight in F1 lately. Now add rain to that mix and you have a whole new spectacle. http://speedhunters.com/archive/2008/09/29/temple-of-speed-gt-gt-eau-rouge.aspx