The Flock Has A Sad Today 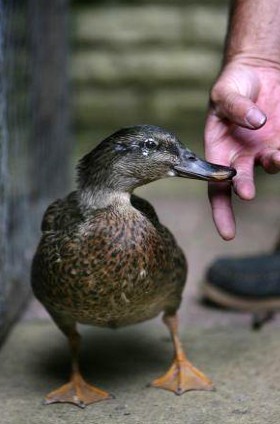 Twenty-two years ago, Christine Christopher and Ian Knight of Ringwood, England, rescued a small, injured duckling that had been abandoned by its mother as the runt of the litter.  They named it Edward, a name that turned out to be a poor choice when the duck began laying eggs.

Renaming the duck Edwina, the two nursed the little duckette to full health then returned it to the lake where they had first encountered it.

Edwina followed them back home, where she became fond of tea and toast.

For two decades, Edwina lived with the couple.  This past July, the British Trust for Ornithology claimed she was the oldest known wild mallard in the U.K.

"She hadn't been well over Christmas.   Her legs were a bit wobbly, and she wasn't her normal self.  We were planning to take her to the vet."

This past Monday, Edwina was found dead in her duckrun at the age of 22.  She was buried in the family garden with an ornamental duck placed on top of her final resting place as a memorial.

The Pond sends its condolences and thanks to the Knights for their care of Edwina.

I didn't know they could live that long.

3 Does this scare you, Steven?  Bwah-ha-ha-ha-haaaaaaaaa!

4 Why would I be scared of geriatric ducks? They gonna hit me with their canes?