The Flock Once upon a time, there was... a rubber duck.  Its name was, and remains, Scooter The Wonderduck.  This is that duck: 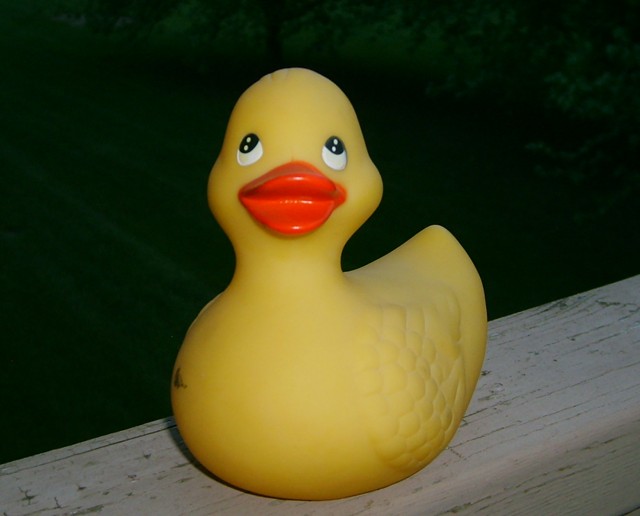 Scooter The Wonderduck has been with me since 1989 or thereabouts, and has place of pride amongst my flock of rubber duckies, for he is The First Duck.  He's in remarkably good shape for being 21 years old.  He's got a black smudge on the right side of his chest from falling off a U-Haul's dashboard, and his color has faded a little bit, but he's still a grand example of the species Anatidae Crocinus.  And tonight, my friends, he would like to introduce you to those who have come after him: Wonderduck's Flock.

Rubbaducks and one very hard to come across official Duck Race duck. 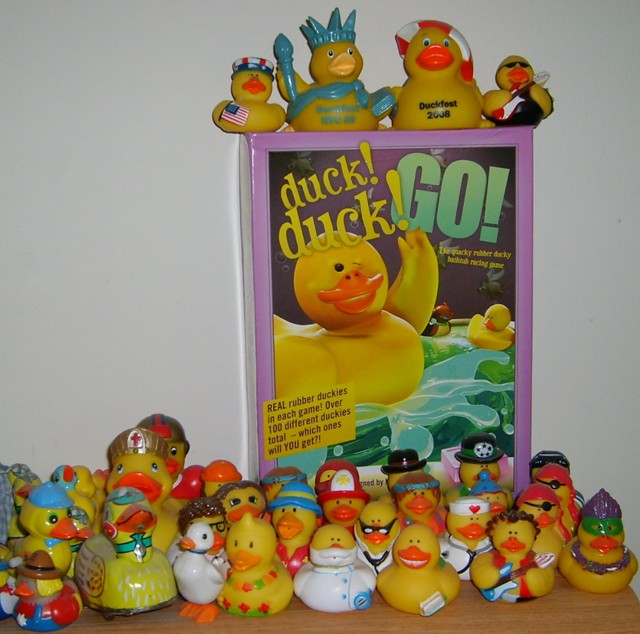 Duck Duck Go, courtesy of the comedy duo of Brickmuppet and Bob. 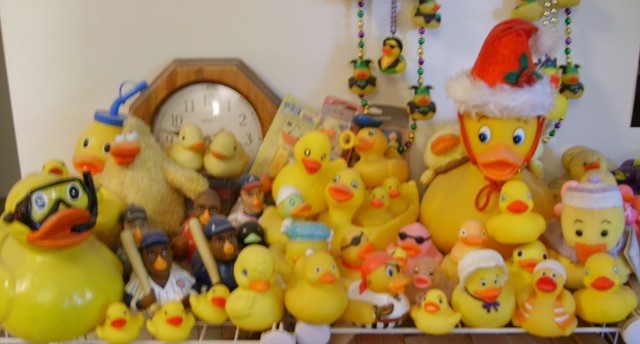 The scuba duckie on the left is actually made of plaster-of-paris, weighs a couple of pounds, easy.  The pink duckie in the middle quacks (loudly!) four songs, takes nearly three minutes for him to finish. 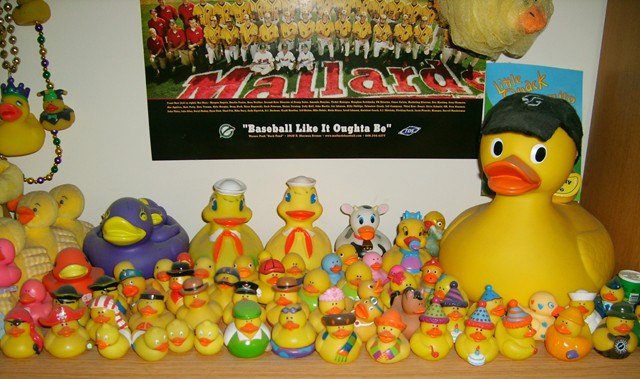 The Madison Mallards play in the southern division of the Northwoods League, a collegiate summer baseball league... they are not professionals. 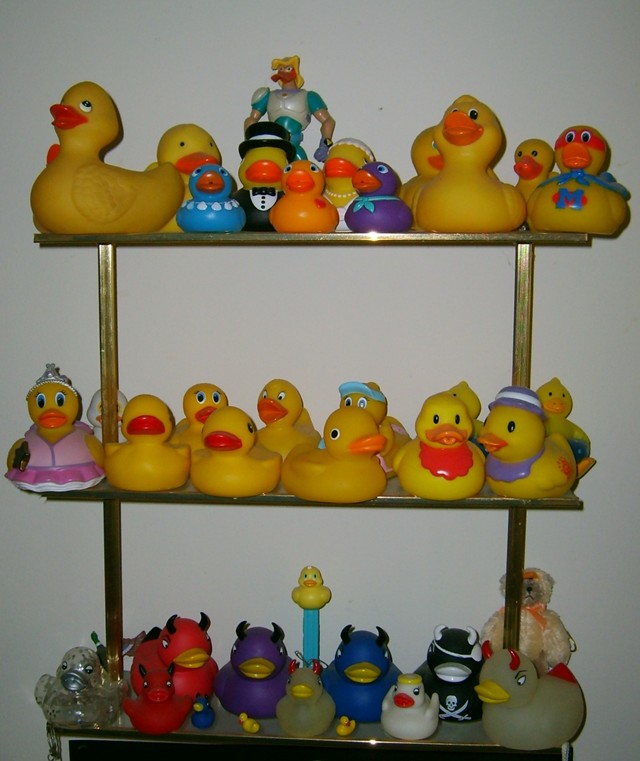 Yes, those ARE two tiny rubber duckies there at the bottom.  Well, okay, they're really metal of some type, but close enough.  For reference's sake, they're each about the size as a tylenol caplet. 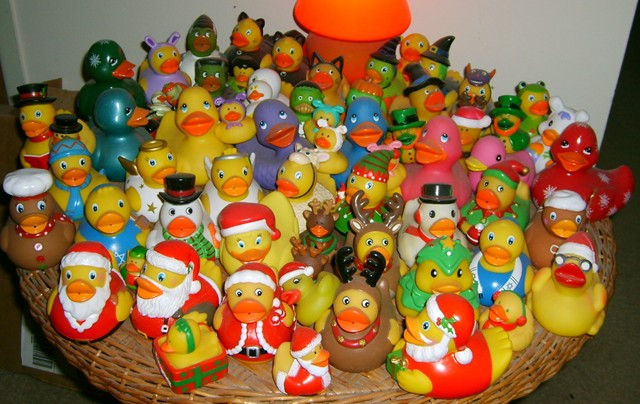 Rubber eatanter is not a duck.  The green duckie up front is from Germany, and has an actual squeaker. 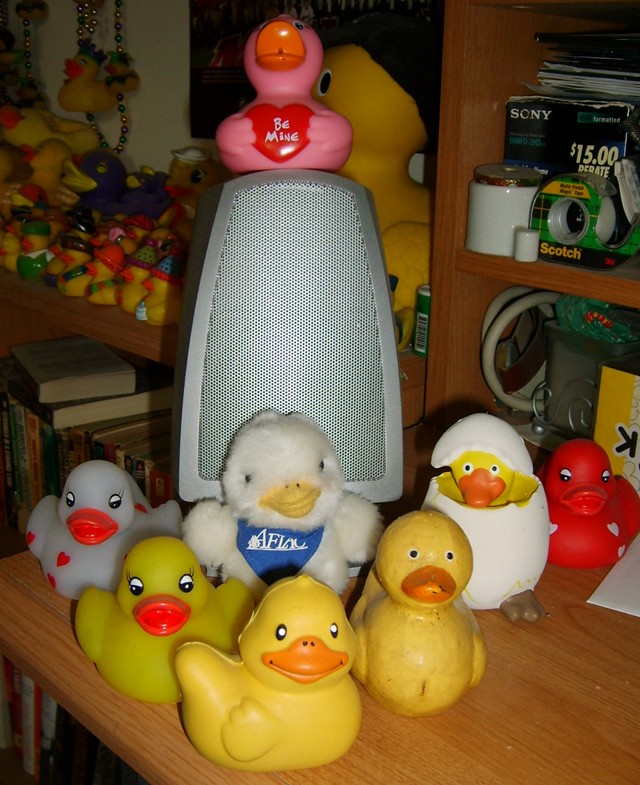 Rusty II (second row, right) appears courtesy of GreyDuck, who deserves a round of applause for making it to #100 with his comic Quacked Panes.

Ducks and manga: two great tastes that go... um... middlin' well with each other.

1 That's rather a lot of duckies!

And are those the Dirty Pair novels I spy?

2 But of course, right next to the two Haruhi Suzumiya books that have been released.  I've long been a fan of Kei and Yuri.  But then, who isn't?

3 Well, I have the green-snowflake duck, the Pez (tm) duck, Rusty I (of course), and maybe a couple more in common with you besides, but... WOW that's-a lotta ducks.

(Not all of mine made it into the 100-comic poster... and I didn't realize until after posting day that I'd forgotten The Commandos. D'oh!)

4 Score is in the third picture, just in front of the baseball Celebriducks, Grey.  Neil is next to the eatanter.  He's not readily visible, but one of the twins is in the Mallards photo, too.

5 And by twins, I mean "ducklings," of course.  And the green-and-pumpkin Halloween duck is in the holiday sub-flock, too.

6 I can see how I missed Score, but Neil is pretty easy to spot. Man, I must've been having a bad day...