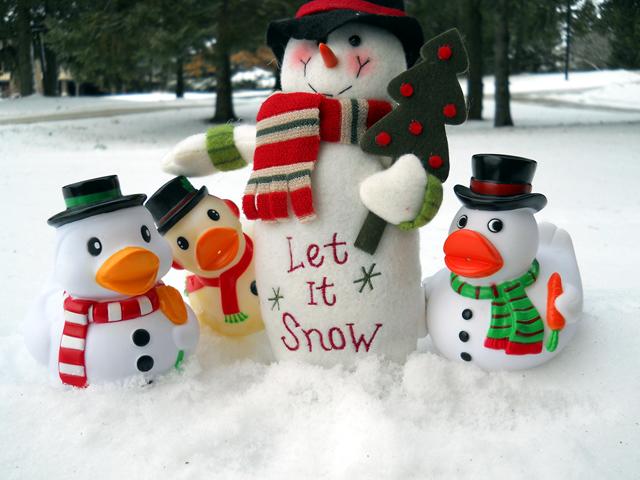 Sometimes I put a lot of effort into these photos.  The picture on the Third Day of Duckmas in 2009 is an example.  I had to come across the idea in the first place, figure out what duckies to use for it, then I ran around the Duck U campus trying to find a suitable bit of terrain... the day before the shoot.  Then there was getting to the top of the hill, not easy when it was as steep as it was and covered with snow and ice, setting up the duckies so they wouldn't blow away in the gusting winds and frozen surface.  Only then could I take the pictures, all the while hoping that they turned out because the sun was so bright that the screen was washed out.  THEN I had to trudge back up the hill and reset the duckies for another pose and do it all over again.  All of that was done with the air temperature around 5°F and winds blowing around 20mph.

Yes, sometimes I put a lot of effort into these photos.  And then there was today's picture.  Explaining to the Duck U HR office why I was borrowing their snowman took longer than the setup and picture-taking... and they're used to me doing odd things with duckies.  Yet this pic might be the one that turns out to be the best for Duckmas 2010 anyway.  Love it when that happens.

1 That is a really lovely picture. Well done, sir.