The Emperor Falls Peace reigns throughout the land as the results of today's World Motor Sports Council meeting were revealed:

There will be no breakaway FOTA series, with all teams committing to F1 through 2012.

The rules for 2010 will mirror the current rules and regulations.

Technical help will be given by the current teams to the three new teams next year.

Darth Bernie Ecclestone may have made some financial concessions to the teams, giving them a larger slice of the F1 pie.

...and Emperor Max Mosley, the sinister dark lord who nearly ruined the greatest racing series in the world with his power plays, is gone as the head of the FIA as soon as his current term is up in October.

There are tifosi Ewoks dancing as fireworks light up the skies over Monaco Endor.  FOTA The Rebel Alliance has blown up the FIA's monolithic oligarchy Death Star.

But that is a question for another day.  For tonight, Good has triumphed over Evil. 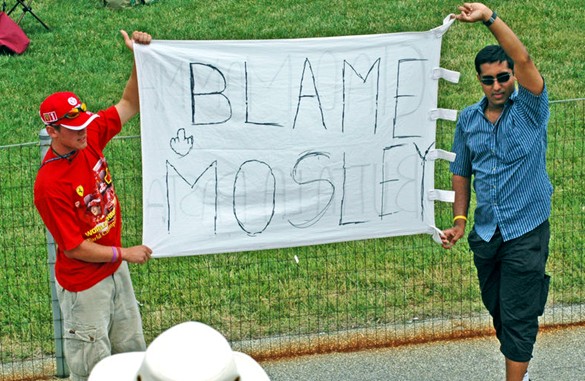 Wow! That's pretty amazing. I guess in the end the teams really do have the power, since it's the teams the fans want to watch.

With Mosley a lame duck, I wonder how much other mischief he can get into before he walks?

2 (You should pardon the term "lame duck" of course.)

3 No offense taken.  And, for once, it appears that the teams have actually formed an alliance that held together.

In a way, this is very much like the Cubs, Yankees, Red Sox and Dodgers staging a coup that forces the Baseball Commissioner to resign.

I mean, the FIA are the people in charge of Formula 1... and the teams have now, basically, taken control of the series.  That's the way it should be, logically, but it never has been before.

Personally, I can't see anything bad resulting from this.  I never had a problem with the budget cap (though I think F1 should be the ultimate in open-wheel technology, with all the spending that may entail).  I love the 2009 specs.  The tech aid to the new teams is a surprise, and I'm surprised any of the big boys agreed to it.

But the real win is the throwing of the Emperor down the ventilator shaft.

I think Max is actually the apprentice. And if Jean Todt appears in his place, he shall become the one to crave the power. Bernie has a magnificent ability to run and control things without any apparent position of power. This is what Todt will crave and learn.

Okay, moving on from analogy, it is wonderful news that we don't have a split, I've seen what that did to CART/IRL and it was horrible, death by a thousand lashes horrible. I'm just cautious that the beast is only wounded, not vanquished.

WHOOHOO!!!  Outstanding news!!!  And quite a relief that F1 won't become another CART/IRL disaster.

And somebody ought to watch Max Mosley on the way out to be sure he doesn't take the silverware (so to speak).

7 Irrespective of the rules, KERS has been a pretty big disappointment operationally, and this year's fastest cars don't carry it. I think KERS is dead even if the rules permit it.

8 Ed, as far as we know KERS is going to be optional next season, just as it is this year.  That's a change from the original plan, where KERS would be mandatory in 2010.

Since the rules next year are going to be a repeat of this season's, that would probably suggest that KERS is dead as a doornail.  Only Ferrari used KERS at Silverstone, and it seems that the only reason they've still got it is because their car was designed to run with it.  If they take it off the chassis, they need to have an equal amount of ballast in the exact same place.

In other words, dead weight.  KERS might not be a success, but it's better than lugging around 80 pounds that doesn't do anything.

9 So they're deferring the "no refueling" rule for another year?

13 (give up in frustration)

14 Ed, you can't put HTML inline. You have to use the gizmos. There's one in between the paint bucket and the one that looks like an omega, which looks like three chainlinks. Sweep-highlight the text you want to add a link to, and then press that one. A box will popup, and you can enter the URL into it.

You can directly edit HTML, but not in the normal entry box. Another one of the gizmos, on the right right side, that looks like this: <>

16 Thanks for the help, one more attempt. Autosport says Refuelling ban still on for 2010 season