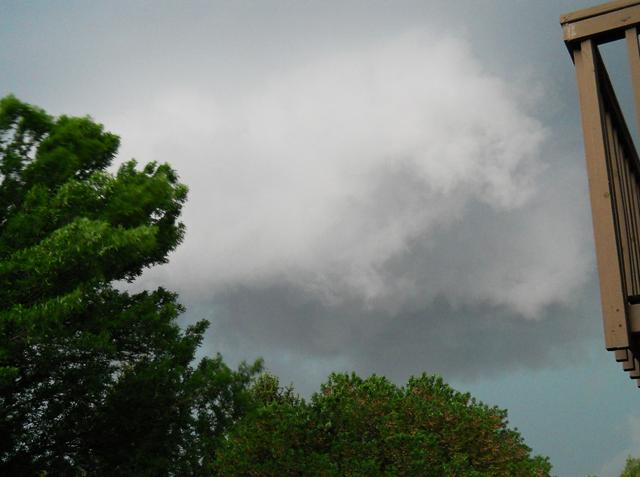 It's 1116pm, and it's still raining outside, but the weather nabobs tell us that the worst of the storms are over.  That's good, because there were three distinct storms that rolled through the Duckford area in four hours.  The picture above comes from the first one, just as the tornado sirens were going off.  What you can't see is that there was a distinct (but slow) rotation occurring in that mass o' clouds, in a counter-clockwise direction.  A couple of minutes after I took that picture, the cloudfront passed over Pond Central: 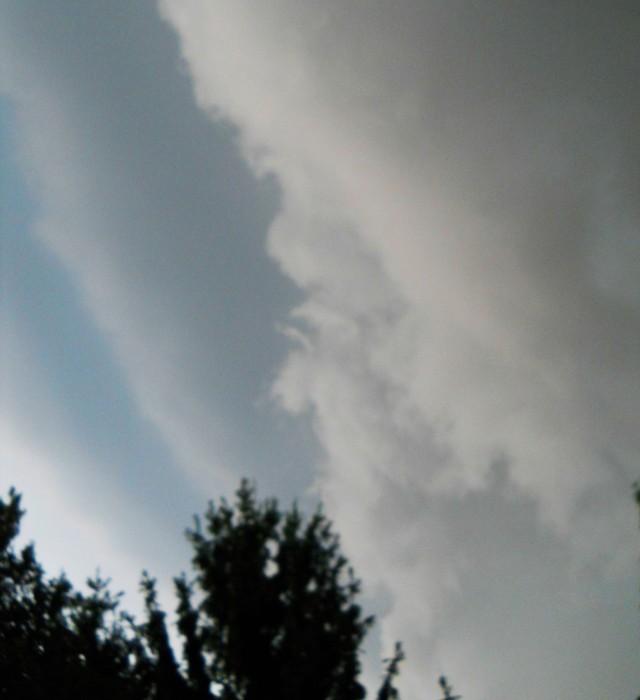 A few minutes later, all heck broke loose.  Heavy, heavy rain, lots of wind, pea-to-quarter sized hail, the temperatures dropped nearly 20 degrees in about 10 minutes, and a wind gust of 70mph at E State and I-90, which is about 4 miles from Pond Central.  Multiple funnel clouds were reported, one in the Machesney Park area (north of Duckford proper by about a mile or so), and a few to the east and southeast (Cherry Valley vicinity, about five or six miles from Pond Central).  Lots of trees down, some 25000 people without power, the roof was ripped off a school gymnasium, so on and so forth.  The National Weather Service is supposed to be here tomorrow to investigate whether this was all due to tornadic activity, a microburst or two, or just a damn big thunderstorm.

Now, that one was bad enough, but then two more storms rolled through.  Neither caused tornado sirens to go off, but they had a lot more lightning, and a lot more rain.  There's probably flooding in Duckford as a result.

Also as a result, I'm not going to post the F1U! until Monday... I gave up when the second storm peaked.  Shut down the computer, unplugged it and sat far away from the windows.  On the plus side, I am more than happy to report that the Gunslinger Girl manga is great.

Thanks for being patient.

2 Yeah, all's well here.  The Olde Home Pond is okay, as well.  Haven't heard from The Librarian yet, but I only just sent her an e-mail, and it's late.  She lives on the northwest side of Duckford, nearer to one of the funnel cloud sightings, so she might be w/o power, too.

Oddly, this all happened six months to the day of the Caledonia tornado... freaky.

3 Just heard from The Librarian.  She lost electricity around 7pm and it's still out.  There's a tree down at her place, too... but she's a-okay.