That Terrible Weekend. It was the San Marino Grand Prix, 1994.

First, it was rookie Rubens Barrichello, the protoge of Ayrton Senna, the best F1 racer at the time. Hitting the curb in the Variante Bassa at around 180mph, Barrichello's car was launched nearly over the tire barrier and into the catchfence.  His car was then ejected from the fence and tumbled two or three times, coming to rest upside down. 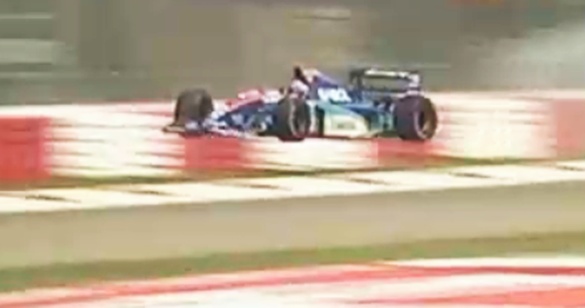 He had suffered a broken nose and arm, and was knocked out.  His tongue blocked his windpipe, and only quick action by the track workers kept him from death.

On Saturday during qualifying, Roland Ratzenberger, in his first year as a F1 driver (though experienced in LeMans-style racing) ran over a curb in the Acque Minerali chicane.  Unbeknownst to him, his front wing was probably damaged.  A lap later, he could not make it through the Villenueve kink and slammed into a concrete barrier nearly head-on at 200mph. 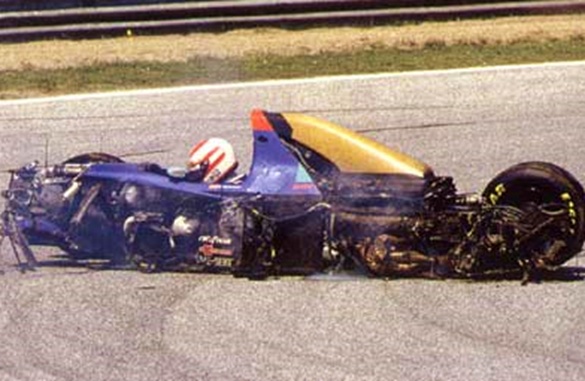 While the cockpit area was undamaged, the force of the impact caused a basal skull fracture (the same type of injury that killed Dale Earnhart Sr), killing him instantly.

Amazingly, on Sunday the race went on.  When the lights went out, JJ Lehto's Benneton car stalled on the grid and was run into from behind by an accelerating Pedro Lamy, bringing out the safety car.  For the next few laps, the field circled behind it, tires cooling and losing grip.  The safety car went off, and two laps later, came another accident. 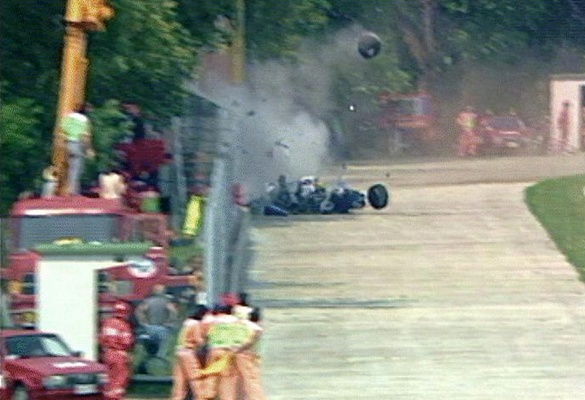 Ayrton Senna left the track at Tambourello, and crashed into an unprotected concrete wall at around 130mph.  The right side of the car hit the wall at a shallow angle, breaking the suspension and shearing off the tires.  It was not a devastating accident by any means.  However, the front right wheel was launched into the cockpit, then high into the air.  The tire had slammed into Senna's helmet, shoving his head back against the headrest with such force that he suffered severe skull fractures.  In addition, a piece of the suspension still attached to the wheel punched through Senna's visor just above his right eye.  Either injury would have been fatal on their own.

In the cockpit of Senna's car was an Austrian flag, which he had planned to fly after the race in tribute to Roland Ratzenberger.

As a result of that terrible weekend, many now-common safety rules were instituted by Formula 1.  The predecessor of today's HANS device.  Higher sills on the cockpits to prevent tires from striking the drivers.  Wheel tethers.  Improved crash barriers (and no more exposed concrete walls).  Redesigned tracks to lower speeds.  Higher crash tolerances for the cars.

No Formula 1 driver has died during a race weekend since.

Senna was given a state funeral in Sao Paolo, Brazil, and three days of mourning were declared.  The majority of the F1 community was in attendance, along with a half-million Brazillians.

Max Mosely, the president of the FIA, was not.  Instead, he attended the funeral for Roland Ratzenberger two days later.  In an interview 10 years after, he said one of the few genuinely good things I've ever heard him say: "I went to his funeral because everyone went to Senna's. I thought it was important that somebody went to his."

Rubens Barrichello has since set the record for career starts in Formula 1.  He has no memory of his accident.