That One Game Civ 5 is scheduled to come out in the Fall, and any self-respecting strategy gamer has already written off any productivity they may have had.  The release of new screenshots for the game has done nothing to alleviate that. 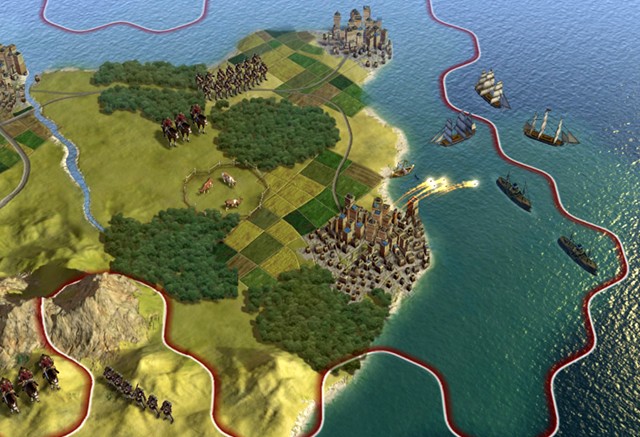 Oh, baby...
Any of us who have spent too much time playing for "just one more turn", no matter if it was Civ, MOO, SimCity, whatever, have That One Game.  That One Game is the one where everything that happened led to an amazing climax... maybe it was a tense struggle against overwhelming odds, or an incredible occurrence.  Maybe it was just a well-played blowout, who knows?  But oh, it was memorable... it became That One Game.

Mine was in Civ 3, a huge map and continents.  I was playing the English, started on what I wound up calling Australia: big island, green at the coasts but arid desert in the center... and practically no resources to speak of.  After a while I learned sailing and found, just off to the west, a very big continent filled with all the luxuries and resources a civ could need.  I also found the remains of another civ... three razed cities in the worst starting locations I've ever seen (after the game ended, I discovered it was the French.  Ces't la Guerre.).  Other than the home of the French, though, what I saw looked ripe for the picking... until I found what killed Napoleon.  The Zulus... and they weren't happy I was there, declaring war on me and quickly overwhelming the exploring archer I had sent over.  I put them out of my mind, as I had a tech lead on them, and vowed to revisit Africa soon.

Some long while later, I packed up two musketmen, a settler and a worker and sent them off to found a home base on Africa.  Once I got there, though, I found that the Zulus had expanded, taking most of the good territory.  So instead of colonization, I decided to make life hell for Shaka.  I dumped the musketmen and worker off on what appeared to be the only road between northern and southern Africa, fortified one of them, and had the worker build a fortress.  The other musketman began tearing up the any roads I could find around the fortress.  Within a few turns, Shaka had had enough... and the Impi began to move.  I brought the raider back to the fortress and waited.  And waited.  Eventually, I got a cannon over to the fortress as well.

Just in time, as it turned out.  Not one, but two Stacks of Doom converged on my little fortress, one from the north, one from the west... each of them composed of nothing but Impi.  Wincing, I immediately gave the fortress the name "Rorke's Drift" and crossed my fingers.  By the end of the first SOD's defeat, one of my musketmen had been promoted from "regular" to "veteran," and the other was about to.  Both were damaged, however, and the second stack was even larger than the first.

They held the line.  One of them died, and the other had one hit point left, but they held the line.  From there, the conquest of Africa was easy... almost everything Shaka had, he had thrown at Rorke's Drift, and most of them had died (some retreated).

I left that one musketman and the cannon stationed at Rorke's Drift for the rest of the game, even after I could have promoted them to other, better things.  They remained untouched, even through the later nuclear war against the Germans.  At the end of the little fracas that they started, the three cities closest to Rorke's Drift had been turned to radioactive rubbish, along with a few others on my side, but any German city over the size of 5 took an missile. But there they stayed.

And when the spaceship to Alpha Centauri finally arrived at its destination, I knew I had just finished playing That One Game.  From then on, I have never neglected building fortifications, and I have always had a lone outpost somewhere far away from the main action... in honor of the musketmen of Rorke's Drift.

1 What is that city shooting at those steam ships? Looks like Greek Fire...

3 Hmm.  Trying to think.  There are some games I've only run through once, like X-Com, so that automatically qualifies as "That One Game" for that game.  The final mission on Mars was made of pure awesome and sheer terror, like when one of my two guys carrying the heavy rocket launchers got mind-wiped and took out his entire squad.

4 I don't really remember specific game sessions that way. I do vaguely remember the first time I tried to assault an enemy base (on Earth) in X-Com and how utterly terrified I was, but I don't remember anything else about that particular session.

5 The 'one game' that comes to mind for me was a session of Warlord (II, I think).  I had gotten a pretty good start, had one of my borders well fortified and was busy pounding on the AI on two other fronts.  I'd scouted far enough ahead of my "stacks of doom" that I was fairly confident of carrying through to wipe out the two AI players I was actually engaged against.  Unfortunately I hadn't scouted far enough forward to notice that Lord Bane was punching through one of them from the other direction.  When our offensive forces met in the lands of our unfortunate mutual foe, I lost two major hero stacks, and shortly after that I lost most of the newly captured cities.

I quickly realized that I had nothing in the immediate rear of that campaign that was going to stop the marauding Lord Bane stacks, and at the same time I was reaching the last heavily fortified cities on the other front, where that AI was rallying for a last stand.  It was pretty obvious that if I pulled those forces back, I'd end up losing a ton of ground on that front, but it was equally obvious that if I didn't come up with something really nasty to throw in front of Lord Bane quick I was going to lose a lot of key unit building territory.

What turned the looming disaster into an epic game is that I still had some scouts out on the third side of the map, just keeping an eye on the two AI players over there, and I discovered that they had never expanded onto one island, which I quickly claimed, grabbing a couple good cities, and more importantly exploring some ruins that yielded up an excellent weapon for my reserve hero, as well as a stack of dragons.  I pulled together a stack of supporting units from various places that could all move quickly and rushed that hero/dragon stack down to finish off the lesser threat while I moved everything else I could free up toward a choke point facing Lord Bane.  I lost maybe six or seven more cities to Lord Bane while I was finishing off the other opponent, but then I was able to pull everything back from that side of the map and send them off to the front, at which point I smashed two of Lord Bane's stacks o' doom and stopped his offense.

From that point it was just a bit of back and forth as we fought over the border cities and assembled our armies.  Eventually I had three hero-led stacks o' doom ready, as well as a few support stacks to follow along and fortify cities as I took them, so I started pushing forward.  Lord Bane had built up enough that I lost on stack, and the other got whittled down so far that it had to retreat, but the last stack with that one hero and his dragons took everything he could throw at it and just kept getting stronger, eventually carrying through to conquer pretty much the whole map.

And now I will go see if GoG has Warlords II in their product line...