Thanksgiving 2011 I like pumpkin pie.  A lot.  So much that I'd be perfectly happy having pumpkin pie all year round.  Which is why I don't let myself have pumpkin pie more than a once or twice a year.  Thankfully, today is one of those times. 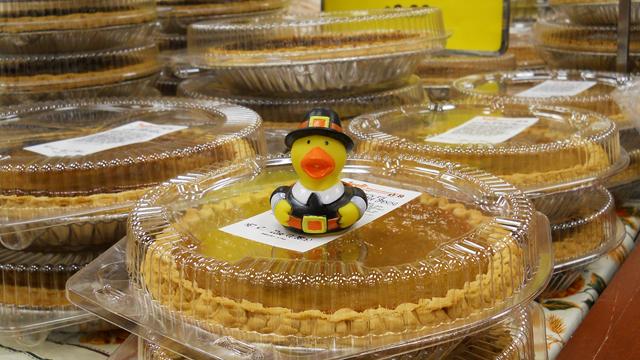 1 This recipe is my fave variation on Pumpkin pie & it can be no bake too, ffw in a busy holiday kitchen. Note I make mine w/a gingersnap crust.

Combine the first 7 ingredients a a saucepan..
Stir in the milk, egg yolks, and pumpkin.
Cook and stir the filling over medium heat until the mixture boils and the gelatin dissolves.
Remove from the heat and chill until partially set.
Beat the egg whites until soft peaks form.
Gradually add the sugar and beat until the whites form stiff peaks.
Fold the beaten whites into the pumpkin mixture with the whipped cream.
Pile the filling into the crust.
Chill until the filling is firm.

Note that, if you use a graham-cracker crust, this is a no-bake pie which can be pretty handy with all the trafficking through the oven that goes on on Thanksgiving.

2 Pumpkin Pie is the best! And a duck atop it makes it even better!