SuperAguri is on the track for P1! UPDATED! SuperAguri is participating in Friday Practice session 1!  This is good news, as Honda had given them a deadline of Prac1 to get a financing deal done, or they'd have their engines pulled.

Takuma Sato took his car onto the track a couple of minutes into the session.

That live timing and scoring system on formula1.com is pretty darn spiffy, y'know that?  Oh, sure, it meant that I had to stay up until 3am Pond time to find out if my favorite team still existed, but it's a small price to pay.

It's now 311am, and Ant Davidson has started practicing, too.

Now, the big question is, will they be in P2?  If they are, you can pretty much guarantee they'll be racing for real come Sunday.  If not, no chance at all.

However, this little duck won't be awake for it.  I'm going to bed right now.

UPDATE:  Indeed, SuperAguri did take the track for P2 as well.  While they couldn't get a deal done to provide them with funding, Honda realized that since the team is already in Spain, they may as well fund them for one last race and use the SA cars as testers, so as to get the race data from the engines for their own team's use.

So SuperAguri gets another stretch of time to obtain funding.  It doesn't look good for the little team that started out driving the 2002 Arrows chassis.  Damn shame; last year looked so promising.

The only real interesting thing to come out of P2 was Heikki Kovelaeinnienninnie's McLaren coughing and dying, and Lewis Hamilton only being 11th on the timesheet.  One can assume they were working on race setup and fuel runs, but it's still not a pleasant thought for the team.

Oh, and Honda IS running the handlebars in the race, AND a new rear wing to boot: 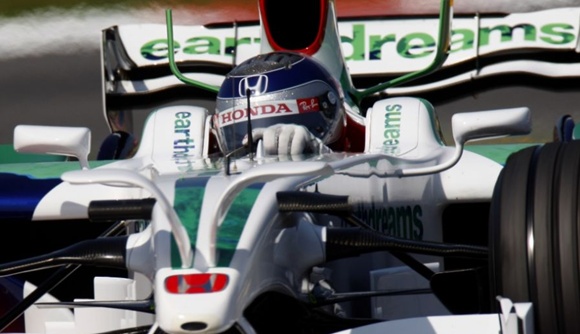 Mmmm... bendy!
They're almost getting embarrassing, these guys.

1 I can't imagine what they're thinking. They've also got those silly horns next to the air scoop? What is it they think they're going to achieve with them?

2 The horns at least have a track record; McLaren's been pretty good since they debuted them a few years ago.  I figure they're used to steer air in a particular way over the rear wing.

I wonder if the wavy rear wing is an attempt to get more surface area in the same space (note: the FIA mandates how wide a wing can be)?  Doesn't seem like this one would make a huge difference, but one could imagine how it can be done...