Speech-like Substance Back in the days of enforced vacation, it was common for me to not leave my apartment for days at a time.  Indeed, at one point it reached 10 days, but that was because it was very very cold, and ducks hate cold.

However!  During those times, even in the worst of the periodic depressions I would go through, I would still talk.  Maybe an Amazon delivery would be delivered by the postal worker, or I'd get a phone call from Ph.Duck, or maybe, just maybe, a phone interview for a job.  In any case, words were a definite thing I'd do. 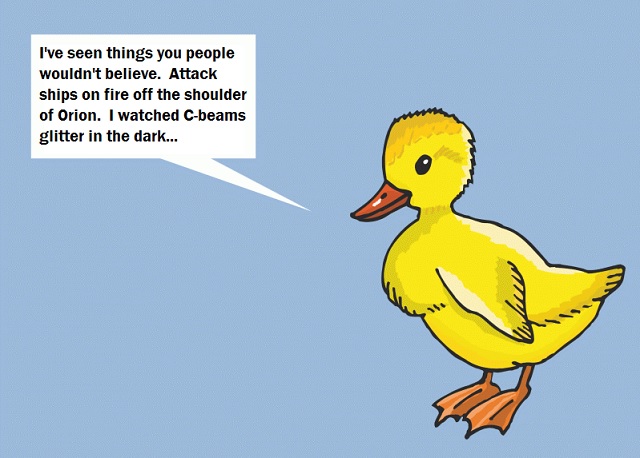 Which makes it entirely strange that I've literally not spoken a word since approximately 630pm Monday evening.  I went to work at my normal time, left ten hours later, and not one word was said.  Not because I was being unfriendly or anything like that... there just wasn't any reason to say anything.  Nobody directed conversation my direction, nor vice-versa, my next-door neighbor is sick so she hasn't been in this week, my boss who's always up for Cubs talk is on vacation a business trip, and during my lunch I went into the breakroom and promptly fell asleep for the whole thing. 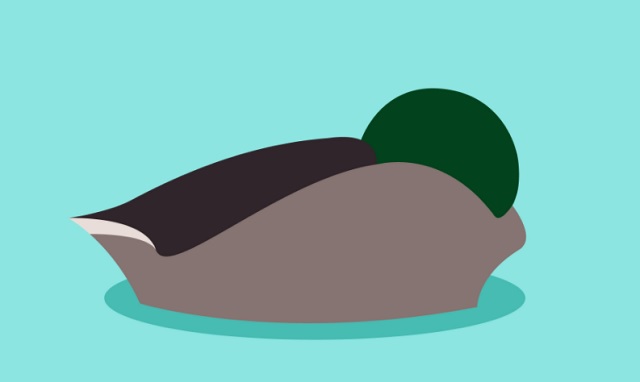 People used to find it amusing, but nowadays nary an eye is blinked.  But anyway, as I write this it's going on 30 hours without speaking, and the earliest I'll be in to work tomorrow will be 9am... well.  I dunno about you, but when I go a while without vocalizing, my voice comes out like a bag of gravel being dumped down an HVAC vent.  Should be interesting tomorrow.

1 I usually can't go that long.  I start talking to myself.  Just say thoughts out loud instead of internally.

2 Same here, Ben. Lacking conversation partners, I'll pair off with myself and I won't even catch myself doing it for a few minutes...

3 I talk to myself even when other people are there to hear me. I try not to do it at work, but when I'm digging into budgets, I usually have to verbally walk myself through what I'm doing or my train of thought becomes completely derailed.

Also, I just plain like talking to myself, because I can set myself up for all the best lines. So yeah, when you're driving down the road and you see a chick in a blue car talking a blue streak even though there is no one else in the vehicle...that might be me. Thank goodness for hands-free phones because now people just assume I'm using one of those.

4 Talking to yourself: normal. Holding a conversation: normal. Having an argument: questionable. Losing the argument: nuts.

5 Cats can be a convenient speech target.

6 I went until 2pm without saying anything, and that was "Thank you."  My boss, who is on vacation on a business trip, sent the team a picture of her looking stern with the message "I'm watching you."
I replied with this, there was much laughter around the room, and someone said "Great response, Wonderduck."  It would have been churlish of me not to say something.