Snowmageddon 2011: 2/2, 845am (UPDATED @ 1242pm) I'm not the sort of person who swears very often.  Unlike many people these days, I believe that using profanity in everyday conversation is vulgar and childish... and I never use it here at The Pond.  No, when I use an unpleasant word, it shows a moment of very high emotion.  I'm explaining that so you really understand what I'm about to say. 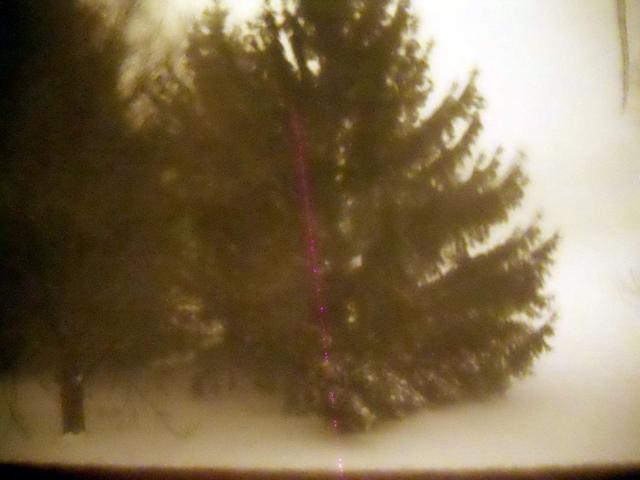 The picture above was taken at 1am.  That red line stretching toward the tree is from a laser pointer... a clearly visible beam that stretched all the way to the tree.  It was visible because of the snow coming down and passing through the beam, basically like what you'd get if you blew smoke into the laser.  Around this time the wind was howling, the snow was falling around two or three inches an hour, there was thunder and lightning, it was terrifying... and awe-inspiring!

You may remember the post I put up with a picture taken at 310pm yesterday.  Well, here's a picture I took about a half-hour ago: 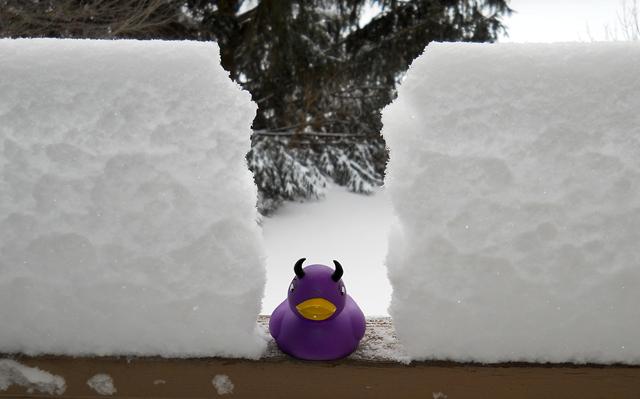 ...and that's on the railing of my sheltered balcony.  The wind was coming from the north... my balcony is on the opposite side of the building.  Here's the view of Pond Central's parking lot, which is on the north side: 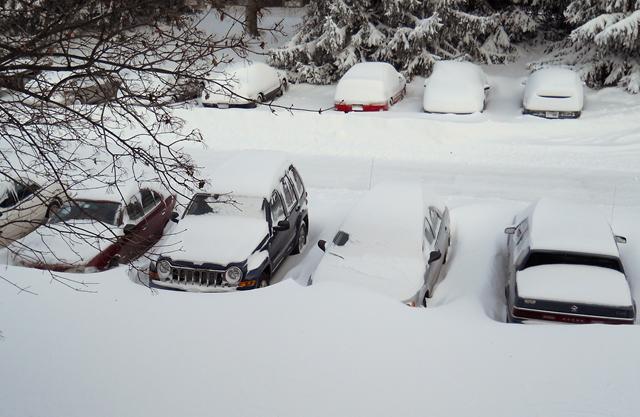 Yup.  The good news is that the snow seems to have stopped.  The Duckford International Airport is saying "only" 13.5 inches of snow fell overnight, but there are reports of 17 and 20 inches in other parts of the city.  Some rural roads have 12 foot drifts over them.  Hundreds of cars have been reported to be stuck on the various highways and streets near Duckford.  Most roads, both in and out of the city, are reported to be impassable.  Duck U is closed today, of course.

This is supposed to be the fourth-heaviest snowfall in Duckford recorded history.  Now comes the shoveling.
UPDATE @ 1242pm: Snowdrifts up to my waist.  Took four men with shovels a half-hour to dig my car out.  Once my car was done, we moved on to the car of one of the other guys.  Then we did the car of a teenage girl who needed to go to work (and helped push her out, too... the snow drifted high under her car).  Then I moved my car to a different spot at the far end of the lot, right next to the place the snowplow will start his snow-moving efforts... which means I won't have a four foot pile of snow to deal with in the morning!  Just negative temps...

After going through the snowiest December on record here in Minneapolis, you have my shallowest condolences (you certainly don't need any more deep stuff at this point.)

2 Mikeski, I lived in Mankato for two years.  My first snowfall up there was the Halloween storm of 1991 (27.5" of snow in 12 hours).  Just next to my computer is a coffee mug (used as a pen holder) the Star-Trib sold after that, with a replica of their masthead and the headline from the next morning: "It fell and fell and fell..."

So I know what it's like up there.  I'm very sorry for your travails!

3 ...and this is the furthest south I've ever lived.

4 I was a bit west of there WonderDuck in New Ulm. It took three days to open up 169 into the cities & at that it was one lane in both directions.

6 I'm starting to feel like one of my neighbors did some sort of deal with the devil or something, because in every direction we can see, folks are getting hammered by the winter from hell, and yet our little valley has been spared the brunt of the blast every single time.  We barely got a quarter-inch of ice from Snowzilla, and it had melted into a partial slush by late morning.

So, hypothetical neighbor, I'm not sure my idyllic winter was worth your eternal damnation, but thanks anyways.