Six Years Ago I woke up at my usual time, took my usual shower, got dressed in my usual clothes, and drove to work in my normal way... and I remember none of it.  I got the Duck U Bookstore ready to go for the day... and felt sluggish, like I hadn't gotten enough sleep.  I sat at my desk, stared at the pile of paperwork in front of me, sighed and started in.  I began sorting through the stack of invoices, credit memos, statements and junk mail, literally shuffling paper from one pile to another.

Then with no warning, my heart felt like it had fallen down a flight of stairs and began to race.  Faster and faster it went until it was too fast for me to count.  I got up from my desk, walked outside, walked back into the store, and asked a coworker to call 911.


There was no pain, but I felt awfully tired... despite not actually doing anything.  My heart kept beating faster and faster.  I explained what was going on to the person on the other end of the phone, sort of, I think.  The head of Duck U Security showed up, took one look at me, and got on the radio to tell the mobile unit to hurry the ambulance to the Store.

When the EMTs arrived, one of them began talking to my coworkers, asking questions that I couldn't care about.  The other one asked me the usual questions: Do you have any pain?  Does your arm hurt?  What day is it?  What's your name?  And on and on, while he put a sphygmomanometer on my arm.  I distinctly remember seeing a look of confusion on his face.  He then reached for my wrist, waited a few moments, then said, quite clearly and loudly, "I can't get a pulse."  They then guided me onto the stretcher, got my jacket, laid it over me (it was cold outside), and quickly rolled me towards the waiting ambulance.  As I rolled out, my eight-months-pregnant boss came walking in from a doctor's appointment.  "I'm going to have to take a sick day," I said to her.

In the ambulance, they got me hooked up to various and sundry machines that go *PING* and finally managed to get a pulse... it wasn't that my heart had stopped beating, it was going too fast for a mortal man to count.  I was later told it was around 250bpm... great for a dance bar, not so hot for a heart.  My blood pressure, which so confounded the poor EMT earlier, was somewhere around 300/200.  I suppose he was surprised blood wasn't squirting out of my pores.  Quickly enough they got the stretcher locked down and me strapped in.  After what I assume was a fast consult with the docs on duty, but could have been an hour or more, the EMT working with me said that they needed to give me a drug that would stop my heart.

Looking back at it now, I can't imagine how I managed to either a) keep calm or 2) not crack a joke ("Dead for tax reasons").  Instead, I just said something to the effect of "okay," as the ambulance sirens began wailing.  "It's going to be uncomfortable," the EMT said, and gave me the shot.  He was right.  It suddenly felt like a cinderblock had appeared on my chest.  Not dropped, not placed, just... there.  No dice; now my heart was flying like the wind AND there was a brick taped to it at the same time.  "Okay, I'm going to give you another one."  And he did, and then there ANOTHER cinderblock on my chest... and my heart stopped.  Not for very long, I admit... probably for a normal-interval beat.  And then it started up again at a speed closer to something normal.  Still fast, maybe 130bpm, but that's a helluva lot better than where it was.

They got me to the hospital, wheeled me into the ER, took some blood... and left me there for nigh on six hours.  Every now and again, a nurse would poke her head into my stall to make sure I was still alive.  Eventually, they decided to keep me overnight, for some of my body chemistry was a little screwed up: my magnesium and potassium levels were somewhere around 1.0.  Normal scores are around 4.0.

Late that night, as I sat alone in my darkened hospital room which used to be part of the "mentally infirm and suicidal" wing, the cardiologist came in and told me I had had an attack of Superventricular Tachycardia.  Basically, something had caused my heart muscle to lose its correct rhythm and turn wacky-go-nuts.  They were going to shoot me full of potassium and magnesium to correct that imbalance, and go from there.  The magnesium bag went into the vein just fine.  Potassium, which is vital to the correct operation of your heart, is apparently created out of molten lava, razor blades and ground up thagomizers, for it hurt as it flowed into my arm.  Actually, "hurt" isn't strong enough.  It felt like my arm had been set ablaze from the inside.  They slowed the flow of the fluid down as much as they could, which meant it only made me want to gnaw my arm off at the elbow, not the shoulder.  I slept quite poorly that night.

Six years later, I take four potassium pills and four magnesium pills daily.  I also take what I call my "Keep Wonderduck Alive" pills.  It's actually a blood pressure medication, and while my bp was a little high before the event, it didn't really call for medication.  However, the pill has a side-effect of controlling heart rate... this is a good thing.  I've not had a repeat of the event since.  To be fair, I'll be on this med for the rest of my life, but because of it I actually can have a life.

Which brings me to my annual pronouncement.  If you ever feel something odd going on with your heart, CALL 9-1-1 IMMEDIATELY.  While Superventricular Tachycardia is not life-threatening in and of itself, the heart is a muscle.  Like any other muscle, overuse can lead to strains, sprains and tears... and you do NOT want to sprain your heart.  While I was lucky in that everything that could have possibly gone my way during the event (people around, ambulance in the area, hospital very close by, etc etc etc), did go my way, it doesn't take much of an imagination to see where so many things could have gone differently.  The heart isn't something to take lightly... if it doesn't work, You ARE DEAD.  There's no such thing as "toughing out" a heart attack.  Call for help.

The Pond doesn't have enough readers to lose one. 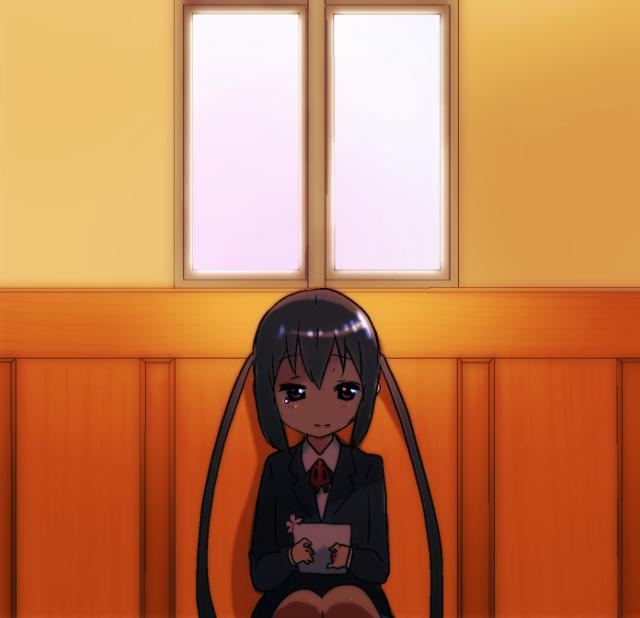 2 Glad you pulled through. I enjoy your descriptions of anime. There must be way different IV doses used for potassium and magnesium. I get those two put into my normal saline IV three times per week. All they do is slow the pump down, from about 500mL/hr to 450 or so. I've never noticed any pain when they put them in. (My case is tumor removed, chemotherapy and radiation therapy, and now, finally, on the upswing with just hydration therapy. My job is to grow a new throat and keep it healthy. Working just fine, if only I could eat.)

3 Bob, in my case the magnesium was fine.  It may as well have been cotton candy and unicorn farts (but I repeat myself).  As I remember it, however, the potassium was a separate stick from the IV drip, not added to the saline.

I may misremember, as it was six years ago and I was terrified.  Plus the White Sox were winning the World Series, which just made being in a hospital that only had four channels on the TV even more horrible.

Thanks for kind words, Bob... keep up the good fight, there's a slice of cheesecake waiting for you.

4 That "potassium" was really zombie juice.  Welcome to the ranks, undead brother.

6 Some of those chemicals are crazy.  Like when you lie down for an MRI, and the tech sticks the needle in your arm to inject contrast, and _then_ tells you "you may feel like you've wet yourself."  And doggone if that's not what it feels like.
I don't even want to know what's going on there.

7 RickC, back when I was a student at Duck U (as opposed to working there), I managed to split the surface of one of my kidneys performing a stage fall (landed wrong, my elbow went into my side).  The next morning, I woke up in what could only be called blinding pain and I was... well... there was blood involved in the morning ablutions.  Not fun.

As you can imagine, I went to the hospital and they gave me a MRI.  While the contrast felt... odd... in my arm, it didn't make me feel like I had wet myself.  The weird thing was that they told me to keep my arm straight and extended above my head as the contrast flowed in.  They even strapped my wrist down to keep it from moving.

By the time the whole MRI was done, well over an hour later, my shoulder refused to work because of the way they'd tied it down.  The arm just... dangled.  Weirdest feeling ever.