Showboaters It was late, I was getting tired, and I decided that before I made my way into the embrace of Hypnos, I'd go take a few ships out for a sink in World of Warships (I'd had a run of bad luck recently).  Once I had signed on, I discovered that Avatar was online as well... and shortly thereafter, we had been joined by David.  After a few successful battles, I finally realized that I was on the verge of falling asleep in my chair.  I called for one last fight, but we needed to get some glamour shots of the squadron before we packed it in.  Av and David both agreed.  David brought out his brand-spankin'-new Wyoming-class dreadnought, while Av and I decided to play escort in our St Louises. 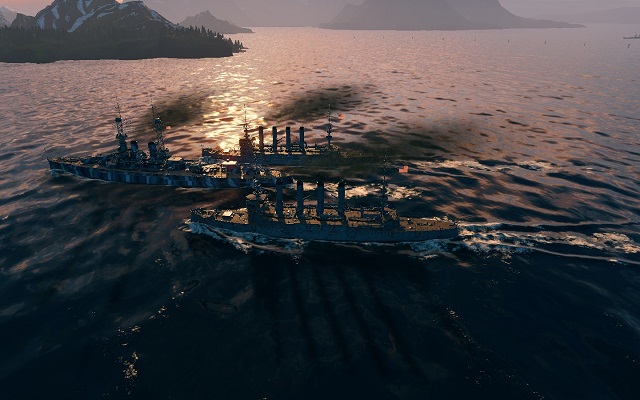 Since David was both larger and less able to maneuver than our more nimble cruisers (and this is probably the only time you'll hear a St Louis described as "nimble"), the task of getting close fell to us.  Av's declaration that we'd "get close enough to jackstaff cargo" notwithstanding, it proved to be slightly more difficult than I expected.  On the other hand, Avatar's crew was playing frisbee with David's, so what do I know?  For the record, that's Avatar at the top, David in the middle, and yours truly at the bottom. 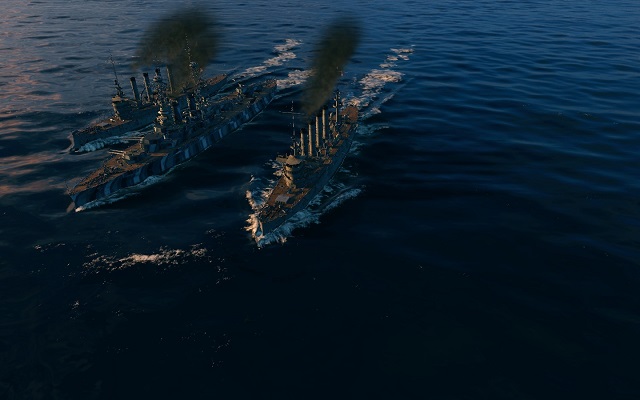 Closest approach.  Throughout the night, the three of us seemed like we'd been maneuvering together for years.  Indeed, at one point I was in my South Carolina and the other two in St Loo's, and the way the game started put them in front of me.  The game began, Avatar moved a kilometer ahead of David, and I was a klick behind, bringing up the rear.  The appearance of a bad guy off to port made Avatar call for our merry band to head that way... and from my vantage point, all three of us began the 90-degree turn at the same time, and finished the turn at the same time.  Like we had planned it that way, and had drilled in the battle turn together for weeks.  It was really quite cool. 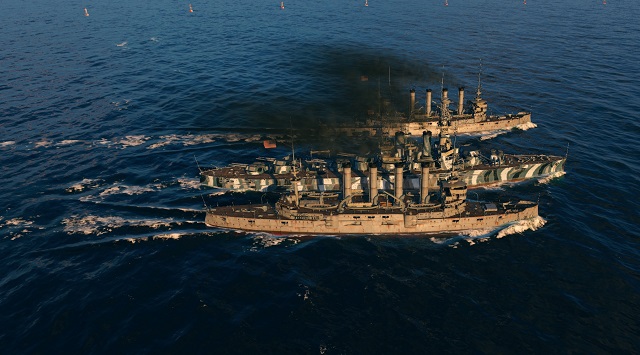 Alas, my position at the left of the formation meant that I was on the "shadow side", and thus all side shots were silhouetted against the setting sun.  I could not pivot my camera around far enough to get a shot from the right side of our band and still get all three of us in the shot.  Fortunately, David took advantage of not having to do anything but motor straight ahead and got some decent shots himself; by all means, click on it for a larger version.  Look at that battleship, all dolled up in a purty camouflage and stuff. 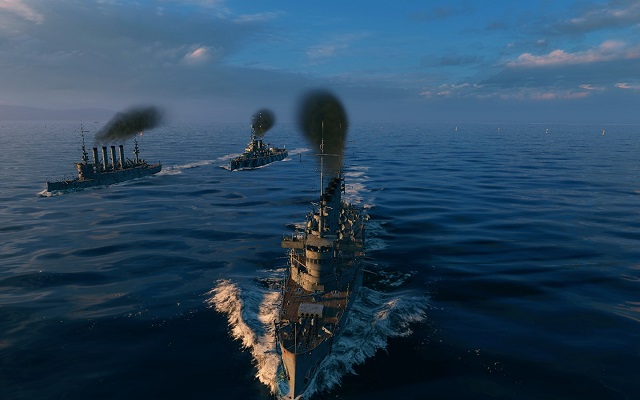 Alas, all good things must come to an end, mostly because the bad guys finally showed up and it was time for us to go to work.  It was a good match, but really, the most fun was our attempt at imitating the Blue Angels in ship form.  We honestly cleaned up, our little band doing a good job while being slightly outnumbered.  Towards the end of the match, however, my discipline broke down as I laid eyes on the one sight every surface skipper wants to see in battle. 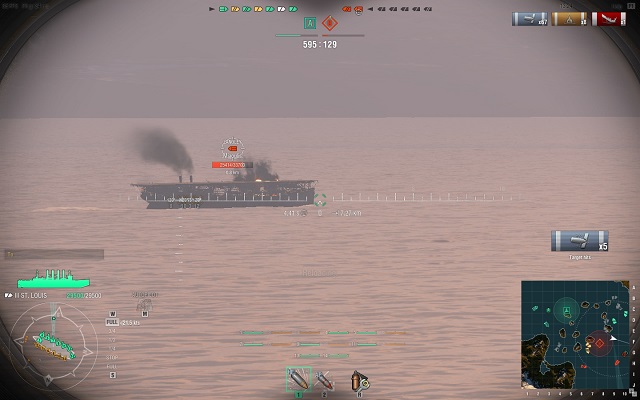 "CARRIER!" followed by sadistic chuckling.  Now, this particular carrier had been a pain in the butt all game, so it was with pleasure that I gave it broadside after broadside, setting it ablaze a few times... until I racked up three citadel hits in one volley.  Understand: in WoWS, citadel hits are like hitting a grand slam home run.  A single citadel hit can take half a battleship's HP away.  Three of them at once on a carrier?  Surprisingly, it didn't sink from that, but if I had sneezed on it, it probably would have capsized.  It only took one more hit for it to get all splodey.  Good times, good times.

So why aren't you playing?

1 It looks pretty, but it's definitely not in my fun-time-gaming strike zone. Sorry!

(I picked up Diablo III this weekend, after playing through the "Starter" edition, cackling with glee.)

2 Alas. Seems like you guys get on way too late for me. 5a.m. wakeup calls and wrestling a toddler in the evenings means at best 30 to 60 minutes of free time to blow stuff up. Usually around 8:30 CST.

3 5 AM is when I turn in for the night. Evening shift is a bit inconvenient but has its own advantages...

4 I enjoy World of Warships, but only in small bits.  I'll play for a week or so, then get tired of the grind and put it down for a month.  Rinse and repeat. I'm almost to the US carriers and t5 ships, but my St. Louis is my favorite ship to use, though I enjoy my destroyers too.

5 Tom, if you get tired of the grind and you don't have Tier V ships or carriers yet, this is not the game for you

I binged on the game for the first two weeks after I started playing, and that got me to Tier IV across the board, as well as my first carrier and my first Tier V cruiser.  After that I slowed down a bit, and I got my second Tier V cruiser last night.  I expect to get the last one tonight.  The Tier V destroyers are many battles out, and I don't even want to think how many more battles I'll have to play to get a Tier V battleship or carrier.
The weekend events where they hand out free XP bonuses make a huge difference, and the occasional day of free premium status also can be a big help if you can actually play a lot during that window.  Last weekend, when they were running triple XP, I had several matches that paid out over 4k XP.
Of course, the best thing you can do to earn XP is to get into high tier battles, survive, win, and inflict tons of damage to as many enemy targets as possible.  Easy!