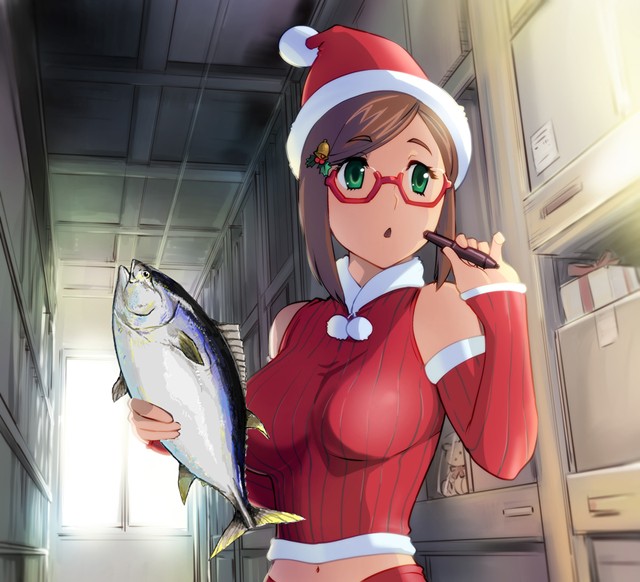 Okay, locally famous.  Locally known?  Not despised within the confines of this blog?  Whatever.  It's a whole post of the few Christmas tunes I can stand to hear after having to hear them over and Over and OVER at the Duck U Bookstore... and no schmaltz, either!  Let's get right into the musicing!

I'm not sure what it is about this song that makes me like it so much.  In the studio version of it, there's a minute of creepy-kid-spoken-word that comes out of nowhere and sounds really strange in the Bookstore.  This live version must be a work in progress, because it doesn't have all the lyrics I know.  Still, I really like it, and for the life of me, I couldn't remember who the performer was.  That's where our next song comes in!

I was doing research for this post (i.e., digging up youtube addresses) and as previously mentioned, couldn't figure out the artist of the previous song.  So, I hied myself to the Reddit.com subreddit called r/tipofmytongue and asked for help.  After about an hour, redditor Sheepcloner came up with it!  In return for his help, he asked, quite reasonably, for a facebook like for his band.  As I'm one of the few people in the country without a facebook account, I couldn't, but I DID like the song he linked to, and I include it here... with a plea for my readers to go to their facebook page and give unto them many likes!  I really do like their sound, and intend to listen to anything else available after I finish this post.  I keep expecting a Spaghetti Western to break out... Ennio Morricone would be proud.

Kay Starr - I've Got My Love To Keep Me Warm (remix)

Let's see... rockin' bassline, Hammond organ, horn section?  It's pretty much a "Make Wonderduck Like Us" delivery machine.  I first heard this version of the song a couple of years ago, on SiriusXM's "Ultrahip Xmas" channel, and it was literally the only track they played that I could listen to without throwing up.  Groovy.

C'mon, it's Brian frickin' Setzer, rockabilly guitar god, leading a big band... what part of this combination could possibly be considered bad?  Seriously, if all christmas music was like this, nobody would mind having to hear it for eight hours a day.

I've worked at the Duck U Bookstore for the past nine Christmases.  I've heard the instore play system's choices all that time, and quite honestly a lot of it is the same as it was then.  I seriously think that this year was the same as last year's selections.  Except a couple of weeks ago, this track came on, and I very nearly pulled a muscle from excitement.  My favorite band, groovin' out to Chuck Berry?  Baby, hurt me!

Arguably the best Christmas song to come out of the 1980s, it's an interesting story in and of itself.  An obscure punk band from Ohio known for the minor hit "I know what boys like" and the theme song to the TV show "Square Pegs" hit gold with this one, to the point where the song is reportedly a legend in the UK, and a staple here in the US.  Excellent stuff, this.

Oft voted as the best christmas song of all time in the UK and Ireland.  I don't rank it that high, but man is it good.  It's a damn shame that MacColl was killed in 2000; what with the success of Adele, how huge do you think Kirsty MacColl would be these days?

Chris Rea is a deeply devoted petrolhead, and a lot of his songs express his love for cars... even his christmas song does!  His voice makes this one; it wouldn't work without that gravely sound.  I'll admit that this track always makes me feel melancholy when I hear it... of course, the holiday season isn't my favorite time of year, but so it goes.

U2 - I Believe In Father Christmas

The original version of this song by Greg Lake was the first christmas song I ever went out of my way to purchase on 45.  And maxi-single cassette.  And CD single.  The bombast of it seems to fit with the season, yet the lyrics tell a drastically different story.  Then U2 got a hold of it back in 2008, and something special happened.  Bono went back to the way he sounded in the '80s and early '90s, The Edge lent his distinctive guitar sound to the melody, and the band as a whole seemed to regain the style that made them the biggest rock band of modern times... for one song, U2 had stopped being the parody of themselves they've become and returned to being U2.  It all went away, of course, but for 3:28, you can almost imagine they could record Sunday Bloody Sunday again.

The Bobs - All I Want For Christmas

Want to make Wonderduck cry?  Play this song.  It's my favorite christmas song, done by the best acapella band ever, with their best lineup ever.  It shamelessly reaches out to grab you by your feels and wrings them out.  It works.  Oh, it works so well.

1 Christmas Rapping is one of my favorites too.  If for no other reason than the line "A&P has provided me with the world's smallest Turkey"  Something about that mid-line rhyme...