Rio Rainbow Gate! ep10 We open Episode 10 of Rio Rainbow Gate! pretty much where we finished Episode 09, inside some Gate Holder's roll ruler... essentially their magical power.  Casino Island is deserted except for Rio and Dana, The Owner's magician, with no clue what's going on and no way to get out.  And then the Laser Weasels come. 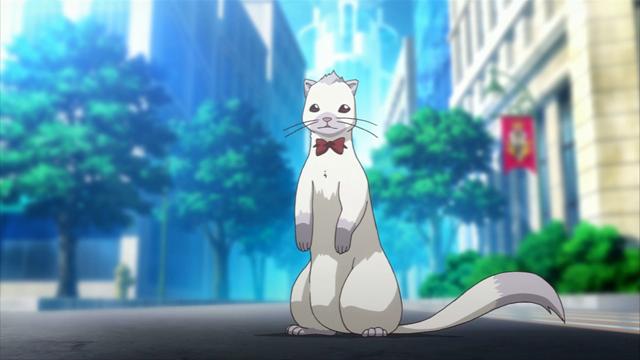 Instead of lasering up and turning Rio into a flaming pile of ash, the Laser Weasel begins running away.  What sort of Laser Weasel runs away?  He's a disgrace to the race is what he is... he's even wearing a frickin' bow tie!  Who would have ever thought there'd be such a thing as a Laser Weasel Nerd?  I'm so disappointed.  Rio and Dana follow the Laser Weasel, and he leads them right to the Casino. 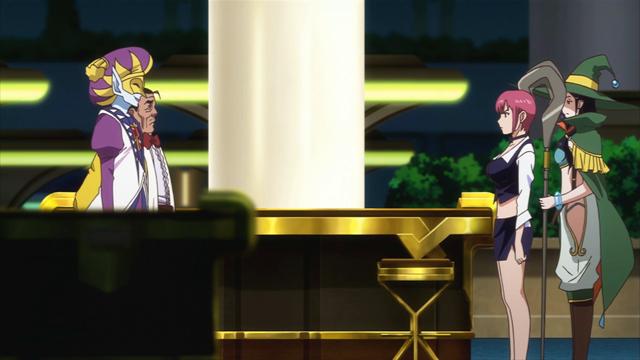 And in the casino?  The Owner, tied up, and some dork in a New Orleans-style Mardi Gras costume... who calls "him"self Joker.  I put "him" in quotes because while everybody is calling Joker "him", "his" voice is so obviously female that I'm wondering about the intelligence level of everybody involved in this scene.  Joker harangues Our Heroine and challenges her to a game of blackjack.  They both end up with the same score: a push.


Seventeen hands of blackjack later, we have seventeen more pushes.  This seems somewhat unlikely to occur in nature.  Rio, rationally, considers: One, probability is a factor which operates within natural forces. Two, probability is not operating as a factor.  Three, we are now held within un-, sub- or super-natural forces.  Discuss.  And indeed, Riocrantz is correct... Joker is controlling the game through "his" roll ruler power.  And there's absolutely nothing Rio can do about it. 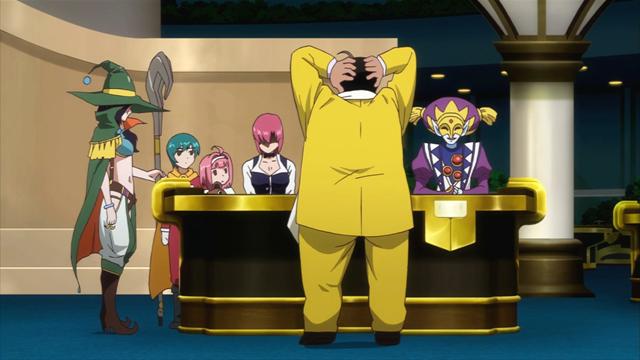 Just to hammer home this point, the pushes stop and Rio loses.  Over.  And over.  And over.  All the while, Joker is essentially calling Our Heroine a wimp and a "talented amateur," but no match for a real Dealer.  Lots of mumbo-jumbo is thrown around, but it all boiled down to this: Rio's power to make people happy and lucky is a passive one.  Rina's power, by comparison, is an active, offensive type, and that will always defeat a power like Rio's.  A wonderful life lesson there: you can only be a winner if you grab with both hands and take take take!  Making people happy is for losers.  I guess the Production Staff of RRG! would have to be considered "winners" then. 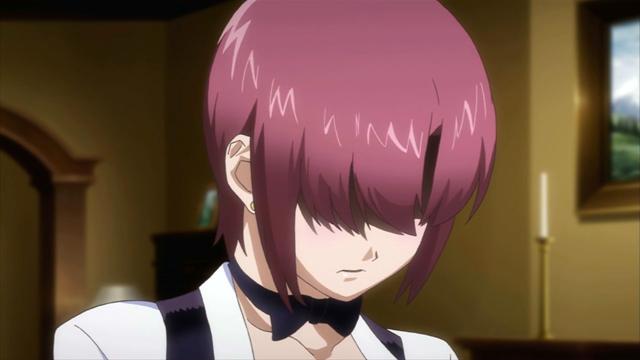 Rio sits quietly under this barrage of vitriol, then calls for the cards to be dealt.  Of course she wins with a natural blackjack.  Joker looks at her and asks if she plans to go on a winning streak now... Rio just stares at her with a confident look.  The next hand is dealt, but Rio's is a little different.  Her first card is... a Gate.  "You're worthy to face Rina," says Joker, and "his" roll ruler dissolves... revealing them to be in a crowded casino, with Joker nowhere to be seen. 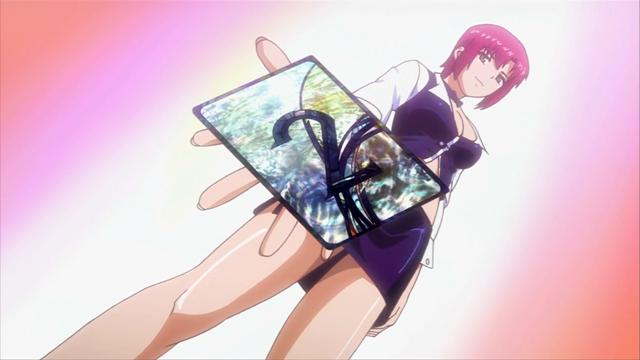 12 Gates are now in play: eleven for Rina, one in Rio's hands.  The thirteenth?  Nobody knows who holds that one... not even evil Cartia. 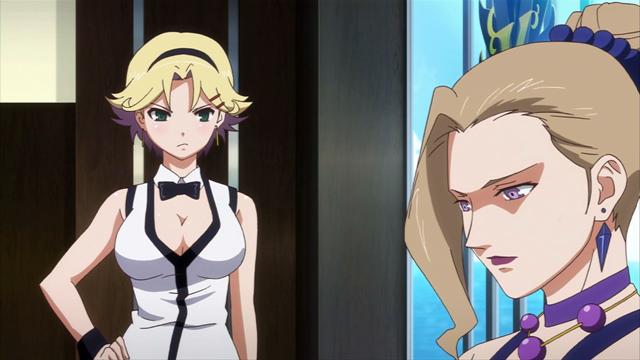 Speaking of whom, Rina is learning very fast just how much she's being manipulated.  This whole plan of evil Cartia's has nothing to do with her niece, it's all so she can "see the Rainbow," whatever that means.  When Rina calls her on it, evil Cartia just blows her off with a "shut up and do your job."  There's still two Gates out there, and Rina has to win them... as soon as they're located.  One is known to be on the Island, the other was last seen three years ago in the hands of some anonymous woman.  Not even the Casino Dealer's Guild knows who holds it, or where it is.  A disgruntled Rina stalks out.  At that same time, Rio enters Dana's bespoke theater in response to a message of some urgency.  When she gets there, a shock awaits her. 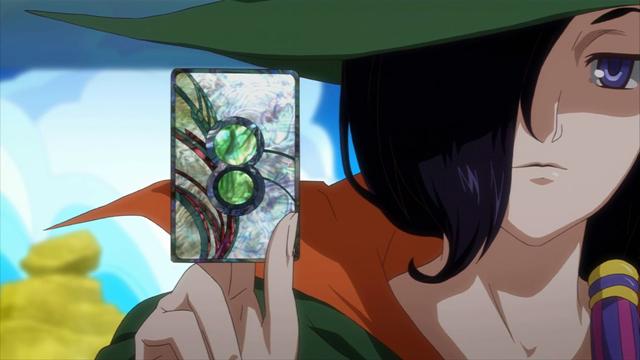 Zounds!  Dana is the mystery Gate Holder, and she's challenging Rio to a Gate Battle right here, right now!  At this moment, I need to do something I didn't think I'd ever manage: compliment the Production Staff.  All series long, Dana has been a background character, knowledgeable in the ways of the Casino and making spooky predictions of the future.  The past few episodes, however, they've casually made her more and more important, dragging her out of the background.  I probably should have seen this coming, but I didn't.  The reveal of Dana as Gate Holder came as a complete and effective surprise, one that was much better than dropping another random gambler into the mix as an opponent.  Good job, Production Staff.  Why couldn't you have put that much effort into the rest of the show? 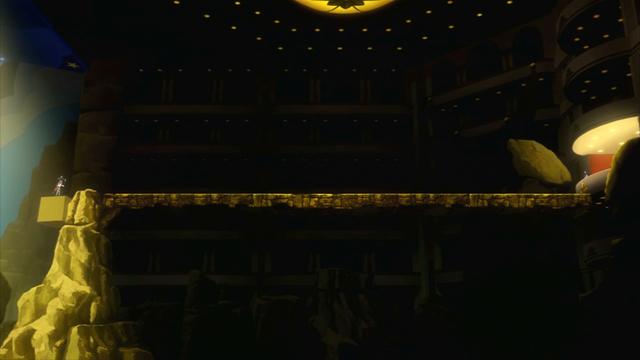 The contest is simple: Rio just has to cross this magical bridge.  If she accomplishes that, she gets the Gate.  How hard could it be? 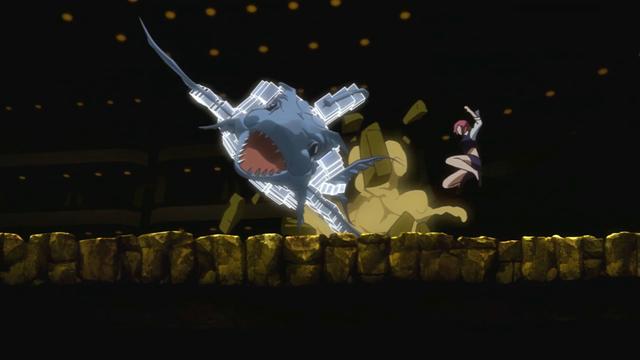 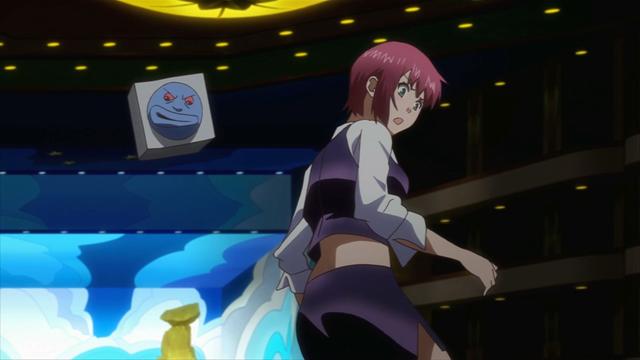 Angry Bit!  And not just any Angry Bit, but one that shoots clothes-destroying streams of spit.  Oh the humanity! 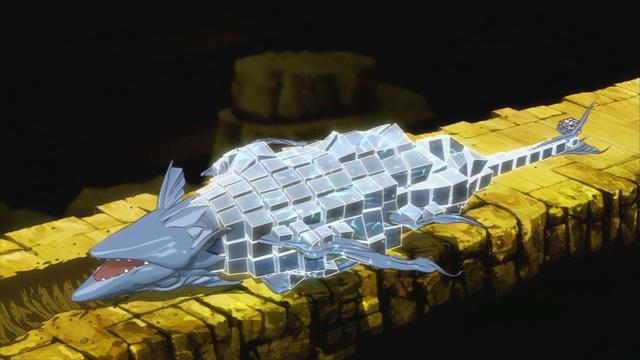 Eventually though, Rio's skill at Giant Holographic Flying Shark baiting and dexterity at evading clothes-destroying streams of spit renders these opponents impotent failures.  Alas, Rio is still mostly clothed.  C'mon Dana, get it together, we're counting on you! 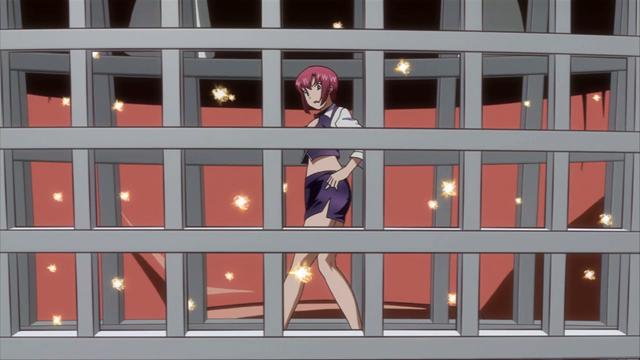 Wah-hey!  She's been caught in the cage of "Demon Prince Sitri."  In his hands, humans return to the form of their birth... meaning naked as a jaybird.  Each of those sparkly things?  Clothes-destroyers.  I'd be banging my head against my desk right now if I hadn't volunteered for this duty. 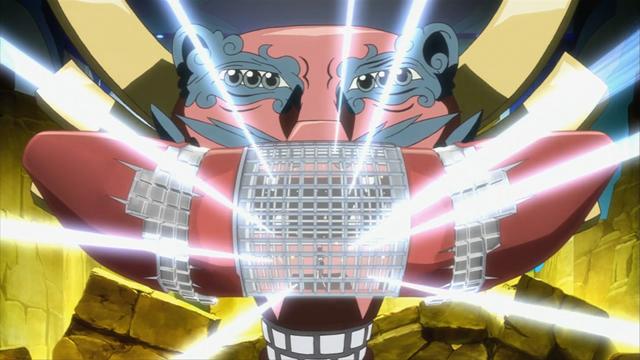 A blinding light fills the cage, then the theater... and then a flash that is even brighter washes out the screen. 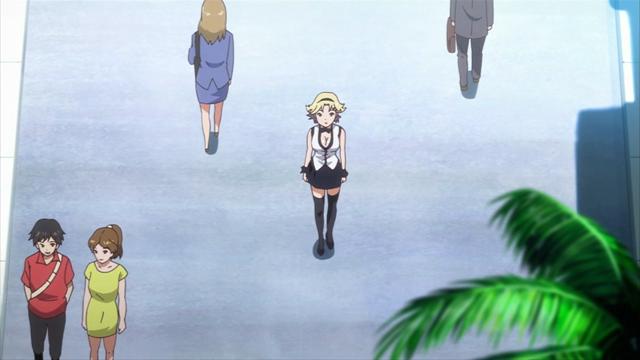 Simultaneously with this, a strolling Rina comes to a sudden halt.  "It's as if millions of poly-cotton blend fibers cried out in terror... and were suddenly silenced."  We could only hope, Rina, we could only hope. 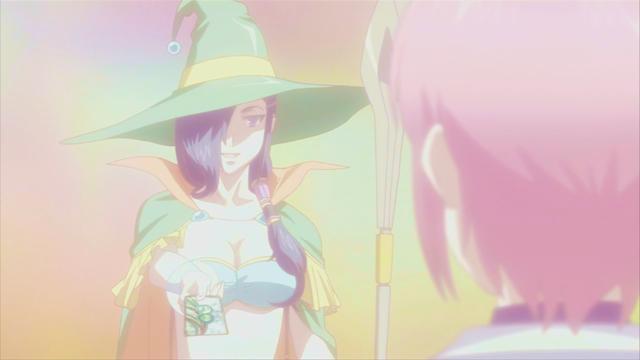 Back at the theater, Dana is handing her Gate to Rio.  Wait, what?  What just happened?  Seriously, RRG!, what occurred here?  It's never explained how Our Heroine escaped the clutches of the Demon Prince Sitri, either with or without clothes.  One moment, she's about to be nekkid, the next she's taking a Gate from Dana... I just don't understand.  Oh, wait, yes I do... it's RRG!, it doesn't have to be consistent, logical or even entertaining.  Got it.  It's my fault for expecting such things from such a lousy series. 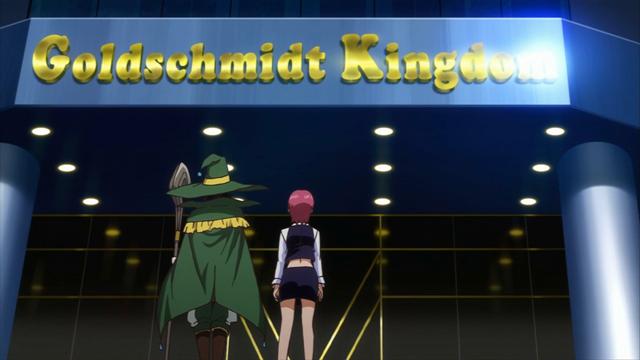 Jump cut to the front of The Owner's old Casino.  Rio is trying to work up the courage to step inside for what will be the final Gate Battle... particularly since neither the evil Cartia or Rina know she's a Gate Holder yet.  But then the Usual Suspects show up, intending to walk in with her and fleece the Casino at the tables for all they're worth.  Rio's 10 as opposed to Ocean's 11?  If only we could be so lucky. 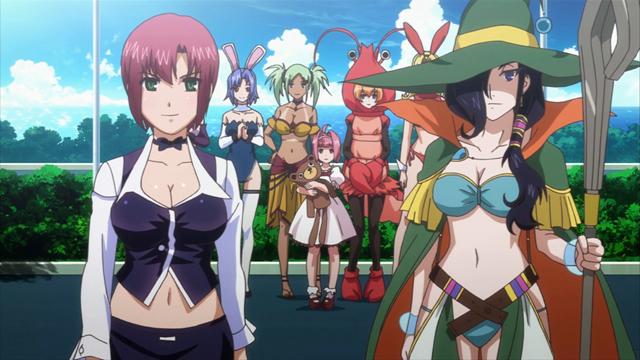 With a confident smirk on her face, they head towards the door.  And look!  The shrimp costume is back!  Oh yeah, this sh*t just got real.  Fade to black, roll credits.

On one hand, this was a great RRG! episode, full of goofy action, dramatic reveals and pleasant fanservice.  On the other hand however, it was hideously awful, with the entirety of the first half being spent on semi-spiritual mystical crepe that nearly put me to sleep.  The promotion of Dana to main secondary character was welcome as she's awfully fun to look at, but it also pointed out just how badly the Production Staff wasted her potential.  Meh, like I should have expected something else?

Next time, there's an infestation of magical girls!  What?  With three episodes left, they go and do that to us?  Haven't we suffered enough? 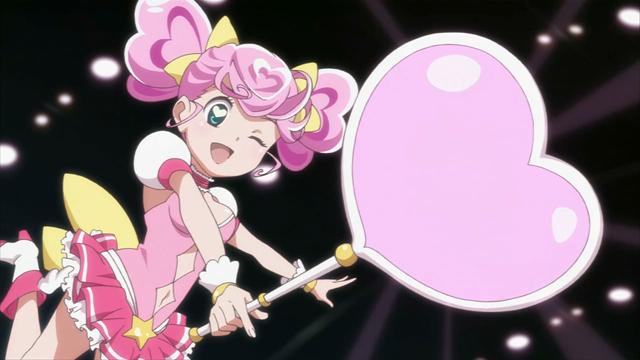 Why don't you have a seat right over there....

2 We're going into a final-boss battle with three more episodes left in the series. Are they really going to stretch it out that far, or is there something else coming after it?

My guess is that after Rio (presumably) wins, then we spend an episode finding out what the cards really mean and why anyone would want to own them all.

3 Based on what I've seen in Bleach, yes, it's possible to stretch out a final-boss battle for 3 episodes.  There's always time for flash-backs, action breaks for taunts and soliloquies, and the inevitable "You're stronger than I expected, now it's time to use my full power!" escalations.

4 I'm pretty sure that Ep11 is going to be filler, judging from the previews.  Even that should be entertaining, following the Usual Suspects as they try to run roughshod over the gambling tables... and Mint dresses up in armor for some reason.

So that gives us two episodes for the Boss fight... but I suspect the real boss is evil Cartia.  She'll surely barricade herself in her office and it'll take the combined powers of Dana, Mighty Jack, and love to get her out.

5 Yeah, Cartia hasn't quite divulged her entire evil yet, like how she's clearly been manipulating Rina.  Something shall be revealed, and rest assured it will be trite.

It still cracks me up that despite how awful this episode was, it was better than the last episode of Freezing, and though I can watch this series in all of its infinite retardation, I couldn't bring myself to watch any more of Infinite Stratos past episode four.

6 Wait, I don't even remember who Dana IS.

7 Beta Waffle says that a lot of the opponents are characters from video games which were produced by  the same company that owns the Rio property.

Dana, for example, is from a game called "Solomon's Key".

8 Actually, it might literally just be Jack and Dana who have been sourced from elsewhere. They're the only two the Japanese Wiki page for the show cites as originating from anything other than a Rio game, anyway (well, aside from Aniya being an original character for the drama CDs).

Saying that, I do think Bull Hard has a minor resemblance to a recurring enemy from the arcade version of Ninja Gaiden. (Yes, I've been thinking far too much about this).