Rio Rainbow Gate! ep07 Ladies and gentlemen, I have some disturbing news.  It has come to my attention that the anime known as Rio Rainbow Gate!, which we expected to be nothing more than a stupid fanservice vehicle, has instead been attempting to grow a plot.  While hard to believe, I'm afraid that it is also... true.  All attempts to prevent such a catastrophe from occurring have failed.  We have failed.  There is still some hope, however.  The plot, such as it is, is still small and weak, and there is every chance that it will die before it gets too much momentum.  However, for this episode at least, we must proceed with caution. 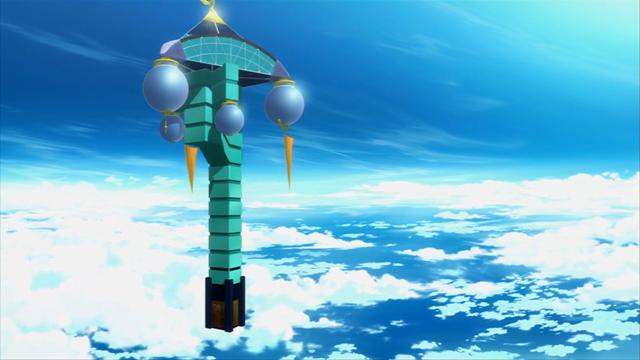 And then you're reminded that you're watching a show currently taking place in a Sky Resort flying 3000m above the surface of the earth, and suddenly threats like "a plot" don't seem so worrisome anymore.  In fact, today's episode of RRG! is taking place only two hours after the last one.  The evil Cartia is throwing another Gate Battle at Rio, something totally unprecedented in the realm of casino history.  Unsurprisingly, Rio is already exhausted from her fight with Mighty Jack, and is taking a nap in her room.  When she wakes, she has a surprise waiting for her... 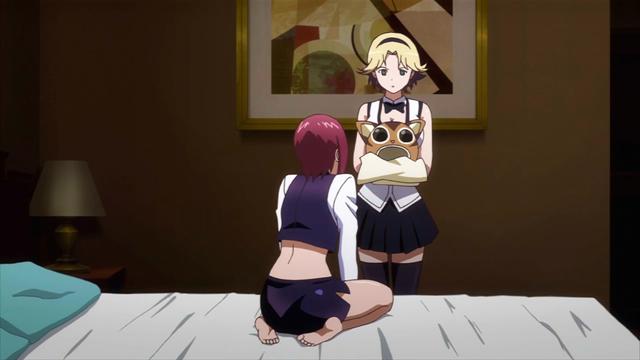 There are so many things that are just wrong about this screencap.  Wrong... but so, so very right too.  Rina actually says what the rest of us are thinking about the show's setup, declaring that these Gate Battles have stopped being fun casino games.  What, not every casino has a holodeck or a giant water park in them?  Still, a Gate Challenge is a Gate Challenge, and Rio has to suit up.  It's another target-shooting contest... at least that means no freakin' shrimp costume this time. 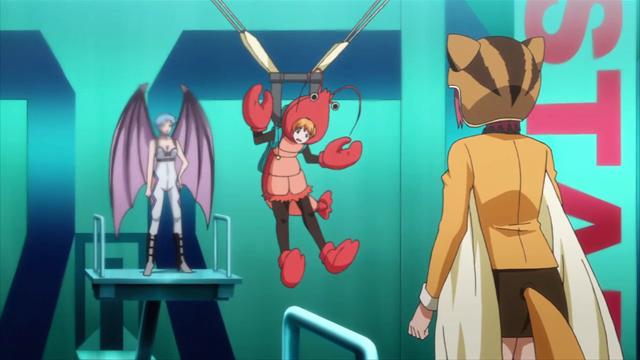 Oh.  Did I neglect to mention that this Gate Battle will be taking place in an indoor skydiving wind tunnel?  The contestants have to fly up the tunnel, shooting as many targets as possible while they do.  When one of the two reach the top of the 400 meter tunnel (what?  400 meters?  In a building flying 3000 meters in the air?  Just how big is this thing, anyway???), the duel ends and the one with the most targets hit wins. 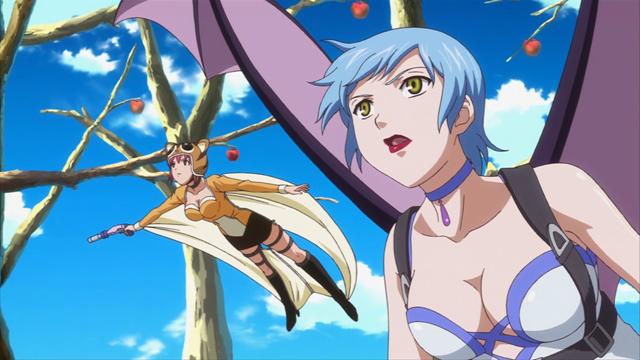 Oh, the tunnel is also a holodeck, which explains all the tree branches inside a freakin' wind tunnel.  At this point, I need to make a correction to something I said in last week's recap.  Then, I said that Rio was dressed as a flying squirrel... it turns out that isn't the case, as she's actually wearing a costume  of the Australian Sugar Glider.  We regret the error.  Rio's opponent is a ruthless sniper, named Queen, who isn't afraid of using her gun (which is harmless to humans) to shoot some of the holographic branches and have them fall on Our Hero.  Through a remarkable series of coincidences (which is also commented on by cast members... I think the production staff is jerking our chains again), Rio barely manages to defeat The Sniper, using her skill at thrown playing cards once her gun is broken.  Afterward, Rio nearly passes out from all the physical exertion. 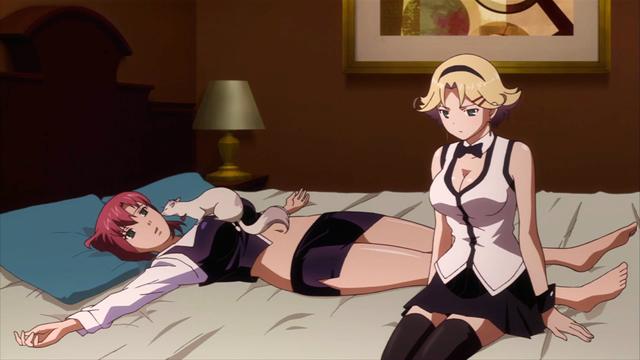 Of course, Rina is there to catch her.  She goes so far as to say that she'll protect Rio from anybody who'd cause her pain or suffering.  Sure doesn't look like anybody is suffering here... in fact, Rio looks awfully relaxed... if you get what I'm saying, and I think you do.  Anybody get the sense that the room probably smells like a brothel during Fleet Week?  A hot bath is just what they both need... 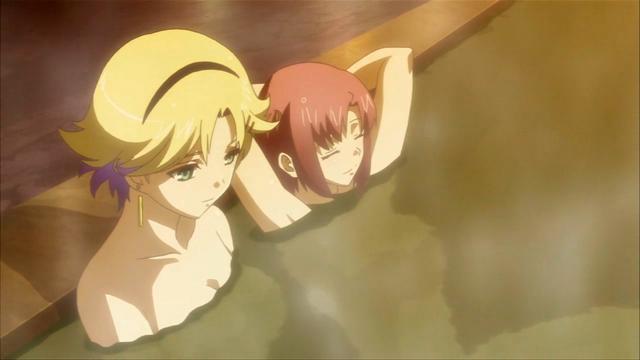 ...and the production staff Rina is only too happy to provide a reason to buy the DVDs.  Despite the comfy steaming water, Rio keeps thinking that there's someone watching her.  She's right of course... me.  I'm watching her.  I'm probably the only person watching, but there is someone.  I think I deserve the appearance of a rubber duckie in the next episode or two.  If that happens, then I know the production staff, realizing that I'm their audience, is reading this blog. 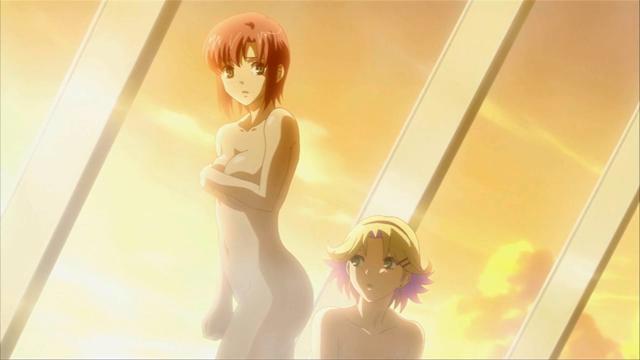 My guess?  Probably a jetliner going by, or maybe a quick-thinking news helicopter... after all, those aren't one-way windows behind them there!  Rina is getting even more concerned for her childhood friend's wellbeing... could she be breaking under the stress of the Gate Battles? 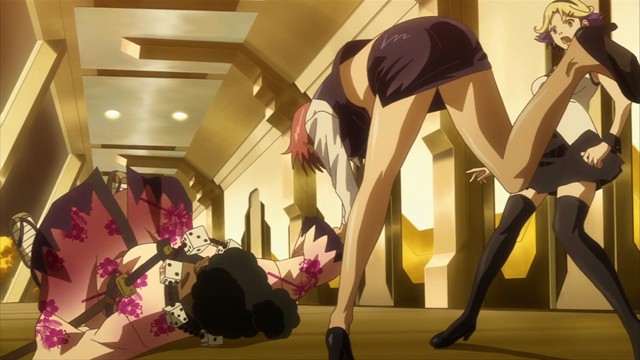 When Afro Samurai appears after the bath, Rio assaults him, displaying the martial arts skillz she displayed way back in Ep01.  Rina decides drastic measures are called for.  She reserves the main holodeck (the same one used in the Space Pinball battle last episode), takes Rio there and tells her that what she needs is some soothing landscapes.  Rio, touched by this kindness, smiles while Rina runs up to the control room. 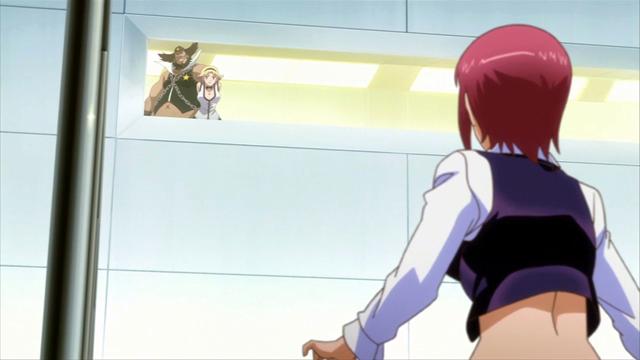 Dun-dun-duhhhhhhhhhhhhn!  When will protagonists learn that nothing good will ever happen in a holodeck?  I mean, look at Star Trek TNG... how many episodes involved something bad occurring in the holodeck that threatens to take over the Enterprise?  Why would a show like RRG! be any different?  Rio tries to run... 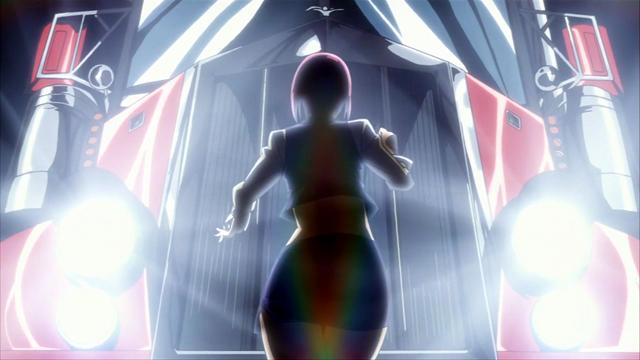 ...and is suddenly caught in a bad Steven King short story.  Cars come racing at her from every direction in some bizarre human-scaled game of Frogger.  She manages to avoid them all, but not without some difficulty.  When she stops to catch her breath the turtle she's standing on sinks into the water and she loses one life the ground beneath her feet falls away, sending her plummeting into a hell of molten lava.  At which point, the one thing I've truly been expecting since around Ep03 occurs: 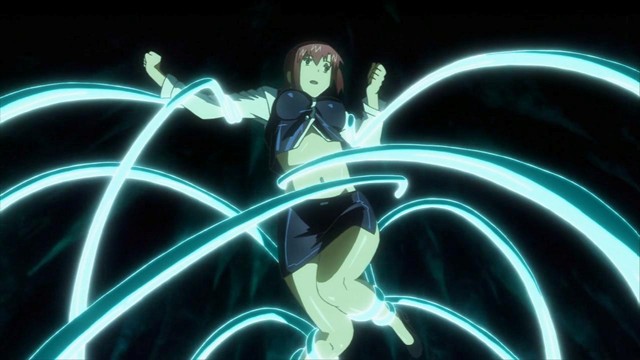 YAY TENTACLES!  I really want to see the omake for this show now, just to see what they do with this episode.  With a heartfelt "yuck," Rio is eaten by the monster and passes out.  If only I could be so lucky, but alas I have remained awake and coherent throughout this entire episode. 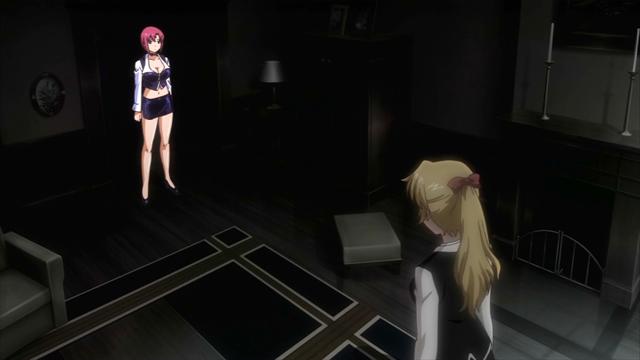 Upon awakening, she's... home?  And her mother, the legendary Risa Rollins herself, the only dealer to have ever held all 13 Gates, the mother that mysteriously disappeared some years ago, is facing her.  Much to her dismay and grief, the image of her mother begins to harangue Rio about how she just brings pain to everybody around her... "everyone you ever love leaves you... like me."  "And me," says the image of... Rina?  "I hate you, Rio, just leave," says not-Rina as she and Risa fade away.   Meanwhile, we learn that the evil Cartia is the person providing the Gates to her champions (like Queen and Mighty Jack), and nobody knows how many of them she has.  Jack's hacking of Linda last episode has also taken over the guidance system for the Sky Resort, and it apparently won't land until Rio loses a Gate Battle. 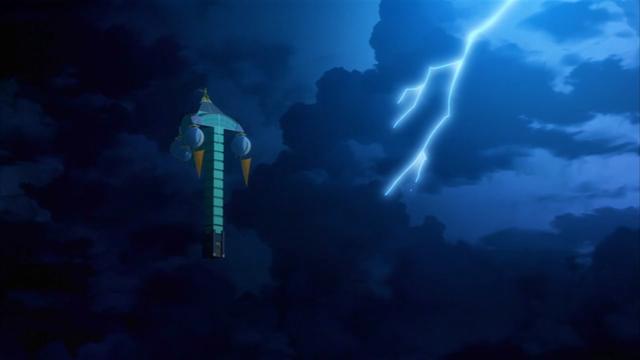 Okay, if this is heading the way I think it is, I'm gonna be pissed off next episode.  There were a lot of hints about it in this one, things that you can't get from reading a recap, but I have this sinking feeling that Rina is going to have a heel turn in Ep08, and say it's for Rio's benefit.  After all, she's doing it for Rio's own good... look at how exhausted and twitchy she's been!  But who else would know as much about Rio's childhood as to make a convincing hologram program that refers to things that only Rina and Rio would know about (and that I didn't mention)?  Further, I'll predict that the evil Cartia will turn out to be Risa Rollins in disguise and/or heavy makeup, for what reasons I don't know or understand.

I suspect the production staff doesn't know or understand either.

I've found that I really like Rina as a character, certainly more than I do Rio, and if she goes bad for such a lame-arse reason, I'm going to be very displeased.  Stay tuned. 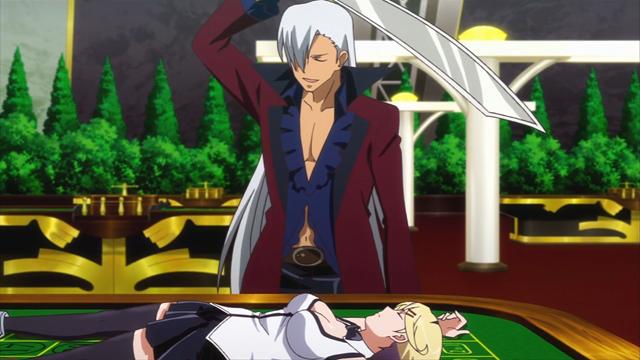 Next episode: Rio faces off against King Strong Arm... with Rina as the prize.  I wish I were making this up.

Iâ€™ve discovered that the way to watch this show is savor the attempts at rational explanations for the disturbing inanity and insanity that the majority of the characters exhibit.  Like why would Howard constantly bet his casino on gate battles with a rival whose compatriots are guilty of assault, kidnapping, cyber vandalism, hijacking, reckless endangerment, and general poor sportsmanship without making any apparent counter bet?  If you said â€œmarketingâ€, youâ€™re right on!  That and his brain has probably been eaten away by syphilis.

Which is also why he lets his file server with loosely attached, easily hackable head wander about the casino and mingle with customers rather than keeping her locked in a secure server closet.  Marketing and syphilis.

2 Wah, you've got the right of it.  It's a very stupid series, but once in a while something brilliant drips out, like the whole Sugar Glider thing.  Though I'll disagree with you on one thing... there has always been a counterbet: the challenger's Gate.

Sure, you might argue that the entire Casino Island and Rio's four Gates vs one Gate is a little lopsided, but what the hey, that's what the show is for.

Oh, and the shrimp costume.

And the implied yuri.  Can't forget that.

I'm watching her.  I'm probably the only person watching, but there is someone.

It's nice to see someone with a purpose.

Rio serves the same purpose in the entertainment world as the movies that appeared on MST3K. Â The anime itself might be crap, but these episode reviews are hilarious.