Returning For A Visit Why does the internet go insane?  Every now and again, something will grab the attention of The Web and, for a couple-three weeks or so become kinda obsessed with it.  Usually the item at the center of attention is among the stupider things one could think of.  But occasionally, the internet sets its sights on something that's actually kinda interesting.
Last year, the town of Jackson Hole Wyoming became internet famous when a live-streaming webcam focused on the "town square" was inundated by visiting yootoobers.  Apparently, one of the troglodytes that inhabits 4chan posted in that den of iniquity something to the effect that there was going to be something interesting occurring at such-and-such a time.  Of course, some ridiculous number of people showed up to watch whatever it was... I don't even know if the something even happened or not... but then something strange happened.  People kept visiting.  And visiting.  And visiting.  Then the mainstream media "discovered" the story, and then there was another surge of visitors.  At any time, there could be upwards of 3000 - 4000 watching. 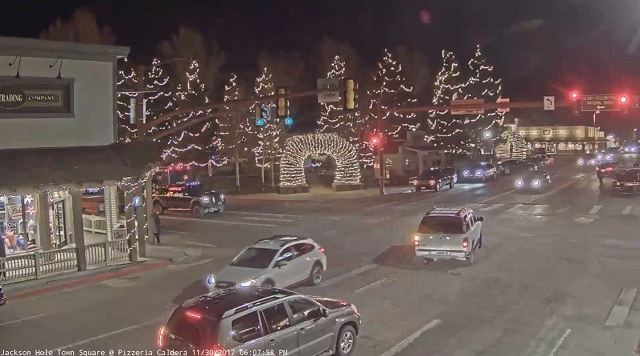 Amazingly, a complex backstory arose... or maybe not that amazing, this being the internet and all.  The Arch, centered in the above picture, became a mythological... almost religious... thing.  One spoke of The Arch in reverent tones, its wonders to perceive.  For example, The Arch was the bringer of the new day, which was signaled by the stop lights shifting from normal to flashing red.  The Arch must also be fed, accomplished by people... well... walking through The Arch.  Om nom nom.  But the best known reaction would have to be "RED TRUCK." 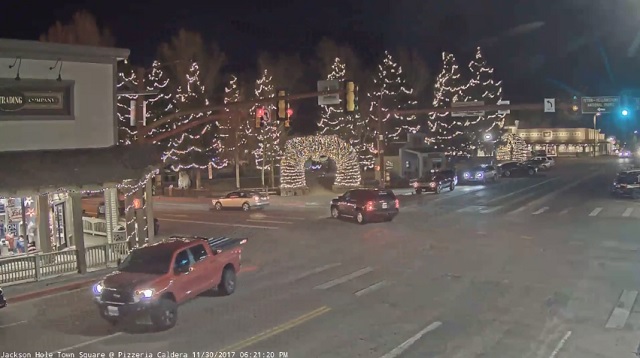 This is Wyoming.  The pickup truck may as well be the state bird.  Most of them, however, are black.  Or silver.  Or some neutral color like that.  I imagine that, the first time, there had been a parade of pickup trucks, all alike... and then came a splash of color among the utilitarian blacks and silvers.  "Red Truck," someone pointed out in chat, and it stuck.  Lemme tell ya though... I was actually watching one time when a red 18-wheeler drove through the intersection, and it was like all the important figures of every human religion ever suddenly appeared and did a Rockettes number in the center of the square.  Good times, good times.
In the end, however, the appeal of the webcam died off, people went away, and things returned to normal... except there's always been a couple hundred viewers hanging around.  A couple of nights ago, I found myself visiting the webcam for the first time in a half-year at least.  It felt like I was the only one who remembered those times, as I had to explain what The Blessed Arch was, and the Red Truck, and... and...
Why did we do it?  Was it the voyeur in all of us, watching without being watched ourselves?  Was it an attempt to be a part of something both unique and mundane?  Was it to connect with others watching as well?  Did we want to see something peaceful?  Or was it just The Internet being The Internet again?   I don't know.  I will probably never know.  But I will be going back.
The yootoob livecam can be found here.

1 I visited briefly last year.  Maybe I'll see you there!

2 There's an entire sociology research paper hiding in all this, about how we build communities and the impulses & mechanisms at work in our brains.

3 There's a paper or two in Eve Online, that's for sure. The way the economy emerged, the wars, etc. The dev team didn't plan any of that.

4 Maybe it's just because that's a really pretty scene.  People like things that are beautiful and pleasant to look at.  /shrug