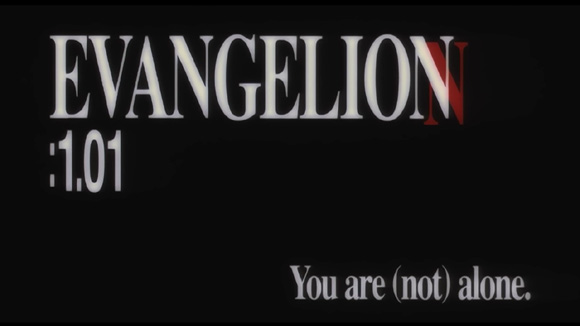 WARNING: the extended entry has 25 screencaps, and is emphatically NOT safe for dialup.
Was it worth it?  In a word, "yes." 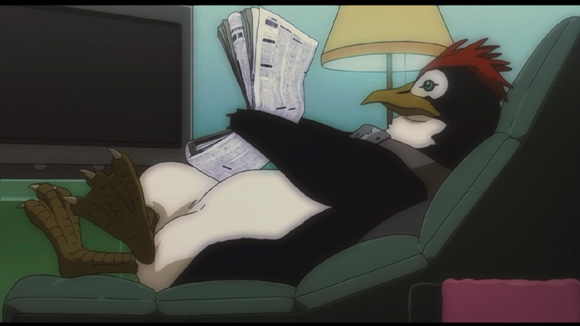 Okay, so you want more than just one word.  How about "in all facets, yes," does that grab you?  I'm completely serious: this movie (and the next three, if they're as good) may be the definitive Evangelion.  Quite honestly, I'm not a big fan of the show.  Yes, it's a good example of what anime can be, but that can be taken a number of ways... none of the characters are sympathetic, our "hero" is a top-flight whiner, the plot is so convoluted that you can't figure it out, even WITH the book, the ending (any of them) is a complete disaster, and on and on. 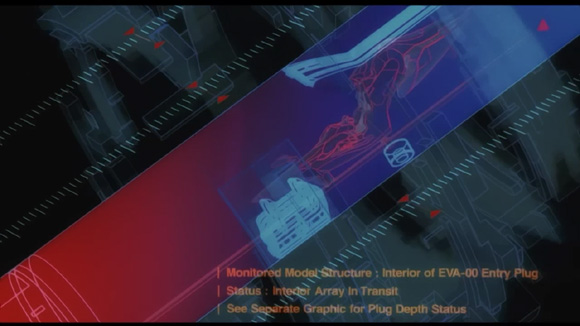 The movie takes the first six episodes, distills them to the essence of Eva (which turns out to be pretty good that way), and puts a HUGE graphical upgrade on top of the show.  When Gainax first started working on Evangelion 13 years ago, CG was either unheard of or had just started to be used; either way, Gainax didn't have it.  They also didn't have a gigantic budget; the movies have both.  As a result, it's flat-out beautiful.  How beautiful? 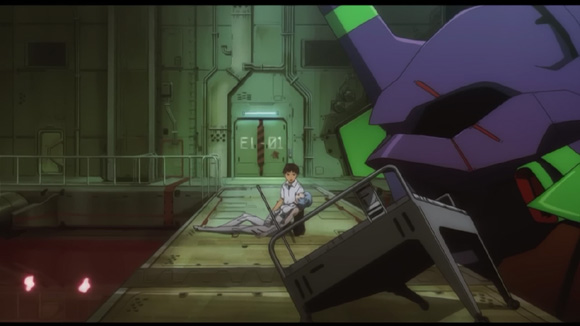 It's an ugly scene: the first Angel we encounter is beating the crap out of Tokyo-3, Shinji is beginning to show the epic-level angst he's famous for, and Rei has been called out of hospital to pilot Eva-01.  Suddenly, the place rocks from impact damage, Rei is catapulted out of her gurney, Shinji cradles her and finds her multiple wounds have reopened, covering his hand with blood.  He comes to a decision to pilot the Beast, and we get the above shot.

But enough of that... how does it stack up against the TV show directly?  Let's take a look!  The screencaps of the series, which will be the first of each pair, come from ADV's "Platinum Edition" thinpak boxset release, the caps of the movie comes from a 1280x720 mkv (I apologize to the fansubbing team, I've lost your org's name).  As much as is possible, I've matched scene for scene, and the only processing I've done to the screencaps was to reduce them to 580px wide, 300dpi, and .jpg using Photoshop 7.

First up: Gendo is watching the test of Eva-00 (the one that ends up with the Eva beating it's head against the wall). 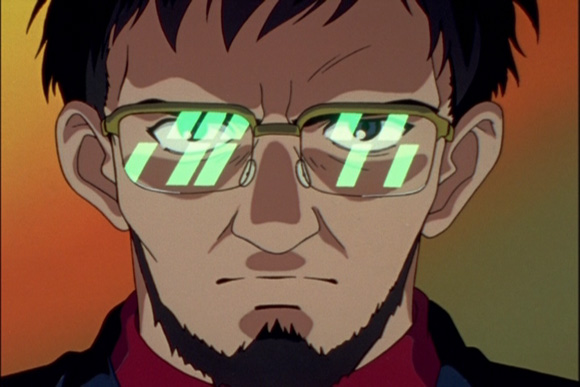 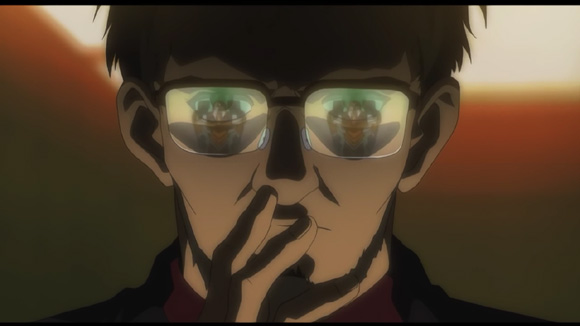 A lot more detail in the movie version, that's for sure.

Next, Shinji in the cockpit of Eva-01, watching his father speak to Rei: 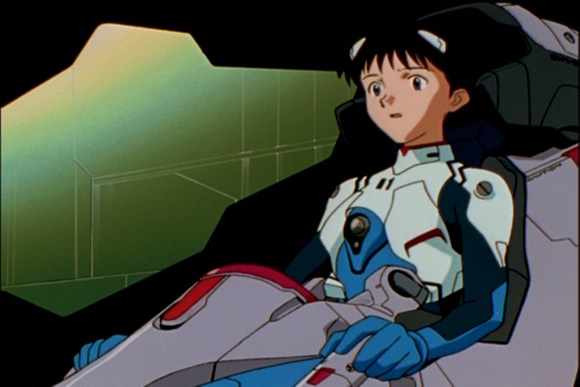 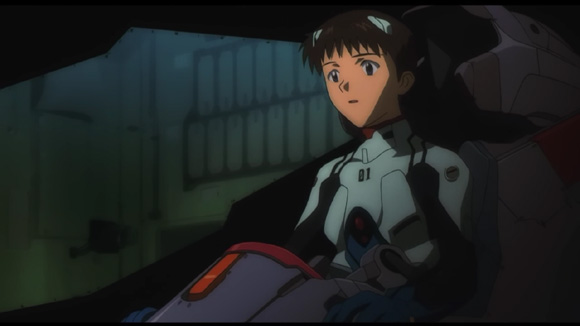 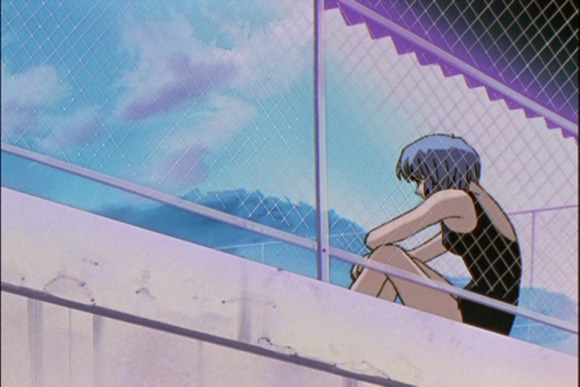 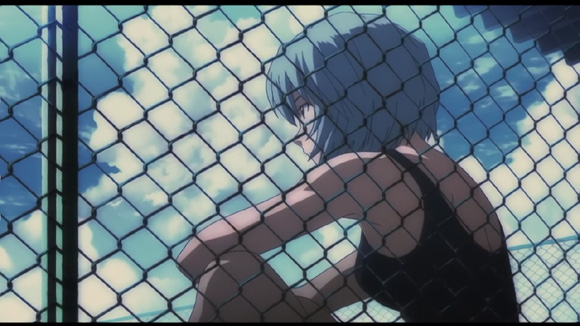 Shinji camps a spawn point and backshots the second Angel we see: 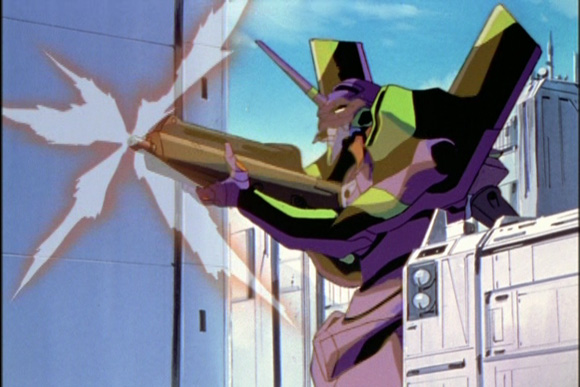 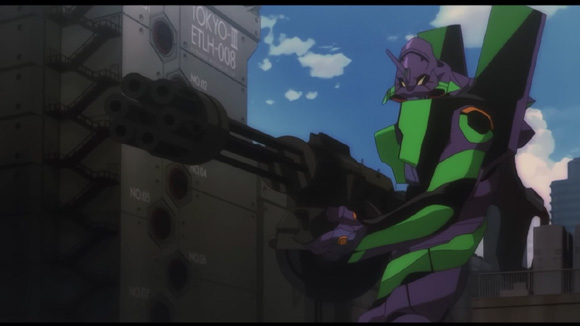 ...and it's the Evas and the Angels where the movie really blows the anime out of the water. 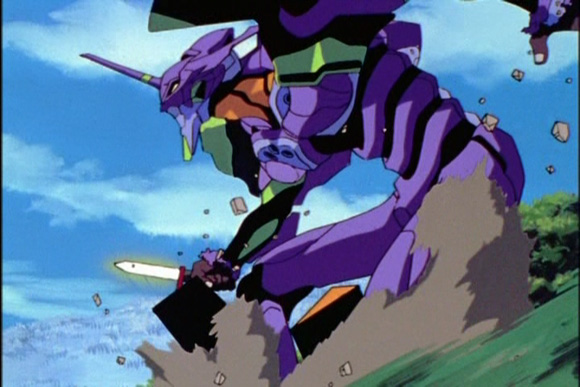 Obviously, CG gave Gainax the ability to make things more realistic.  Eva-01 is amazing in its own right, but the difference in the background is what makes the shot for me... and the clouds move.

Speaking of Angels, here's Shinji getting a gastric bypass from one: 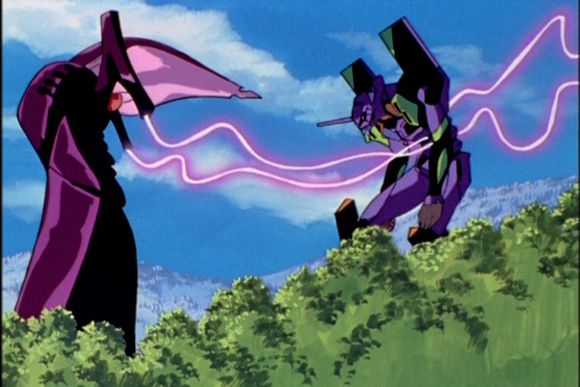 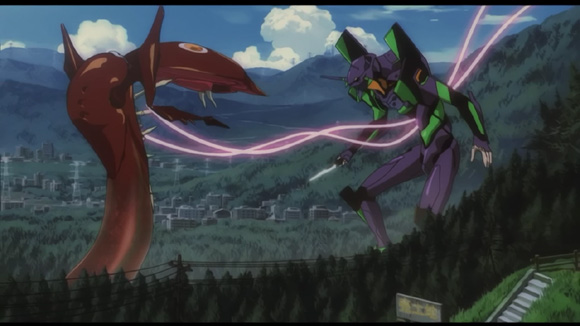 The Angel in the top shot looks cartoony, and it's "tentacles" are going under Eva-01's arm, not through its gut.  In the movie, though...

You had to know it was coming: Shinji walks into Rei's apartment, just as she comes out of the shower: 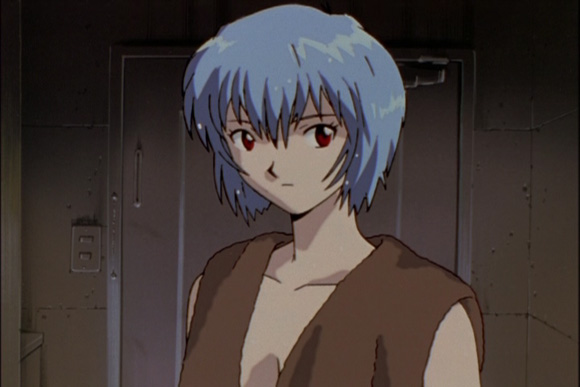 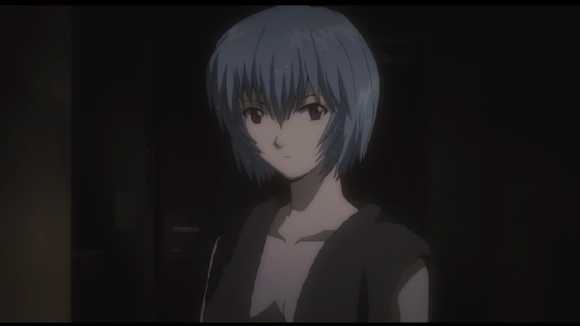 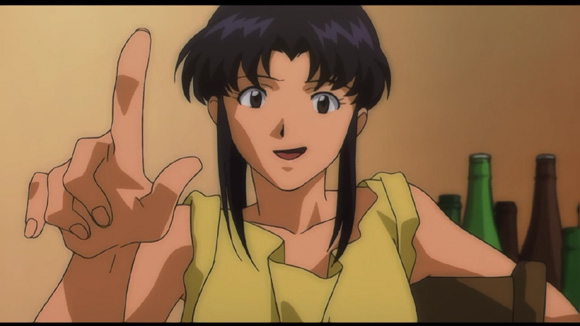 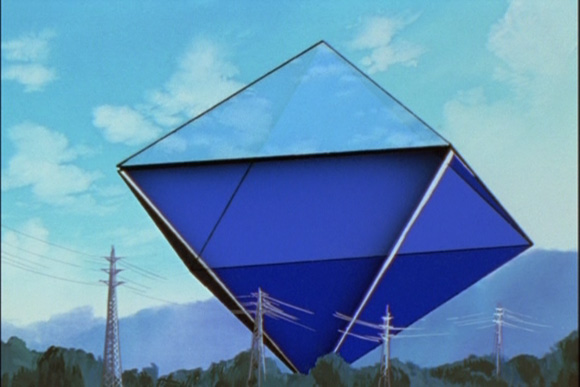 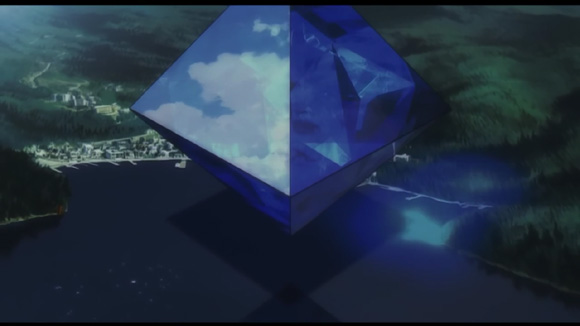 Really, this Angel is where the movie truly shines.  In the TV, it fires its all-powerful beamspam attack from one of the apexes of the cube.  In the movie, though, it does this:

...and fires from the four glowing red spots, ala the Death Star cannon.  Shinji is not pleased by this development. 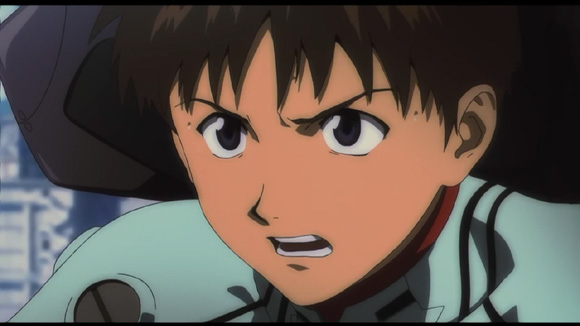 KANEDAAAAAAA!!! (sorry, I couldn't resist.)
Finally, the famous shot at the end of ep06 of Rei smiling: 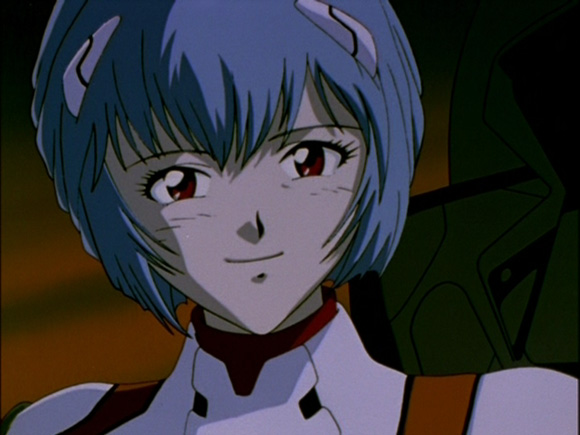 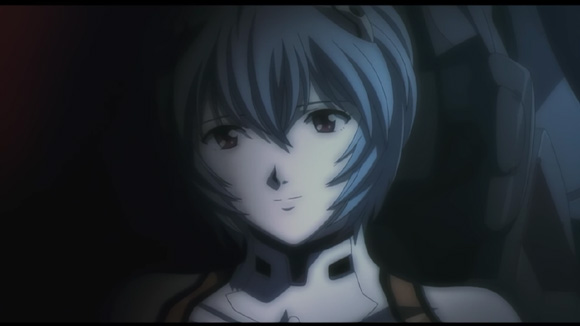 The full-size version of this screencap is currently my computer's wallpaper.  It's stunning in its detail.

If you're an Evangelion fan, you don't need me to say it, but SEE THIS MOVIE.  If you hated the anime, and I don't blame you one bit, stay away, because it's more of the same, just prettier.

If you're in-between, however, I'd suggest giving it a watch.  The way Gainax has condensed the show so far (jamming six episodes into the timespan of three) has, for example, taken out a lot of the things that made Shinji truly annoying... they just don't have the time to linger on his angsting so much.

While I own the Evangelion series, I've only watched it all the way through twice (and only once since I purchased the Platinum Collection almost three years ago; I borrowed it from the President of the Duck U. Anime Club the first time), and generally have no desire to watch it again.  Yes, it's impressive, but... *shrug*.  The movie, though, is making me think that the series shouldn't've been 26 episodes the first time.

If you've never seen Evangelion, trust me: this is definitely the way to do it. When it's released here in the US, it'll surely be in high-def... which might drive me to get a TV that does HD.  Yeah, it's just that good-looking.

Okay, you've been good.... here's some Misato fanservice for you: 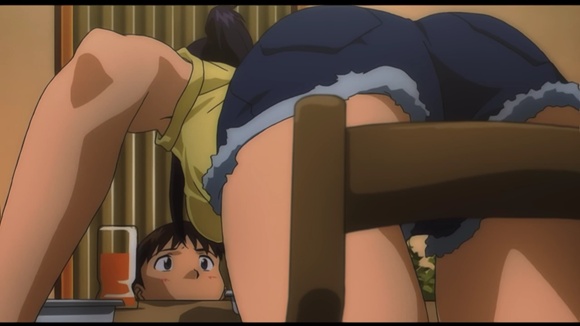 ...and yes, the toothpick scene is still in the movie, too.  I could have done without that.