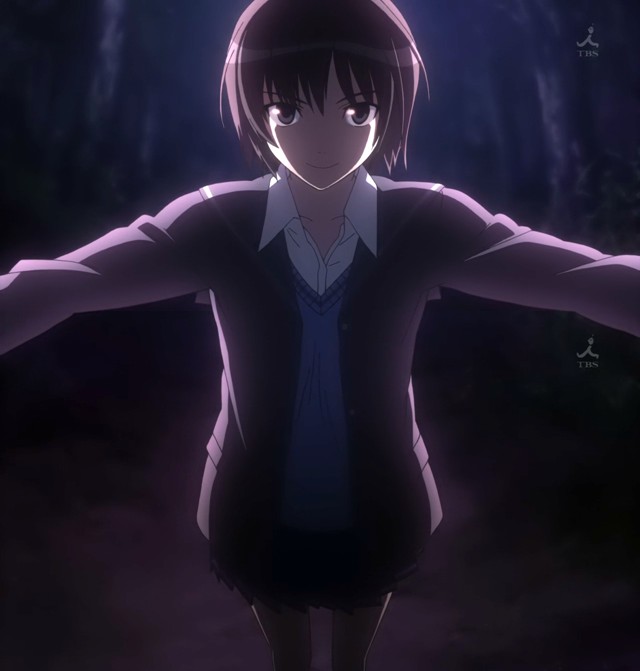 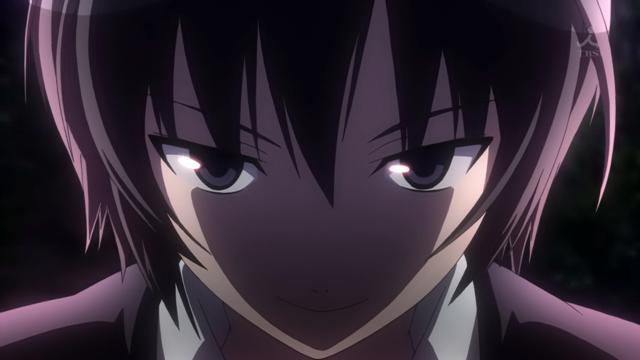 Your body is never found...

Ai is great; I'm actually thinking of doing an entire post devoted to expounding upon her wonderfulness...

1 Yeah, I bet there's a billhook in EACH HAND or something, right?

2 Is the missing mouth and nose in the second frame some sort of anime shorthand--a dramatic variant of the facefault, perhaps?  Or is it just an error in the animation?  (Maybe one of the inbetweeners was asleep at the switch.)  She does look quite creepy in that second frame, and even in the first frame there's something wierd about her expression.  I'm guessing this character is the resident psycho-girl/yanderekko of the series.

4 Peter, would you believe that you're about as far off as it's possible to be on your guess about Ai's personality?

Of course, I'm cheating... these are from a "fantasy" sequence.

5 "Peter, would you believe that you're about as far off as it's possible to be on your guess about Ai's personality?"

Actually, I'm kinda glad to hear that; I never understood the recent popularity of bunny-boiler characters in anime.

Would you recommend Amagami SS to someone who may be considering getting back into Japanese animation?  I liked Azumanga Daioh back in the day, and Hidamari Sketch is tempting me now; is this series cut from the same cloth?

6 Peter, I have to admit that I wouldn't recommend Amagami SS to someone thinking to get back into anime.  Oh, don't get me wrong, I'm liking it quite a bit, but it's not your normal type of show.

Y'see, it's based on a dating sim, which isn't so unusual.  Most anime with that sort of background (like Kanon or Kimikiss Pure Rouge) choose one girl to be the target of the protagonist (Ayu in Kanon, Mao in Kimikiss), while the others hover around in supporting roles.  Usually that's fine, though in Clannad most fans wanted someone other than Nagisa (indeed, Tomoyo and Kyou each got OVAs where they wound up with Tomoya).

With Amagami SS though, it was like the producers couldn't decide on which of the girls should be the main one... so instead, they "reset" every four episodes and shift to a different girl.  Each of the six girls gets a four-episode miniseries, in effect.  It's interesting, and I really like it, but the slice-of-life harem show is pretty much my favorite genre of anime.

No, if you're a fan of AzuDai and you want to get back into anime with something similar, you'd be silly if you went with anything other than the HidaSketch franchise which you've already said you're tempted by.  Another good show might be Sketchbook ~full colors~, though I'd rate HidaSketch above it.

If you are thinking of getting back into anime, you should try To Aru Kagaku no Railgun.

In some ways it's the same as AzuDaioh: vivid and engaging characters, well portrayed, showing how they live, and how they grow up over the course of the series. Also, not a lot of fan service.

In some ways it's not the same: not entirely comedy (thought there is some) a fair amount of violence. And some of the girls have super powers, particularly Mikoto, the titular "Railgun".

Definitely try the first episode, at least. It's well written to be a good, general introduction to the scenario and the characters. I bet you get hooked.

8 IMHO, GA: Geijutsuka Art Design Class is a significantly better anime than Hidamari, which I tried to follow twice, quit after 5 or 6 episodes (did not even try Hoshimitsu, I know it's the same thing all over again). Yunocci is adorable, but generally it's completely Shafted to death. Sketchbook is also weak. I made a supreme effort to stay with it, but honestly I'd rather watch wide faces. But, as J said once, "On the whole, I prefer DearS. They didn’t get a second season. Girls Bravo did. Such is life." Hidamari got ZnT's extension treatment, so it must've been popular on the street.

Reading what Steven writes about the Railgun franchize, the impression left is of a rather nasty business. I dropped Index after 2 episodes, it was the same police state horror as Railgun, but also terribly borring. I think he's getting into the same recommend-ones-fave fallacy here.

Yes, I'm afraid that the similarities between Railgun and AzuDai stop at the fact that they're both anime.  I like Railgun, but for someone who's just trying to get back into the medium after liking AzuDai?  No, not very much at all.

Speaking of "recommend-one's-fave-fallacy," Pete's recommendation for GA falls into that category, I believe... either that or he's just trolling, as he says the same thing anytime HidaSketch is brought up here.  HidaSketch holds a special place in my heart because of the duckie, but I'll be the first to admit that it's not the greatest thing in the world.

But it IS signifigantly better than GA, in that it's less about being an art class and more about being entertainment.  If you want to learn about additive color theory and the CMYK color model, GA is the show for you.

But if you want to have fun watching an anime?  HidaSketch would be my suggestion between the two.

10 So, you admit it's because of the duckie, right? Seriously though, I think the Yuno's delirium in S1 ep.4 or 5 was done very well. Too bad Shaft never returned to such hights thereafter. Not even Yoshinoya On Stage could save it.

11 Oh! There is one part of Hidamari Hoshimitsu that intrigues me though, in words of Aroduc: "Yuno flushes her key down the toilet and then spends most of the next week as a hobo, wandering from room to room, trading sex for lodging".

12 I actually quite liked GA. It's a similar flavor, but the GA students are art students who are interested in art; the artistic aspect is mostly incidental to Hidamari. I think GA's a little closer to Azumanga; every last character in Hidamari is nice-if-odd, whereas both GA and Azu have their jerks, lending it a dose of reality.

Honestly, I dunno, Pete. Our tastes in anime are similar in some respects and radically different in others, so I can't really say "I enjoyed this and you should watch it too". (I think a big part of that is that I'm absolutely, completely jaded by this point, so the presence of stuff that's probably pretty horrifying doesn't auto-DQ stuff for me. For example, I'm getting a kick out of OreImo this season, despite the premise...)

13 IIRC, nobody in GA:GADC is what I would qualify as a "jerk" in the same way Tomo Takino is. The only character who has unpleasant personality faults is Sasamoto-sensei, who has a strain of Yukari-sensei. And even then she's only lazy. Sotoma-sensei is quick to anger and drinks coffee. Usami-sensei is ditzy. They don't have anyone in Kimura-sensei's league. As for Tomokane, she is not close to Tomo at all. She is energetic without nastiness. If she spills a washbacket over Kisaragi's painting, she only does it in a fit of excitement. I cannot imagine her setting friends up for a broken vending machine, like Tomo did.

14 Not interested in discussing GA here, do it on your own blog Pete.