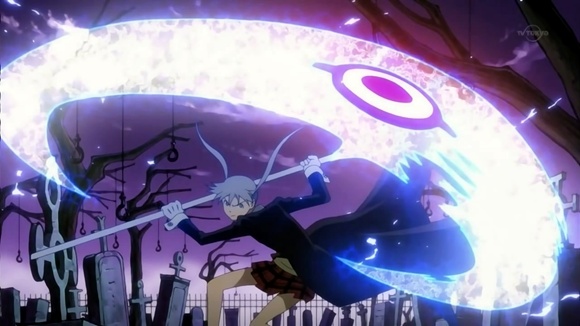 Best show of the season.  No question about it.

1 I know I've had a tendency towards fanservice series lately, but I seem to be alone in dissing this show and Daughter of 20 Faces. I'm getting worried I might have done another Gurren Lagann.   What's the show's appeal?

That guy in Houston dissed it. That makes it automatically kewel.

3 Seriously, it is a surreal show with a jarring and garrish art style and that is a turn off for a lot of people.

I like it because it is delightfully manic. It's not terribly fanservicy (word?) but it does look like it is going to be a lot of fun

4 I just wonder if they're going to be able to keep the joke going for 50 episodes.

5 Steven, I just found out about the 51-episode length, and it surprised me.  However, upon reflection, it really doesn't.  For all the action in the show, the first six episodes really didn't tell any story at all, it just introduced characters.

And that realization surprised the heck out of me; the storytellers have done a very good job of masking that fact.

It wasn't until ep07 that they introduced an antagonist, and she's not even a major one.

If they keep up the storytelling quality of the first six eps, they won't have any problem at all.  Yes, the art style is distinctive, and that will turn off a lot of people, but this duck isn't one of them.  In fact, I rather like it.

Ubu, you ask about the appeal.  The same as for any show: the characters.

6 I was surprised to find out how much I am enjoying this series so far.  Normally, I loathe dark anime, and despite the humor, this gives all indications of being a very dark series.  Up to this point I've given any series in which the plot contains the word "Shinigami" an automatic pass.

It doesn't yet seem to have any of the hallmarks of a great series, but it so far has been at least a good one.  I don't know if I'd call the characters a selling point; while I enjoy Maka, BlackStar causes me to cringe every time he opens his mouth.  The series has been fairly well plotted, at least so far, with the action scenes being exciting and story driven.  The setting, while distinctive, is odd enough that I can see why some people would dislike the series because of it.

7 The dark theme and the art style are still enough to keep me from watching this. Sorry, just not my cuppa. More power to you, though.

8 It's not the art style that throws me, I actually like it.   I just felt the first episode was a little too predictable. And her daddy was a major negative.

Now, having watched Kureni and Daughter of Twenty Faces through episodes 4 each, I'm willing to entertain that I might have made errors there.  Kureni is dark and gritty, and they've got a backstory that's being rolled out slowly.   I can't tell at all where it's going -- could be tragic, could be uplifting.  (Could the OP be more mismatched?  Yes, I've seen DE:MC.)

Daughter of Twenty Faces is a bit more predictable, especially as the OP and ED give away a major series spoiler.  On the other hand, a character I didn't expect is recurring, and I think there's going to be a reckoning somewhere... and I am so looking forward to it.