Random Anime Picture #50: I Call It A Teaser For A Reason 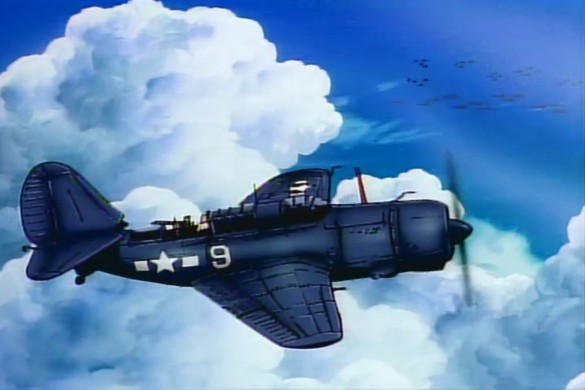 Say what you want about Leiji Matsumoto (and I will!), but he does do "fetishistic detail" very well....  One of the least-loved planes of WWII, the SB2C "Helldiver" earned every bit of its nickname: "Son of a Bitch, 2nd Class".  It was big, unmanueverable, underpowered, and a handful to fly.  Worse yet,  in its first iteration it was actually banned from dive bombing due to structural weakness.

On the plus side, though, it was fast enough to keep up with escorting fighters, carried a bombload almost twice that of the plane it replaced, the Dauntless, had a heavier armament and a longer range.  Eventually, over 7000 copies of "The Beast" were built.

It barely appears in The Cockpit ep02; it takes longer to read this post than it's on screen.