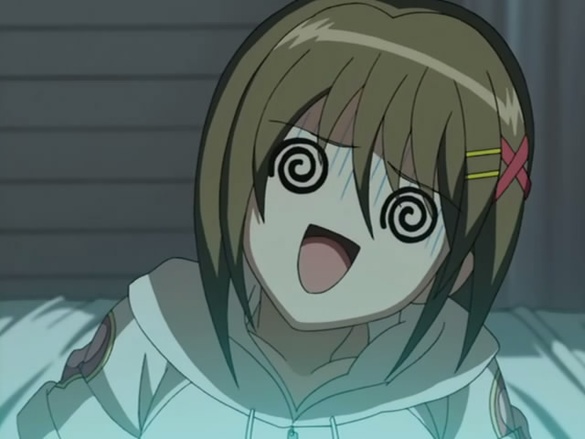 The whole Nanoha franchise is pretty darn fantastic (yes, even StrikerS... I don't care if it was more or less universally panned), but A's might be the best of the three series.  This is the first time I've seen it, and it's just blowing me away at every turn.

Nanoha's and Fate's transformations are a little creepy, though...

1 I guess you could say that the transformations are better in StrikerS.

Contrary to apparently everyone else, I actually prefer StrikerS over the first two seasons. But Hayate is awesome regardless. :3

2 Yeah, their powered-up transformation sequences are at least 100% more lolicon than anything in the first season.  Thankfully, they only play that one time, IIRC.  Glad you're enjoying the show otherwise.  I'm one of those that didn't much care for StrikerS, but the first two seasons are two of my favorite shows.

3 Am I the only one bothered by the fact that anime eye-spirals always have the same handedness, rather being mirror-images?

4 Refugee, please don't take this the wrong way, but I think I'm on fairly safe ground when I say "yep, it's just you."

If you think about it, though, why would contra-rotating eye-spirals (there's a phrase I never imagined I'd type) be any better?  It's not like there's real-life source material to draw from.

5 Refugee may be on to something....do eye spirals change their handedness south of the equator?

6 Eyes themselves have handedness, why shouldn't the spirals?

I think I'm bothered because the contrast with anime's usually faithful adherence to real-life anatomy and physics is so striking....