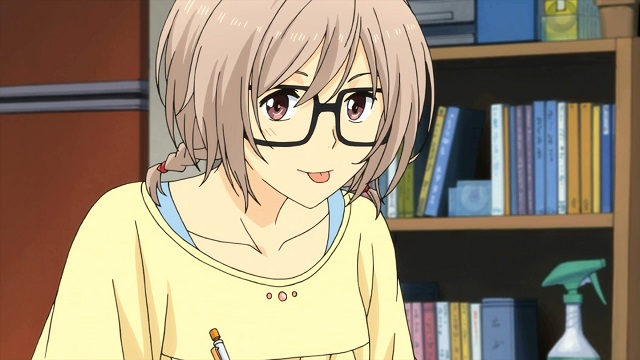 -ReLife, Ep06
Review inbound once I finish the series, but initial reaction is "I did not expect this to be that good."  Because I did not expect ReLife to be this good at all.

1 Episode 6?  Either this was a really long week (rather than just feeling that way) or they've decided to try targeting the Netflix binge-watcher audience.  Either way, this is one of the shows I had on my shortlist to try this season.

3 Ben, it never even occurred to me to doubt that it's girl. Why would you think otherwise?

4 Pixy, in a fit of either brilliance or stupidity, Lumpyroll decided to release ReLife all at once, instead of one episode per week.  It's quite available on the usual Yarrrrrr! sites, too.

Ben, it is very girl.  The goings-on in the next scene confirm it without a shadow of a doubt.

5 Steven, something about the face.  It just screamed "trap" to me.

6 Having watched the whole thing (perfect fare for a wintry Sunday afternoon) it is pretty good, but big warning: It doesn't so much end as stop.  And they've covered about 80% of the available material, so there's not likely to be a second season until at least 2018.

7 Crunchy didn't release everything in a batch for free users. The 13 is scheduled to come online in September.

BTW, I'm not a big fan of An. She jokes too much. Reminds me of Setsuna from Shingu. But she does not have the excuse that Setsuna enjoys. It is tolerable, I saw worse - like Iroha in Oregairu (SNAFU). But eh...

8 Pete, I didn't say anything about free users, did I?

9 One pleasant surprise about ReLIFE was how much and where exactly they chose to deviate from the manga. We are dealing with a competent adaptation here, folks. Possibly at the level of 2006 Kanon.