Random Anime Picture #113: The Smile That Sank A Thousand Abyssals 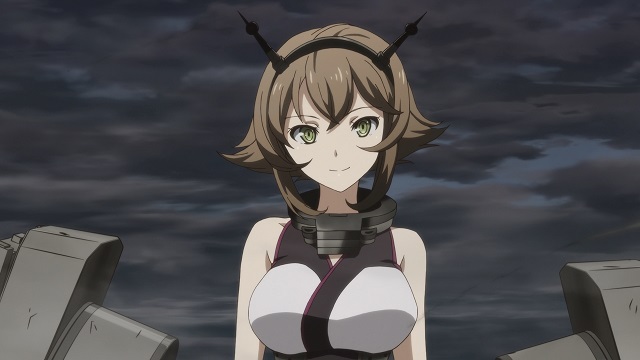 -Kantai Collection, Ep12
Because everybody needs more Mutsu in their lives.

To be fair, however: if Mutsu hadn't've been there to keep my morale up during the Kancolle writeups... 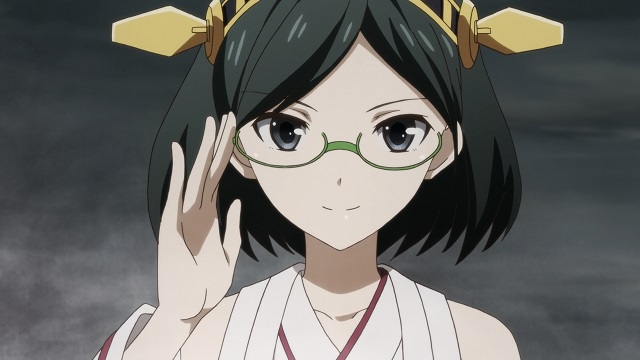 ...Kirishima would have done quite nicely.  Just sayin'.

1 KanColle, the anime, was made up of pretty and interesting characters (mostly) doing absolutely ridiculous things. It was fun to look at, anyway.

The whole "Ships as girls" mecha-musume concept just didn't work for me for this show. It was handled slightly better for Arpeggio of Blue Steel, however, IMHO.

They never gave us any hints about what the Fog were, where they came from, or why they were doing what they were doing, so that wasn't any good. But the ships with Mental Models worked for me, especially since they were quite varied, and kept changing the more contact they had with humans.

And I liked their version of Kirishima (a teddy bear) better. This Kirishima is just another big-busted lady pretty much indistinguishable from all the others.

3 The whole point of KanColle is the character design.  While I was hoping the anime would add more story than it did, it certainly translated the ship girls faithfully and beautifully.   Everybody can find their own favorite.  I'm partial to Nagato, Kongo and Haruna, myself.

4 Just like Fate/Stay, the real fun is seeing what fans do with the characters. There's a ton of 'em, they've got just enough personality to hook something onto, and the plot is thin enough that you don't have to worry about "well, when in the war is this happening?"

I've seen anything from detailed technical explanations of what the ships used to be and how they fought, to Northern Princess used as a kind of mittened Yotsuba, to character studies dealing with alcoholism, to cries de couer from game-players who've had things go wrong one (hundred) too many times. Abyssals show up to attack the base, to infiltrate and impersonate people, or just to hit the ice cream shop. The German ships show up and hilarity ensues. The marriage system is, of course, a popular topic. So is Akagi's appetite...

I've even seen a few that tried to explain, why Kancolle? Putting together an explanation that explains abyssals, ship girls, fairies, the compass, and all that ain't easy.

5 The only plausible explanation for something like this is The Rule of Cool, and the Rule of Sexy.