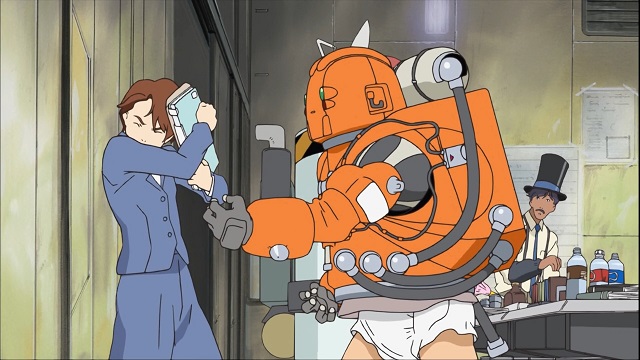 -Planetes Ep01
Because even in the future, astronauts wear diapers.  And top hats.

1 There's an anime question for you, Wonderduck:  what did you think of the ending of Planetes?

I've never seen the series before, I finished the first three episodes last night.  I saw a list recently of the "10 best older anime" or some such (2004 is old?  groan!), and it was right near the top.  I figured, hey, why not?  And here I am.

3 In that case, I look forward to your views, and I will refrain from spoilers!

4 I don't watch nearly as much anime as you, but I think Planetes is my personal favorite of all the series I've watched.  Of course, I'm predisposed to like it because I love hard sci-fi, so your mileage may vary.

And that's what makes horse races. I watched about five episodes of the series and dropped it, because it just wasn't doing anything for me.

6 I watched Planetes when it was airing (I may even have been participating in and/or running the forum back then) and I liked it well enough but wandered away before the ending. Like many shows, it's on my "if I'm ever bored enough to go through the backlog of all the things I should re-watch some day" list.

7 It's a fascinating series. Starting around ep 9, they make small changes to the OP, reflecting what the viewer now knows; the ED has a gradual change as well, but that mainly serves to highlight a subtle series-long joke.