Otakus... *facepalm* As most of you know, I am generally proud to call myself an otaku, in the English sense of the word (and, possibly, the Japanese sense, too... YMMV).  But there are moments where the antics of other otakus (otaki?) make me just want to crawl under a rock and hide. 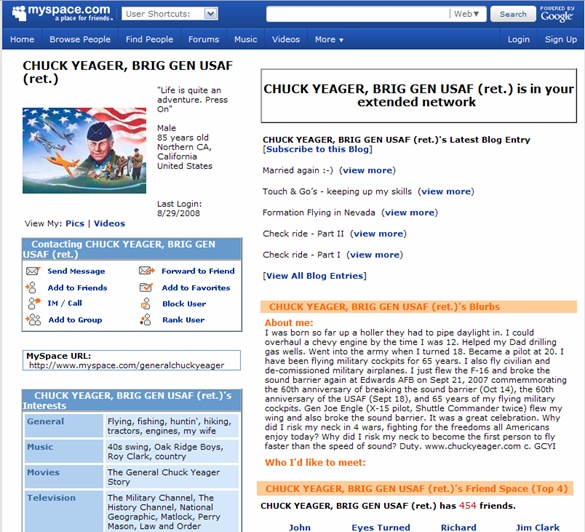 Okay, it's Chuck Yeager's myspace page, cool!  Real American Hero, no question about it... now, is it really him?  I dunno, but I could believe it easily enough, so let's just assume it is.  Now, if you scroll down a little bit to the comment section, the first bunch all seem like the usual hero stuff: "Thank you for being an inspiration to me," and things like that. 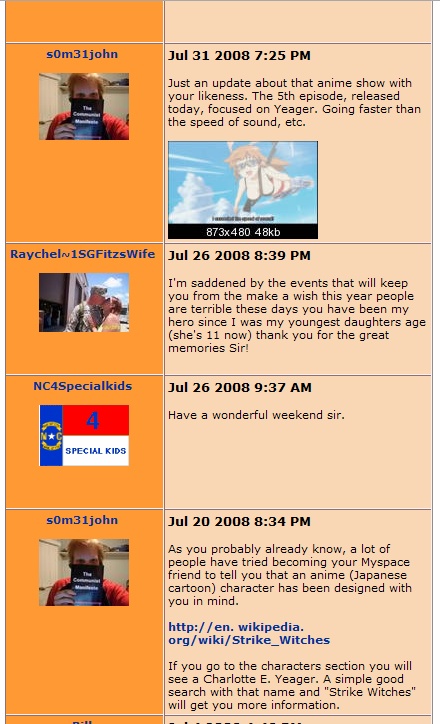 Thank you, Mr Otaku With The Communist Manifesto In Front Of Your Face.  I'm now going to go find a rock, and after I beat you over the head with said rock, I'm going to hide under it.

1 In my more cynical moments, I sometimes think that this whole "anime" thing is really an enormous psychological warfare campaign, with the Japanese bent on messing up an entire generation of American teenagers. Stuff like this makes me think that they really are doing that, and that they may be succeeding.

2 But what about all the messed up codgers, like me?

3 Trust me, any damage to American psyches is purely collateral. It's definitely a self-inflicted operation to them...