On The 'L' So a few nights ago I get a steam message from friend Ben from the mysteriously named Midnite Tease, who really needs to blog some more.  "I'm working on a modeling project," the aforementioned Ben says, "do you know anything interesting about Chicago's El?"  After sending him a few links that I knew of, I did a little bit of digging myself... just for the 'L' of it.
Yes, I'm sorry.  And yes, 'L' is the correct abbreviation, including the little quote marks.  Leastwise, that's how the CTA does it, and if anybody knows, it's them.  Anyway, since "anything interesting" covers a lot of ground, here's some cool pictures I've found along the way.
Diamonds Are Forever 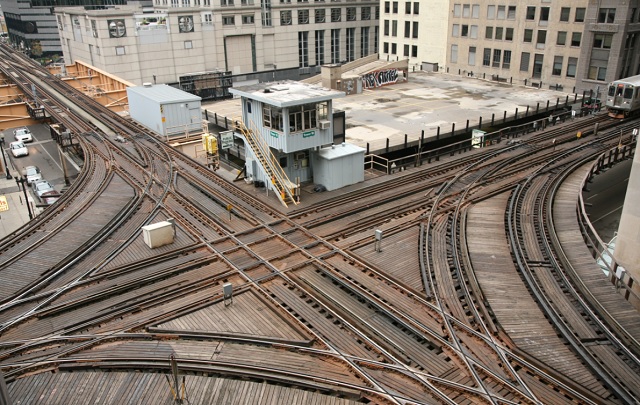 Down in the Loop, Tower 18 is the control point for the confluence of five different routes, or "lines" as they're called in Chicago: the North-South running Brown and Purple lines, the East-West Pink and Green, and the Orange line, which runs to Midway Airport.  Railroad diamonds scare me... they seem like magic.  Solid tracks crossing each other without the trains derailing?  I don't see it.
We Can Build It! 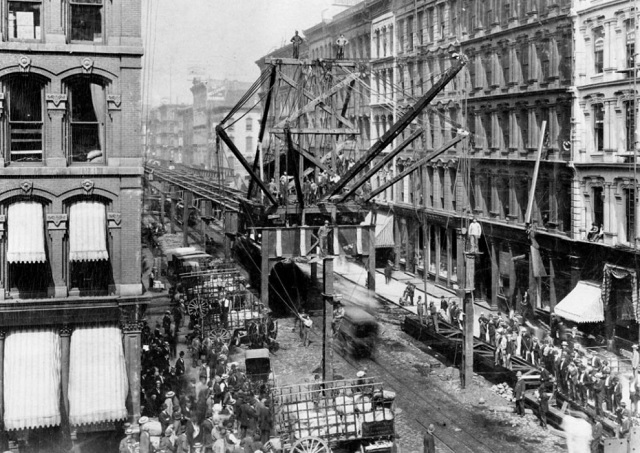 1908, and what would eventually be called the 'L' has been in use in one form or another for nearly 20 years.  Mostly it was ground-level rail then, and it pretty much didn't go downtown at all due to obtuse trackage rights problems, but once those got figured out (i.e., enough bribes were passed around) some bright spark had the idea to not clog the streets.  So they called out the heavy machinery, which I really hope was called "The Spider", because c'mon look at it, and began building.  Chicago can really build things, y'know that?
Unscheduled Stop 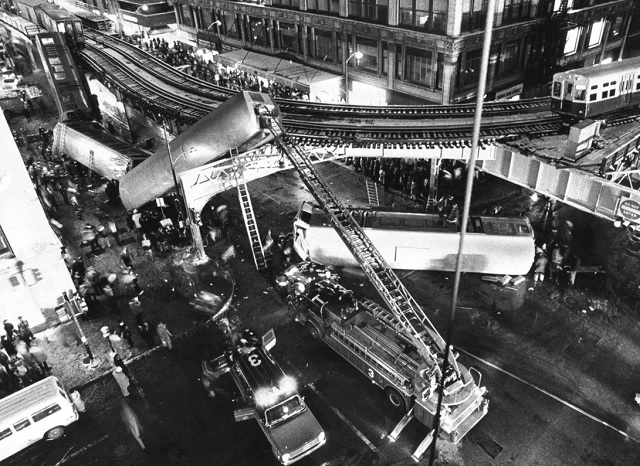 February 4th, 1977.  Due to a routing problem and an engineer smoking weed on the job, one 'L' train bumped into the back of another at low speed.  The engineer, sitting at the other end of the train, continued to apply power until, inevitably, some of the cars jackknifed and derailed.  One of the special problems you get with elevated tracks is that when you get a derailment, it's generally a Very Bad Thing.  Two cars ended up on the ground, a third stopped only by a support, and a fourth (in the upper left-hand corner) dangling from the station at Randolph and Washington.  Two died, something like 177 were injured.  I vaguely remember this happening, as Momzerduck and I had only just moved from the Chicago area to Duckford.  It scared me as a young waterfowl... "trains that I rode on crashed!  It could have been me!"  I was a simple duck back then.  A different angle of the aftermath can be found here.
Art Or Something Like It 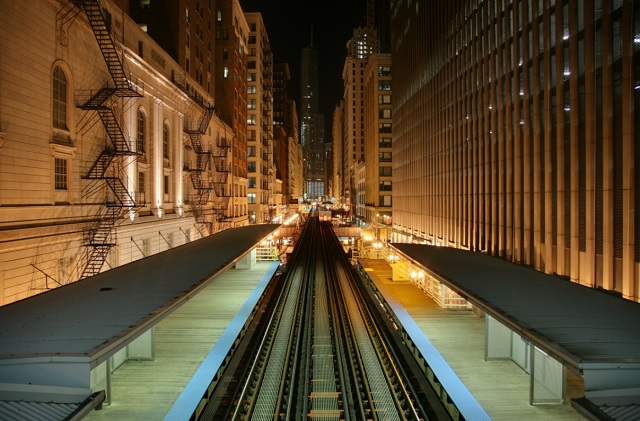 Sometimes utilitarian objects can be beautiful with the right lighting.  Adams and Wabash Station, butting right up against buildings on either side, looking north to one of Chicago's ubiquitous skyscrapers.  I'm sure it's ugly most of the time, but the photographer got it right here.
That's it.  Nothing special, just some cool photos.  Carry on.

2 This is why I play Sim City (and more recently, Cities: Skylines).  Cities are lovely to look at, particularly at night.  Incredibly intricate tinkly machines.


But I wouldn't want to live in one.

3 It DOES make our little metro light-rail network seem adorably quaint by comparison, I admit.

4 I love the concept of mass transit - when I have traveled overseas, I've enjoyed being able to simply hop on the S-bahn or whatever and get to town easily and (relatively) quickly - but it so does not work where we live. There are no zoning restrictions, and everything is spread out. Consequently, there really isn't a way to have a stop near your home that takes you to a stop near your work that doesn't involve walking for probably an hour or more. (Which would be fine as long as it wasn't 100 degrees and humid with a cloud of mosquitoes following you, or heavy rain soaking through your umbrella and trench coat and filling your path with fast-moving, ankle-deep water.)

Cool pictures, thanks for sharing!

5 The one major flaw of the "L" (and most of the CTA for that matter) is that its still tied to that 100 year old route plan. Its great for going from Somewhere to Downtown quickly, but surprisingly garbage at going from Not-Downtown to Somewhere-Else-Not-Downtown.

6 Karl, it's been a long time since I've spent any time on the 'L', and what time it was was going from Somewhere to Downtown.... or, to be more specific, O'Hare to Wrigley Field. (Blue Line to Red Line)
Having looked at the route map, though, it's hard to disagree with your assessment.