Now THIS Is A Helluva Picture 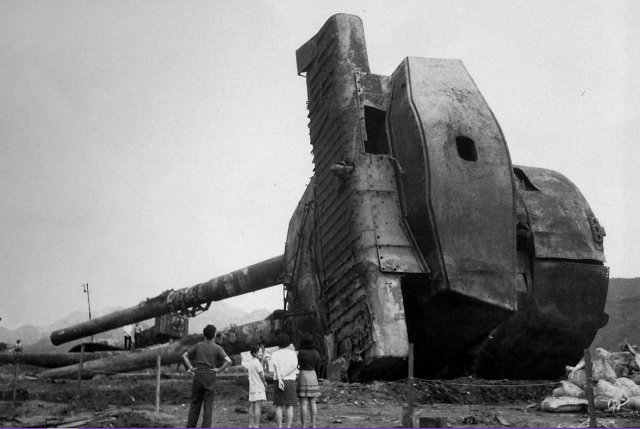 That is one of the Mutsu's main turrets after salvaging post-war.  The ship was in harbor in 1943 when it apparently killed itself, suffering a massive internal explosion that cut it in half.  Only some 350 men out of a complement of nearly 1500 survived.  The two aft turrets were salvaged in 1970-71.

What an amazing picture.

I hadn't properly appreciated just how much armor was on a battleship turret until I saw the Mo. You just... I mean, you don't encounter that kind of thickness of steel in civilian applications. Even really large girders aren't that much solid steel, usually. (And there were a couple of other positions which had almost as much armor, notably the helm...)

2 When I first saw this post, I thought it was another "name that ship" contest...

3 Dunno if it's true, but I recall reading once that the 17" armor of the Iowa could laugh off a modern Exocet missile.

4 It might, but that's only on the barbettes.  The turret faces have 19".  I suspect that an Exocet (or any other modern ASM) would have a shot at getting through the armor belt.  A pop-up attack profile would be even nastier, with a 7" armored deck.

Having said that, it's a 55000ton battleship... its very size is probably the best armor against a weapon with a 360lb warhead.

It all depends on where it hits, and what kinds of damage it causes. One of the earliest attacks on Yamato was by dive bombers, and one theory is that one of those bombs (500 lb.) started fires which eventually reached one of the magazines and set off an explosion which blew the ship in half.

That said, I don't think the Exocet is a pop-up-dive-down missile. I think it just sails in horizontally and strikes the target.

Another example: I assume you've all seen the gun camera footage from when a couple of P-47's belonging to the Tuskegee Airmen strafed a German (reflagged from Italian) destroyer in the northern Adriatic and eventually blew it up? I am pretty sure what happened is that one of the .50 rounds hit the warhead on a torpedo and set it off, and then all the other torpedoes on the rack. The resulting explosion was easily enough to blow the ship apart.

I don't think Missouri carried anything like that on its deck, and of course it was a lot bigger than that destroyer, but there was a lot of ordnance on that ship, and leveraging that kind of thing has a long and glorious history. (See e.g. HMS Hood.)

If a guided missile was designed specifically to attack heavily armored targets, like the Fritz X, then bad times would await the target, regardless of how heavily armored she was (Re: Warspite, Roma, et al.)

(And there were a couple of other positions which had almost as much armor, notably the helm...)

Unless you were on a new or rebuilt British battleship.

7 Was that turret thrown there by the explosion or removed in one piece during the salvage operation? The reason I ask is that the armor, barbette and main rifles are so heavy that they are typically cut up during scrapping and removed peacemeal.
Of course they might do it different in Japan.

8 I was able to find photos of the turret being salvaged.