NASA's Announcement Earlier today, NASA made the stunning announcement that they had found evidence of flowing water on Mars.  While tremendously exciting, I'm less than convinced by the imagery they're using as proof: 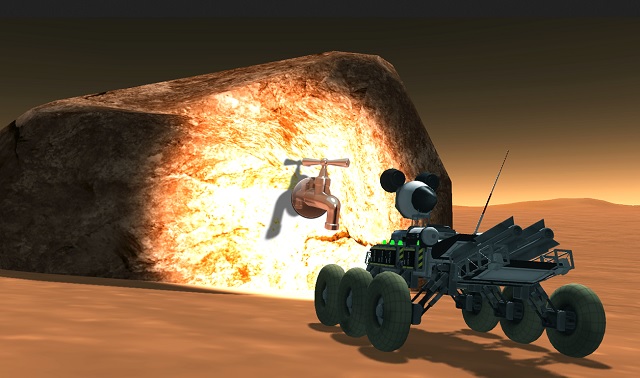 Something just doesn't add up...

No kidding! So many questions.....

Mars is cold; why is there only one faucet?  Whoever installed that must have hot water.

Also, the scale is all wrong.  Unless that's a really tiny rover.

And how did the rover wind up in the shot?  Who's taking the picture?  Don't we only have one functioning rover up there?  This is a worse hoax than that "moon landing" thing.

2 My big question is: since when does the rover have headlights?

MIKESKI IS A DENIER!!! EVERYONE CAST HIM OUT!!!

4 I remember back when the news broke that Curiosity not only wasn't sterile, but that the drill bits had likely been contaminated.  NASA's line at the time was, IIRC:  "It will only be a problem if we find water, but we don't expect to find water."

5 I, for one, welcome our new freshly-evolved-from-Curiosity's-bacteria Martian overlords.