Name This Mystery Ship XIV Easy one this time... 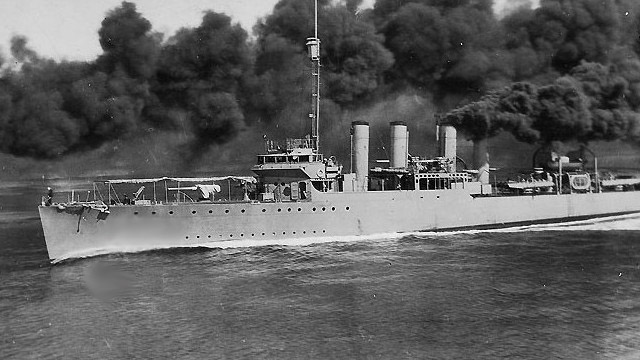 Get it right, win a post on a topic of your own choice.  No pr0n, politics or religion, but otherwise it's fair game.  Please, do not cheat with imagesearch or anything like that... I can't stop you and won't ever know you did it, but have some pride.

2 All I know is it's a four-stack destroyer. Based on "Hey! That looks like a model I had as a kid!" And the only one of those I know by name is the USS Ward, so. Sharper marbles than I possess are required to know the answer to "Hey, why isn't there a giant number painted on it, like every other photo of those I've ever seen?"

3 I can answer that last part, Andy: if it had the number on the bow, it'd give the ship away, which is why I photoshooped it out.  That's also why I shooped the reflection of the ship's number in the ocean out.

Alas, neither the Borie nor the Ward is this ship.

4 USS Buchanan, later HMS Campbeltown.  Good job photoshopping out the bow number... I was initially looking at Clemson-class boats until I realized it was a Wickes.
Her claim to fame is being stuffed with explosives and blown up during the St. Nazaire raid.

Got a topic?  Or should I just assume another Mystery Ship?

6 I have a thought for Mystery Ship that you should do, but I don't want to post it in comments for everyone to see, and you (understandably, I guess) don't seem to have an e-mail address on your blog.
Anyway another Mystery Ship of your choosing would be spiffy.

8 How can you tell that it's USS Buchanan? Are there unique identifying features if you know what to look for? Many of the other Mystery Ships I remember have been outwardly unique in some fashion, but this one looks to me to be just like the other zillions in the class.

9 Andy, my guess is that FDM knew about the HMS Campbeltown, and had seen the picture somewhere.  Or he did an image search.  Or he knows more about the 4-stack destroyers than anybody these days should know, and could tell it was a Wickes-class... and that there was only one Wickes-class DD that had an interesting story behind it.

10 I did recognize it as a Wickes-class destroyer (though the first thought that sprang to mind was the Clemson-class, with which I am more familiar).  Then I started looking through the Wikipedia pages for every Wickes-class ship (ugh, they built lots of 'em), until I found one with an interesting story.  Once I found the Buchanan I checked the photo gallery for that ship on navsource.org and there recognized the original picture with bow number un-photoshopped... http://www.navsource.org/archives/05/0513123.jpg

11 Incidentally, I tried image searching after I had already found it, just to see how easy it would have been to cheat, and Google image search didn't turn up a match for this one.