Name This Mystery Ship XIII Here we go again!  One neat thing about this ship is that I've got a personal story to tell about it... 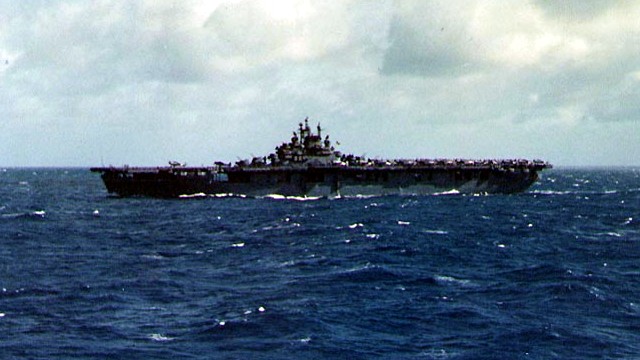 As usual, no imagesearch or anything like that.  I may not be able to prevent you from doing it, but you're less of a human being for doing so.  As is usual, the first to accurately name the ship will get a post on a topic of their choice, as long as it doesn't involve religion, politics or pr0n.

I'll tell the story when an accurate ID is made.  Good luck!

1 I'm guessing Intrepid. My reasoning is behind spoiler tag Wonderduck has a personal story about this. Only 2 Essexes have been not in mothballs since he was likely able to have sea stories. I don't believe WD is a naval aviator so it would not be Lexington...thus the intrepid museum.

2 Your reasoning is perfectly sound, except that the Lexington is also a museum ship.  In any case, it's not the Intrepid.

Since it is a short-hull Essex and you got a personal story, you make it pretty much LEXINGTON as the only possible choice - unless I am completely off on your age.

4 OK, I like this site, but why does it keep cutting me off at the end of pages? Nearly every page does this; I can clearly see that there's more material, but it won't let me scroll the rest of the way. What the hell?

5 Chris - I see the same thing quite often, and have to refresh the page to see it all.  I am using Firefox.  Are you also using Firefox as well, or something else?

This has been an issue here for a long time. Sometimes if you reload the page it gets relaxed and lets you scroll down further.

I've found that there's less of a problem in this regard using Firefox than when using IE. But it doesn't happen at all with  any other mee.nu or mu.nu blog I visit, so I can only conclude that there's something custom and strange in the site CSS here.

7 If there is, I sure didn't put it there!  Chris, it even happens to me, usually on the longer posts with many pictures.  I'm sorry, I wish I knew what was going on, but it's been occurring pretty much since Day Two.

8 We discuss this from time to time. I add explicit height to every picture tag (img), without exception, and that seems to help.

9 Perhaps the browsers can't handle this much duck content in one page fetch?

10 Pixy knows about the bug, it has something to do with the dynamic footers.  When I asked about it he fixed it for my site by disabling something, but I never asked exactly what, and if it was under my control or not.

11 I was testing it on my site on the weekend, and just turning it off doesn't always work if you have a long sidebar, so I need to re-do the CSS.  What I was trying to do in 2008 with this fiddly Javascript is a lot easier today, so long as I throw IE6 to the wolves.