Name This Mystery Ship XII Might be a fun one this time... or it might be ridiculously easy.  It'll be one of the two, for sure. 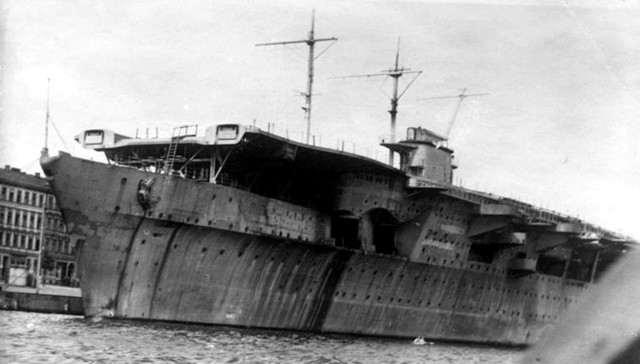 Usual rules apply: no Imagesearch or anything like that.  I can't do anything about it, but your victory will be tainted and hagridden.  If you DO win, you get a post on a topic of your choice!  While I don't do politics, religion or pr0n (other than F1 Pr0n), anything else is fair game.

So get your guessin' shoes on!

2 I'm afraid you're going to suffer a blues explosion.  The Lexington is an incorrect guess.

3 Graff Zeppelin.
The casemates and the oddball catapults  are the giveaway.

Time for a naval "what if?"  I've read that the Nazi long range plan was to start WW II in 1943, by which time they would have a "balanced fleet", including at least one aircraft carrier.  They had already built and were testing aircraft for it, including a carrier-based version of the Ju87 Stuka.

My questions is, assuming that their plans worked out, and the second World War started in 1943 at a time and stiuation of their choosing, what would they use their aircract carrier for?  I don't think anyone would consider using a carrier to support an invasion across the narrow English channel, and they expected a quick war where interdicting convoys would not be a factor, so what did they plan on doing with it?

Remember the Bismarck? Think that would have gone the same if Bismarck had been accompanied by a carrier?

Germany's naval problem was that all their major ports were bottled up. They could build big ships, but they couldn't get them out into the open sea to fight with them.

A blue water fleet with carrier air support could have done something about Gibralter, for example. (Or at least tried.)

There were three strategic constrictions between the German ship-building ports on the Baltic and the open ocean. Denmark was the first, but that could be solved by land invasion.

Bismarck actually made it past all three of them, but only by shedding all its escorts and proceeding alone.

...and it would have made it, had it not been spotted by a PBY, and then attacked at long range by English carrier-based biplanes. A German carrier would have made all the difference.

No guarantees the fighters from a German carrier would have shot down the PBY before it made its report (Even the Kido Butai did not have that much success doing so.) and considering the weather conditions in the fatal torpedo attack, it would have been doubtful any fighters would have made it into the air.  Of course, Goering did all he could to insure German naval aviation was stillborn - flying an ME 109 in the North Atlantic sounds positively insane.

Germany could have completed the Graf Zeppelin and maybe the Z Plan as well, but what would they have given up to free the materials for it?  Germany faced major resource and industrial shortages even before the war, far more than most people realize, and the Kriegsmarine usually ended up at the back of the bus since its was less important than the Army or influential as the Luftwaffe.  Even the projected date of 1945 would not have been possible, given the competing demands -  it is implied that the first of the  H-class battleships would have not been completed until 1946, even if their construction had not been postponed/cancelled by the war.

Of course, that also ignores what the other nations would be doing.  Nothing would be unsettling to a German crew than to break out into the Atlantic during 1944, only to find Lion and Temeraire and maybe a sister or four waiting for them.