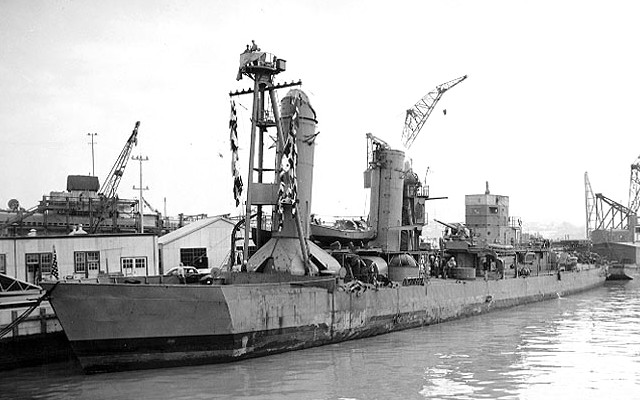 Once again, no clues or hints.  Leave your guess in the comments.  The first to give the correct answer will win a post on a topic of your choice!

And, for the record, I won't write about religion, politics or pr0n (though anime ecchi is okay).  Anything else is free game!

2 I know it's got to happen, but it's always sad to see pictures of great old fighting ships being prepared for salvage.

3 >"I know it's got to happen, but it's always sad to see pictures of great old fighting ships being prepared for salvage."

Very true, although in this particular picture she's actually preparing for re-construction after being grievously wounded at Pearl.

It took me a while to get this one; I couldn't figure out what *type* of ship it was supposed to be, but I kept thinking it looks sort of like a destroyer but with a strange, crude bow and no forward superstructure.  It took me a while to convince myself that the simplest explanation was actually the correct one.  Based on the shape of the funnels, I started looking for records of Mahan-class destroyers that had been severely damaged (at first I was thinking rammed or torpedoed), and that's how I came across the Shaw.  In hindsight, I remember having read about the Shaw's destruction, but had not realized the extent of the efforts made to salvage her.  So I enjoyed this challenge because I learned something new in the process of figuring out the answer.

Gee...Someone should make you try to ID a photo of HMS Zubian...

6 Where was this photo taken?

7 Vauc, that was taken at Pearl Harbor, or so the original caption says.