Name This Mystery Plane XXI Well, the F1 season is over, which means I'll have more time to do other things here on The Pond... but until then, here's a new Mystery Ship Plane! 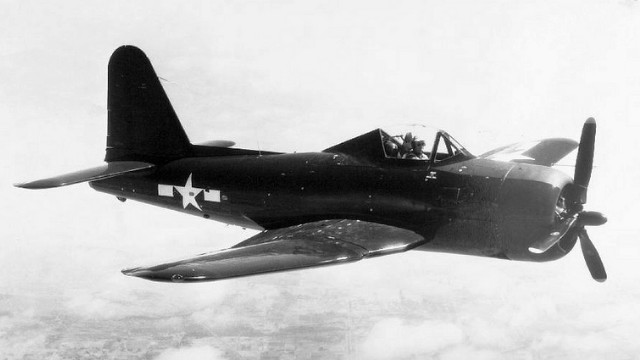 Since I suspect this is gonna be easy, there's no prize this time.  In this case, being first is its own reward, eh?  I've been fond of this one ever since I first found out about it some 20+ years ago.  Now, I can't stop you from cheating, but you're just losing any joy and thrill you might have gotten from winning clean.  So just don't do it, 'k?  K.  Have fun, and GUESS THAT MYSTERY SHIP PLANE!

1 Oooh that's a Ryan FR Fireball, isn't it?  Mixed power, prop in the nose and a jet in the tail.  Technology sure was in a state of flux in those days.

2 You know, I almost said XL5 Fireball... but that's a rather different beast entirely.

3 It's a Ryan Fireball, indeed... the first plane to land on a carrier using jet power only.

4 Where's the intake for the jet engine?  On the other side?

5 Ed, there are ducts in the wing roots.  They're small and covered by shadow in the picture above, but you can see them in this picture.

6 That picture is strange. It took me a couple of times to notice that the prop isn't turning.

7 That's why I chose it, Steven.  If you don't know what you're looking at, you just think "high-speed camera," or something like that... when the truth is something much cooler.

Oddly enough, the first time I read about the FR Fireball was in Fine Scale Modeling magazine.  I was quite impressed by the aircraft, probably more than the US Navy was.

As Wonderduck noted, it was the first aircraft to land on a carrier using using only jet power.  It turns out that was an unintentional necessity, since the piston engine had flared out.  The legendary Eric Brown, RN and FAA, made the first intentional landing using solely jet power in a Sea Vampire not long afterward.

9 Armament was only four .50s... I'm sure they had weight issues, but that is just unsatisfactory regardless.

10 I imagine it wasn't intended to see combat in that configuration.

11 The Fireball was designed to be a kamikaze interceptor.  It would cruise on piston power, then kick in the jet engine and use both piston and jet to get to where it was needed in a hurry.  For its job, the 4 x .50cal would do the trick well enough.  Not every plane can be a P-47, after all.

The truly sad thing is that it took the US years after WW2 to move away from the love of the .50 caliber HMG in favor of cannons on their fighters, which had consequences in the aerial fighting in Korea.

13 CT, the Fireball was a Navy plane.  Its chances of encountering German planes was somewhere between nil and none, particularly since its first flight wasn't until June of 1944.

As far as "wider employment" goes, it was also designed as a stop-gap until planes of all-jet propulsion were considered powerful enough (and successful enough) to go to sea.  It wound up taking a lot less time for that to happen than expected, which is why it was gone from service in 1947.

Well, that and an annoying propensity for its nose gear to collapse on landing.

14 Any aircraft used by the US Navy would, at some point, had been considered by the British for procurement via Lend-Lease.  But the Brits would not have wanted a fighter with only 4 HMGs, which was requirement that came from years of fighting German aircraft.  And given how armored frontline combat aircraft were by 1945, I doubt anyone else would have asked for the Fireball either.

15 And given how armored frontline combat aircraft were by 1945, I doubt anyone else would have asked for the Fireball either.

The US Navy did.  Or did you mean other than them?

Or did you mean other than them?

The Fireball might had an interesting time dueling with Georges, had the war gone on much longer...

17 To be fair, most US planes had an interesting time dueling with Georges.  The Fireball would hardly have been unique in that situation.